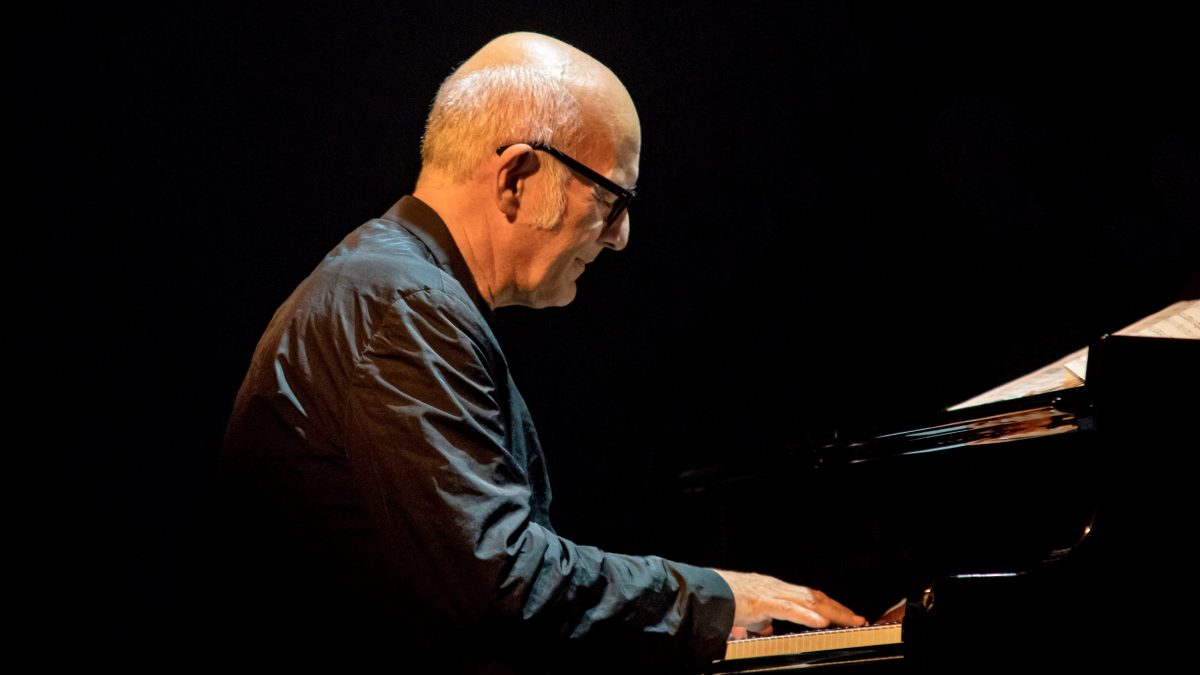 I never actively sought him out, he was never recommended to me by a friend and I never came across him by chance at a festival or a performance somewhere.

Instead he came to me through snippets of his work accompanying emotional scenes on TV. Some of these pieces were so affecting I found out who was responsible for them and started buying his albums.

I’m sure that in fan terms, this marks me out as a latecomer or even a dilettante, but so be it. To confirm this, tonight was my first Einaudi concert.

His music tonight is expertly crafted, serene and, dare I say it, catchy.

Yes I am aware that, in classical circles, accusing someone of writing catchy songs is to do them a great disservice. In fact, as part of my prep for tonight’s gig, I read some reviews of his tour so far.

One review caught my eye, as it accused Einaudi of the crime of being populist. The dictionary definition of this is ‘relating to or characteristic that strives to appeal to ordinary people.’

Coool, my first classical concert and I’ve already had a taste of the snobbery that is reputed to be endemic within the scene.

I think by populist, what the reviewer here is actually complaining about is that he is popular. God forbid the great unwashed should take a liking to an artist from their world! If this has been the case, that artist must be cast out, disparaged and accused of populism.

For what Ludovico Einaudi has managed to do is to crossover, to leave the cloistered hinterland of The Guardian and head to the album charts. And that will never do.

In truth, this was always going to happen. His songs appeal to people, they have a way of getting under the skin, of staying in the consciousness.

And, looking around the sold-out Philharmonic Hall tonight, plenty of people would agree with me. There is a real cross-section of people here tonight, from young to old, from hipsters to indie kids and all points in-between.

Maybe this is what the classical crowd don’t like.

Einaudi has invited this scruffy crowd into their lovely posh theatres, completely ruining their sedate evenings, getting in the way and buying Love Lane lager at the bar while they are queuing for their Chablis.

Whatever the situation, the crowd tonight are knowledgeable and appreciative.

As we enter the auditorium, the stage looks spartan and bare. A grand piano on one side and two chairs, a violin and a cello on the other. As the musicians take their place behind their respective instruments, the huge backdrop at the back springs into life and fills the stage with lights, taking away the austere edge.

Cleverley, the backdrop is mostly limited to black and white, save for an orange sunset effect towards the end. When used well, black and white can look very atmospheric and effective and such is the case tonight.

For the first song, the backdrop shows what appears to be geometric lines hung on several mobiles, while the second song shows a dividing line, black on one side, white on the other, that travels across the screen, from left to right or from top to bottom.

One clever effect with the backdrop is when it shows a grey scene with a blur towards the top left corner.  Over about 20 minutes, the focus sharpens and it reveals itself to be a snowy scene and the blur turns into a snow covered tree.

This might be my own journey into Einaudi‘s music. Once I was vaguely aware of who he is and what he does, but after a few years of playing his records I have formed an understanding of him and his oeuvre.

Einaudi performs tonight with Federico Mecozzi on violin and Redi Hasa on cello. Both cover themselves with glory, performing minor miracles with their chosen instruments.

In fact, as the more animated of the ensemble, the attention is drawn to these two more than Einaudi himself, who is hunched over his piano for the evening, with his back to a sizable chunk of the audience.

But this is not about showboating or grabbing the crowd’s attention; this is about the music. The minimal stage allows the music to command the attention and to take over the venue.

And what a noise they make, these three musicians. For just a piano, a violin and a cello they can generate a huge range of sounds. From Satie skeleton to huge crashes of sound, everyone present does exactly what the songs need to bring them to life.

Tonight Einaudi is playing tracks from his ambitious Seven Days Walking project. This saw him release seven albums over seven months, all inspired by his walks through the Alps. The tracks over the seven albums are variations on a theme, as the views on his walks were.

The music tonight is his rich, deep and thrilling. It lifts us up and brings us gently back down again, the range of moods expressed is remarkable. His playing is fluid and nimble without him ever feeling the need to lean towards showmanship, despite quite clearly having the skills to do so.

Wish You Weren’t Here: Pink Floyd and the fading appeal of band reunions

Einaudi and his band bring the set to a close with thunderous bass chords and some furious work from Mecozzi and Hasa and he is given a standing ovation and a round of applause the like of which I have never heard at The Philharmonic before.

He takes all this in his stride, gathering his musicians together for a bow. There is no vocal microphone on stage, Einaudi does not need this to express himself, so after a final bow, the musicians leave the stage.

The lights stay down though and a few minutes later, Einaudi appears on stage on his own and runs through a selection of comp[ositions from his other albums, joined again at the end by his string section.

A second standing ovation greets to end of the encore and, after two hours of some of the most blissfully perfect music we have heard, a very special night is over.

If Einaudi’s talent for writing beautiful and memorable pieces for public is enough to see him sneered at by certain parts of the music world, it is also enough to win him the love and appreciation of wider audiences the world over.

And tonight, we all felt lucky to be in the presence of this man and his songs.

No matter how I first chanced across Ludovico Einaudi, he now has a permanent place in my music collection and in my heart.