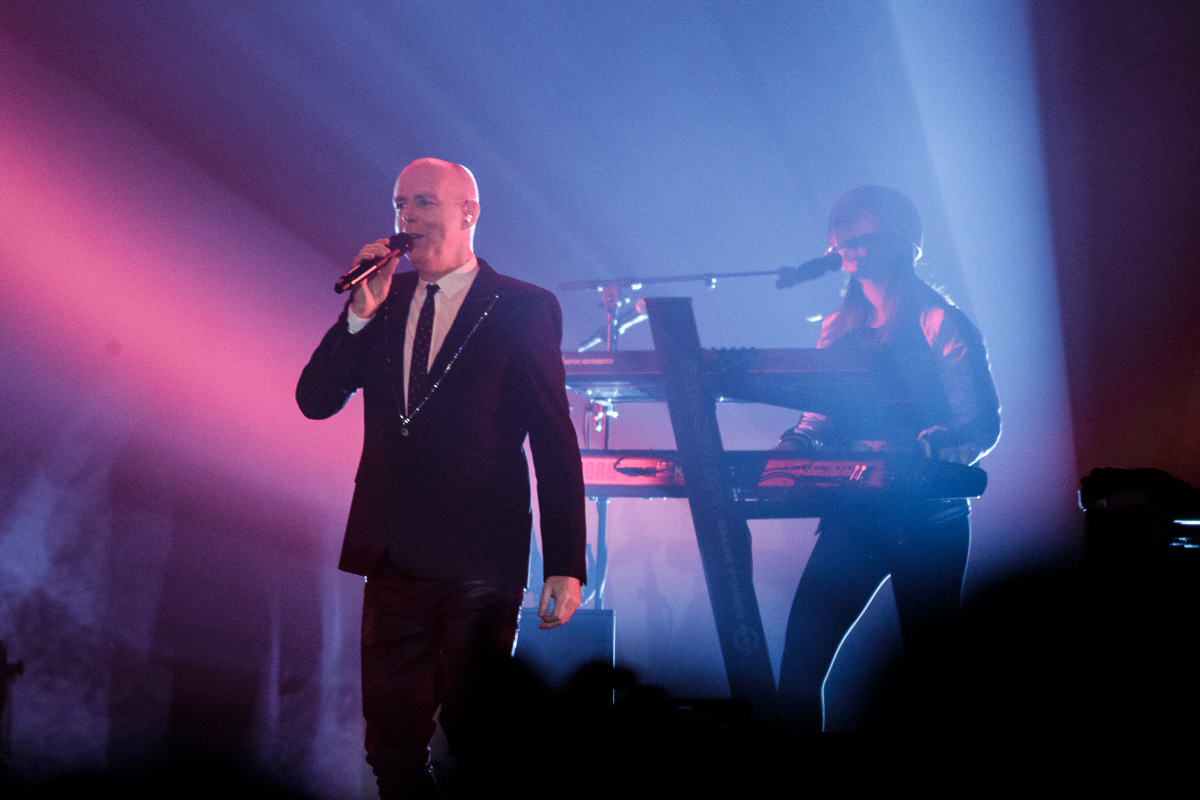 Pet Shop Boy Neil Tennant appeared at the Manchester Literature Festival to cheers and applause to talk about his book One Hundred Lyrics and a Poem, the Pet Shop Boys universe and poetry of the mundane.

Hosted by poet Andrew McMillan at the Royal Northern College of Music we had sixty minutes or so worth of interview followed by twenty minutes of open questions from the audience.

It should be noted that throughout Tennant was very forthcoming, with no questions seemingly off limits and although his acerbic wit was still to the fore, any faint prickliness that we’d seen in earlier interviews was absent.

Tennant is possessed with an instantly recognisable voice and combined with his relaxed manner and dry humour he entertained a largely thirty-something crowd including to a range of anecdotes and stories, most of which were new to us and the rest of the audience.

He ran through the background of the Pet Shop Boys, his career in journalism, song writing, the role of lyrics and what the future may hold.

He touchingly recalled how meeting Chris Lowe in a hi-fi shop changed everything and how “we filled in each other’s gaps” and if he hadn’t met Lowe he would probably have moved onto Q Magazine from Smash Hits and would now be a freelance journalist.

On wishing fellow Pet Shop Boy Chris Lowe a happy 60th birthday Tennant mentions how Lowe was filmed smiling behind his keyboards at the recent Hyde Park concert despite telling cameramen not to film his face during the gig. We got the distinct impression that being in the Pet Shop Boys is as much fun as it is hard work.

Moving onto songwriting Tennant admits that West End Girls was as much inspired by listening to the readings of Sir John Betjeman (with music by Jim Parker) as it was by Grandmaster Flash and when asked about dream collaborations, Tennant laughs:“Nina Simone would have despised us!”

He’s well known for his much-lauded role at the early days at Smash Hits. Tennant told the tale of when working at Smash Hits how he would scan the lyrics for the magazine, citing Spandau Ballet’s True as a song that was too busy and could do with some editing. A good yardstick to judge all pop songs by we reckon.

He also admitted that he chose lyrics for the book that looked good written down, and smiled when he said that was why S.H.O.P.P.I.N.G had been left out.

When he moved onto his own lyrics, he mentioned the joy of hearing a word like ‘haversack’ being put in a song (Being Boring) and how he was never interested in writing from his own point of view and preferred to play a character instead.

Tennant discussed how Irredeemably banal some lyrics were in pop when written down but came alive when juxtaposed with the melody while agreeing irredeemably banal would make a very good Pet Shop Boys song title.

Irony has, of course, a large part to play in the Pet Shop Boys world. Tennant explained that they were asked not to perform Opportunities as “the song has lost its irony.”

He remarked that they were slightly taken aback by this but in the ultimate ironic twist, it made them want to perform it even more.

In some exclusive news Tennant revealed recent single Dreamland featuring Years and Years was not representative of the forthcoming album.

He likened it to the release of So Hard (as the lead single from Behaviour) as an unrepresentative example of what an album might hold and teased the new album would be very different from their last two.

He wrapped things up by concluding on a pretentious level (his words) the Pet Shop Boys universe they had created was a great art work constantly being added to. Yet he lightens the mood and chortles in response to an audience question they wouldn’t play the tea time slot at Glastonbury as Pet Shop Boys only perform in the dark.

Great excitement in the Threatre @RNCMvoice waiting for Neil Tennant @petshopboys to take to the stage for @McrLitFest #MLF19 pic.twitter.com/HIpxMiiOZj

The events finished with Tennant reading the sad and moving lyrics to Your Funny Uncle – a song about a friend’s funeral. A poignant ending to a revelatory, and at times, a very funny evening.

With a smile, a wave to the audience and no showbusiness fuss, one of the most underrated lyricists in popular music quietly exited the stage. There’s more to the Pet Shop Boys than meets the eyes.