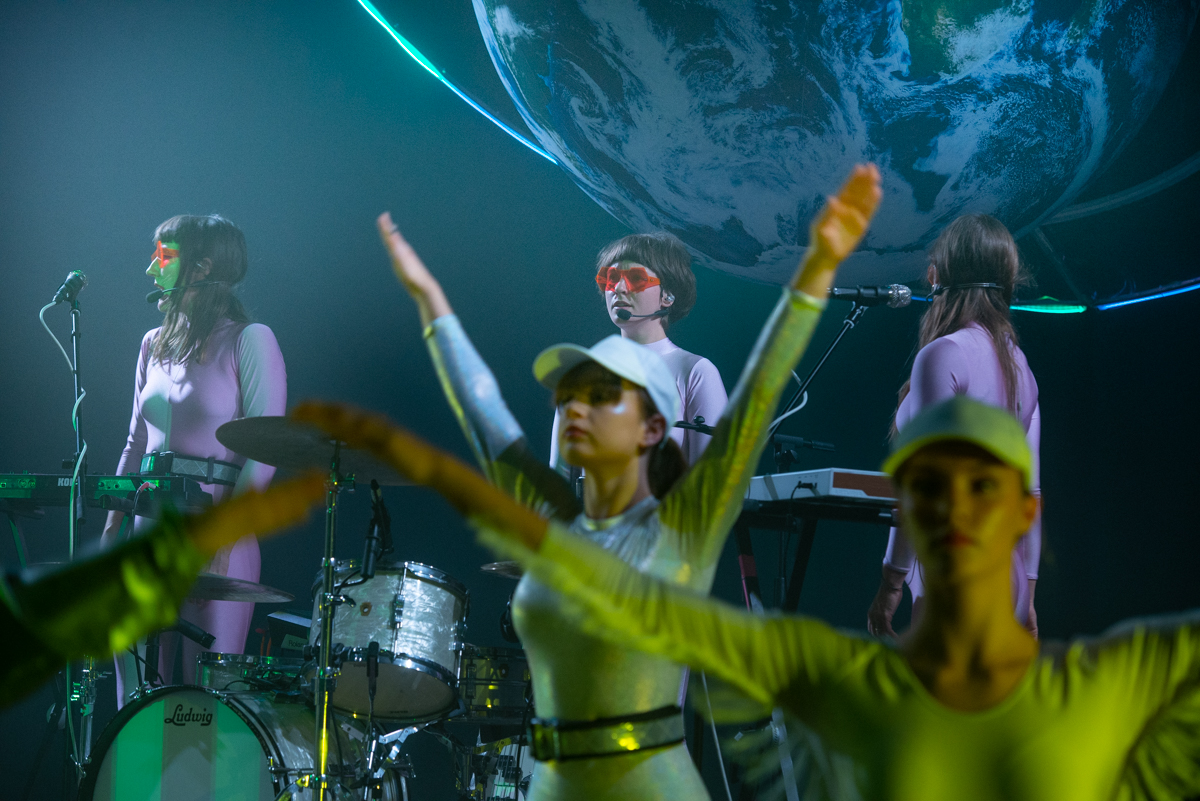 Stealing Sheep bring their Wow Machine show to the stage, Getintothis’ Banjo is treated to an evening of performance art like no other.

Stealing Sheep have a lot to live up to.

The last time they played Edge Hill was the first, I personally was completely blown away by what I witnessed, I described it in these very pages as ‘one of the best gigs I have ever seen.’

This is a description I have stood by ever since, the gig being forever burned into my memory as a special superb, untouchable performance.

So yes, Stealing Sheep have set the bar high.

On arriving back at Edge Hill tonight, I am again reminded of what a valuable venue this is.

Tucked away in the back roads in Ormskirk, it puts on gigs, comedy nights, spoken word, films and other types of performance.

It is also good friends with Stealing Sheep, who make their 3rd appearance here in less than two years.

Upon taking our seats, we can see that Stealing Sheep have again chosen to avoid a conventional stage, opting instead for a setup comprising of three small platforms, the highest of which has all their instruments crammed onto it.

This lets us know that, as we can expect from Stealing Sheep, this is not going to be a conventional gig.

So what is it? How can we describe what Stealing Sheep do live? Gig? Theatre? Performance art?

Well, all of these. And more.

The lights dim and what sounds like intro music begins. Eight dancers enter the stage area and start to move. The backing track contains spoken word sections that indicate all performers on stage are part of a video game.

The three members of Stealing Sheep walk into this and join in, band and dancers swaying and moving in their performance area.

Eventually, they climb the stage and take their instruments for the first song proper. The dancers stay and add a huge visual presence to the band’s performance.

This is almost visual overload. There is so much going on that it is difficult to know where to look. The band have effectively understated their own importance in the show.  The spectacle, the happening of it all is what is important, egos are not.

The music Stealing Sheep make is hard to pigeonhole, and one gets the impression this is a natural extension of the people involved in making it.

At times we are reminded of the early 80s, at other times it feels like we have been given a glimpse into the future. There is a vein of post punk running through this, in the way that the music seems built to be different and in some of the vocal stylings.

The picture presented to us sometimes feels like a 70’s sci-fi vision of what the future would look like and I am reminded, for some reason, of films like Logan’s Run.

There is definitely a cinematic quality to Stealing Sheep live that seems like we are living in a film, a science fantasy that has been brought to life around us.

The dancers briefly leave the stage and Stealing Sheep play Show Love in what tonight passes for a fairly conventional manner. Then the band leave the stage and stand in front of the audience singing percussive sounds into their headset microphones.

The lights dim to near blackness and they start to stand in line and dance as they sing, although dance is not quite the right word.

Given the darkness, we can barely them make out as they move. This to me sums up much of their aesthetics, even though it isn’t obvious, necessary or even readily apparent, they still see value in performance.

The fact that we might not be able to see it clearly doesn’t mean that there isn’t value in the art they create.

The middle of the set is again just the band on their small raised stage running through their songs, although ‘just’ doesn’t do justice to the way the approach this.

Even during the most ordinary part of their show, they still approach the concept of a gig from the leftfield, there is still a great deal of performance art about how they do what they do.

This is evident in the synchronised head turns and other movements as well as in the way they approach their instruments. None of the band seem to need to look at their instruments when they play, instead choosing to continue the elements of dance that seem as intrinsic to them as their musicianship.

There are no straightforward rhythms, no straight 4-4 beats and everything sounds as if it shouldn’t actually gel together.

But it does, magnificently.

Drummer Lucy Mercer is hypnotic to watch, her unique drumming style involving lots of stops and starts while still providing a steady beat from her kit.

Emily Lansley on bass provides unusual, irregular basslines that do a great deal to hold the songs together and gives some fluid funk to proceedings.

Rebecca Hawley is the most animated member of the band, the one who is soonest to let her android stage persona drop behind her keyboards.

They seem to be ridiculously good at everything they do. Their musicianship is superb and inventive, their vocals and harmonies are spectacular, their dancing is effortless and they have the vision and determination to put a show like this together when most bands would be content to stand there and work through their standard set, just like they will at every gig.

A Stealing Sheep gig always seem to contains some kind of revelation, some surprise. It seems we should learn to expect something unexpected.

There is an easy femininity to what Stealing Sheep do that seems to come completely naturally from them.

This goes beyond the rejection of traditional, macho band stereotypes and cliché, but is something that never seems forced or pointed.

The fact that they can wear skintight, near flesh-coloured body stockings and still not come across as this being sexually motivated or provocative speaks volumes about the band and their intent and can only be done by the sheer power of their personalities.

This is about them being comfortable and confident within themselves, they can stand in front of an audience with nothing to hide, nothing to prove and nothing to conform to if they so choose.

For the last song, the band again move to the front of the audience to sing, this time asking for cheers from the audience, who are only to happy to give them.

Matching with the computer game instructions that are being played over the PA, they drag Getintothis’ photographer Marty Saleh to the front to take a photo of the audience, as seen in our gallery below.

After 90 minutes or so, the band and the dancers work their way out of the performance area and the lights go up on another phenomenal Stealing Sheep performance.

It is clear that the band operate outside of the norm, away from convention and beyond the reaches of most band’s abilities or vision. I can think of no other band who would be prepared to put this amount of effort into a gig that may well be a one off to a fairly small crowd.

Again, it is their art that matters, not who or how many there are to see it.

I leave the venue amazed, slightly shocked and aware that I have seen a band that represent the very best that music and performance can offer. 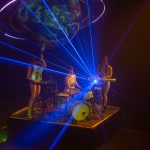 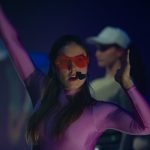 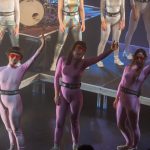 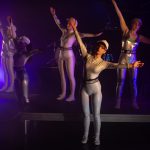 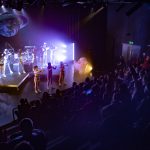 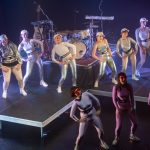 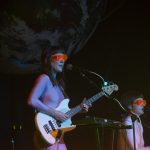 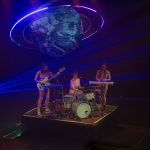 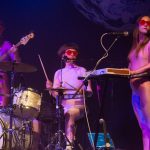 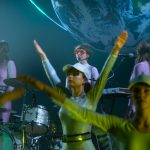 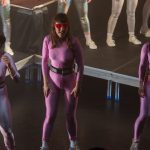 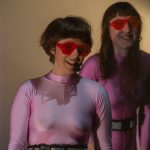 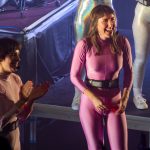 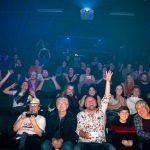