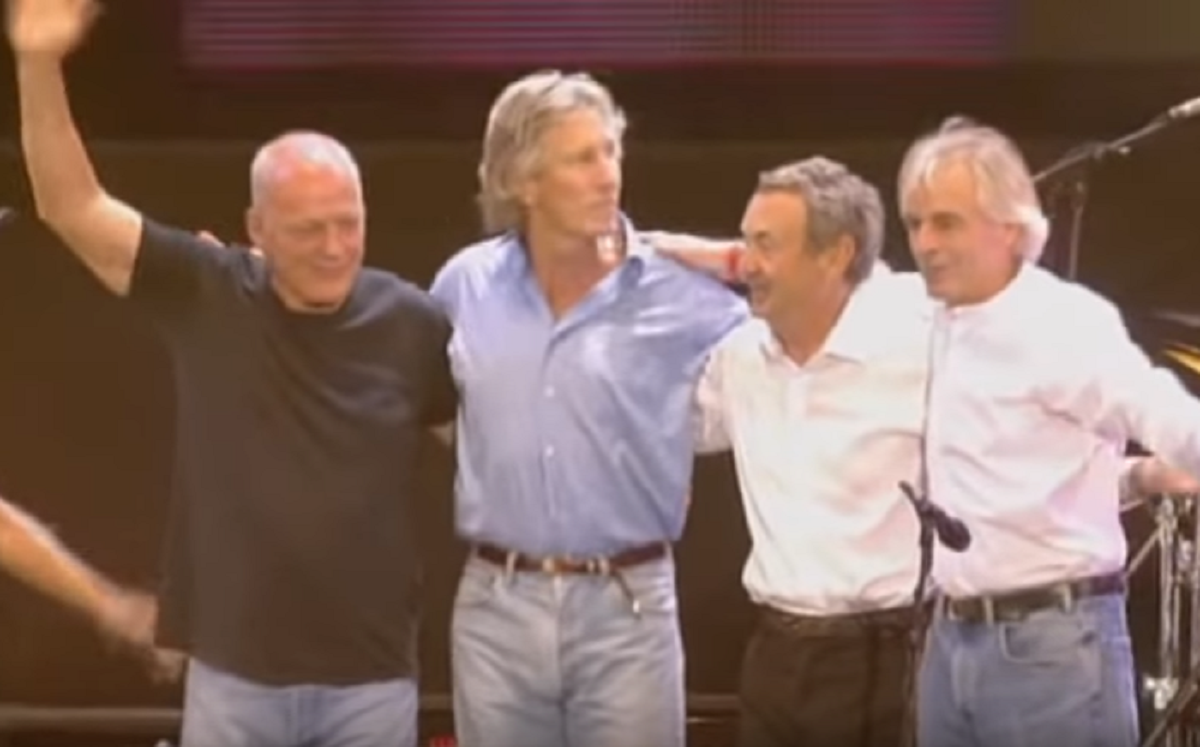 Do bands have a sell by date – Getintothis’ Gary Aster wonders whether bands should reform when their creative peaks are behind them.

Some of my earliest childhood memories involve Pink Floyd.

My dad was (and still is) a fan and I vividly remember hearing and being a bit frightened by the chiming clocks at the beginning of Time when I was about 3 years old.  A similar thing happened later when I was a bit older, hearing what I mistook for whale song during Echoes and again being slightly unsettled by these mysterious sounds.

I was always intrigued by them. They made strange music like nothing else I’d ever heard. They seemed very peculiar and I would spend hours staring at the weird and wonderful images on my dad’s Floyd record sleeves.

I saw them live at Manchester Maine Road when I was 15. That’s a good age for something to leave a lasting impression on you, which is exactly what it did.

They became my all-time favourite band and have remained so ever since. It’s difficult for me to think and write objectively about them.

I mention all this mainly to establish my fan credentials before uttering a Pink Floyd heresy.

Roger Waters, formerly of Pink Floyd of course, has been characteristically caustic in recent interviews to promote his new concert film. It wasn’t the lavish praise that he heaped on his own gig that most caught my attention in these interviews however, but his unprompted remarks about his former Pink Floyd bandmates.

Waters offered some faint praise for Floyd drummer Nick Mason’s new band, who are still touring intermittently, with a set of early Pink Floyd numbers that both Waters and David Gilmour have largely ignored in their respective live solo shows.

One interviewer, perhaps pleased that he’d somehow managed to get Waters to say something that didn’t make him sound like an unjustifiably bitter Alan Partridge, pressed him further on this topic only for Waters to declare that, unlike Nick Mason, ‘playing in pubs’ was ‘the last thing he wanted to do.’ Ouch.

Again unprompted, Waters then raised the subject of a potential Pink Floyd reunion, laying the blame for the continued non-appearance of such firmly at David Gilmour’s door. He told the interviewer he understood how much of a disappointment this must be for Pink Floyd fans.

Well Roger, here’s the thing. Although I can’t speak for anyone else, I’m not disappointed at all. The last thing I want to see is Messrs Gilmour, Mason and Waters sharing the stage once more and calling themselves Pink Floyd.

I’m generally of the opinion that, once they’ve split up, bands should not re-form. Pink Floyd especially so.

Pink Floyd effectively split up twenty five years ago when they stopped touring and recording. At that point it could honestly be said of them that they’d had a very long and largely successful innings and could now retire from the crease with their reputation still more or less intact.

In 2005 the world saw Pink Floyd briefly and unexpectedly reform for a one-off 20 minute, four song set at Live 8, made possible partly by a slight thawing in the thorny relations between Waters and his former bandmates, and partly by the dogged determinism of Bob Geldof.

The classic four piece Pink Floyd line-up took to the stage at Hyde Park that evening and it was glorious. They sounded magnificent and as they left the stage, I figured that that would probably turn out to be the end for Pink Floyd, and that it was a good way to go out.

There had been no official announcement to this effect, but it did seem to me to be a farewell gig, and in some ways, so it proved. Pink Floyd at Live 8 ranked alongside the Beatles’ farewell on the Apple rooftop. It just had that sense of occasion about it – a historic moment; a mythical ending.

Waters dedicated Wish You Were Here to Syd Barrett. It was one of two songs they played that night that was partly inspired by the band’s legendary, original leader.

Though he had long since departed from the band and the public eye, Syd was at that time still alive, absent on stage but not forgotten. It brought a sense of completion to the band’s performance.

Syd Barrett – Remember When You Were Young, You Shone Like the Sun

It was a short, sweet, civilised and terribly English farewell, and aside from the Syd tributes, it was largely an unsentimental one. ‘You guys never properly said goodbye’ had been part of the pitch Bob Geldof used to talk them into this reunion and it had worked. Now, seemingly, they had finally said goodbye.

That this was, in fact, Pink Floyd’s goodbye seemed to be officially confirmed when news of the hundreds of millions of dollars they had turned down for a reunion tour broke soon after.

Later David Gilmour spoke of having ‘no time for Pink Floyd’ and Roger Waters made it clear that while he would ‘roll over’ and compromise with his old bandmates for a short, single performance, he was not prepared to do so for an entire tour.

But Live 8 is a good ending to the story. Like Pulp Fiction’s conclusion, everyone’s still alive.

There’s a resolution of old conflicts – careful with that axe Eugene cos we’re gonna bury it live on stage. I mean, if you were shooting the film biography of Pink Floyd, you’d end it here.

All good stories deserve a good ending. The legend of Robin Hood is nothing without that last arrow fired to determine his final resting place. We tire of things, like the Rolling Stones and The Hobbit movies, which go on for far too long, and way past their prime.

A year after their Live 8 performance Syd Barrett passed away and he was followed by Floyd keyboard player Rick Wright in 2009. This seemed to seal the lid on the band. Their story was over. Pink Floyd was definitely no more.

Following Barrett’s death, at the tribute show to commemorate his life and work all four surviving members of the band appeared, but not as Pink Floyd.

Gilmour, Mason and Wright played together, but billed under their own individual names (and pointedly not as Pink Floyd), as did Roger Waters independently. At the time, this was interpreted as further of evidence of the band’s demise.

However, since then, few bands have had rumours of their imminent reunion circulating with such regularity as Pink Floyd.

Their name has repeatedly cropped up, for example, as potential Glastonbury headliners and there was a palpable sense of disappointment when the band was not announced for the 2020 festival.

I find this confusing however. Glastonbury is not a natural environment for them and is hardly conducive to the sort of stage managed control freakery involved in a Pink Floyd gig. Plus there is a bit of historic tension between the festival and David Gilmour which makes it unlikely that he would agree to appear there.

But really, apart from making three very wealthy men even richer, what would be the point of such a reunion? None at all as far as I can see.

As a rule of thumb, band reunions are not a good idea and rarely achieve more than to make a bit of cash whilst tarnishing the reputations of the bands in question.

Bands have a natural shelf-life. The fate of those who attempt to outlive that shelf-life is merely a slow, very public deterioration. Those who doubt this are invited to watch the Rolling Stones’ woeful performance at Glastonbury some years ago.

Like all rules of thumb, there are exceptions of course. The Stone Roses’ comeback was clearly, for them and their fans, a triumph.

It’s rare for a band to return sounding better than before, but that’s true in this case, particularly when it comes to Ian Brown’s singing. But perhaps it also worked because, prior to their split, Stone Roses were hardly prolific and had already taken two very long sabbaticals. A reunion in their case was par for the course.

Blur’s 2009 re-formation was successful and worthwhile, but their return, like Pink Floyd’s, was equal part reconciliation, part reunion.

It also led to more than just a lucrative tour, spawning a handful of new singles which pre-empted 2014’s The Magic Whip, an album easily the equal of anything Blur released during their ‘90s heyday.

But other reunions have, I think, often been rather grubby affairs which have damaged the credibility of the bands in question; bands like Velvet Underground and Sex Pistols for example.

The reason those particular two didn’t work, I would argue, is that both bands belonged to very specific moments in time, long gone by the time of their respective reunions, and to very particular contexts.

Once removed from those times and contexts, their music lost much of its original power, leaving only nostalgia in its place.

Velvet Underground and Sex Pistols were both bands with very distinctive and significant identities. Those band identities were the sum totals of the band members themselves. But by the time of their reunions all of them were very different people.

Johnny Rotten was no more. John Lydon could certainly switch it on again as a performance, sure. But he was no longer the same person who originally inhabited and personified those classic songs. They didn’t mean it, maan.

And then of course there is the matter of money. No one could seriously accuse the Velvets or the Pistols of being in it purely for the money the first time around.

Now, of course bands have to make a living like everybody else does, and we can’t blame them for wanting to capitalise on their reputations later on, but it does cast everything in a different light than before.

Part of the reason why Pink Floyd’s one-off Live 8 reunion was a success, I think, is that it clearly wasn’t something that they did for the money. If the surviving members of the band now agreed to tour as Pink Floyd few could realistically think their motives to be anything other than financial.

But more importantly, from this fan’s perspective, it would rather ruin their glorious ‘goodbye’ at Live 8 if it should later turn out to have been merely ‘au revoir’.

Band reunions aren’t, I suppose, necessarily a bad thing as such, but they’re often done in the wrong way or for the wrong reasons.

Inevitably fans will compare bands in their prime with their later reunited line-ups, and in most cases the latter day version will be found wanting in some way.

It’s not because the bands have grown older as much as it’s because popular music typically belongs to a distinctive period or moment and tends to be diminished outside of that context.

We should accept that bands hang around for a while then split up and that it’s ok to call time on them. We should resist the urge to yearn for their reunions.

The Beatles’ entire remarkable career unfolded in the same amount of time it takes Radiohead to make about two albums.

There’s a completeness and finality to the Beatles’ story that’s somehow fitting. Of course, the Beatles never had an official reunion but their Abbey Road rooftop performance was the first time they’d played a gig for some years. And of course it was their farewell.

So perhaps we’ve arrived at a truth here. A band reunion can work if it’s also a farewell. It worked for the Beatles and it worked for Pink Floyd (assuming David Gilmour’s wisdom continues to prevail and they don’t spoil it).

Perhaps that idea could even reunite Liam and Noel – ‘C’mon lads! One last time, it’ll go down in music history and you’ll never have to see each other again.’