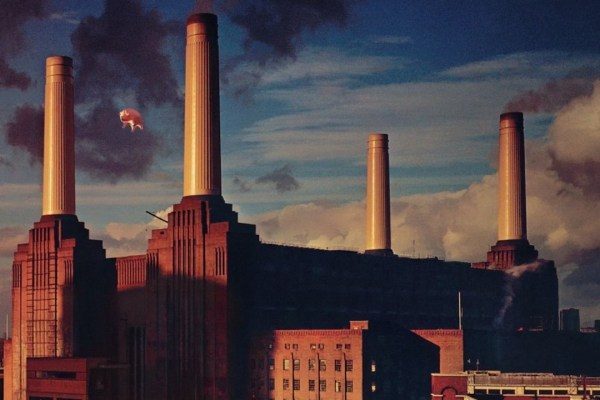 A decade separates Animals, Pink Floyd’s 10th studio album marking its 40th anniversary this year, from the band’s 1967 debut, yet the two records are worlds apart both musically and lyrically.

Gone are the whimsical and psychedelic, fairytale songs of early band leader Syd Barrett and in their place is a suite of hard-edged, world-weary and expansive prog rock pieces, credited largely or solely to bass player and singer Roger Waters.

For some fans, though not this writer, Animals is their best work. For others it is a flawed yet still compelling collection of angry, even bitter songs largely without precedent in Pink Floyd’s canon up to that point, and certainly ranks among their better albums.

Animals probably marks the point at which Roger Waters seized full control of Pink Floyd, although it was a gradual transfer of power rather than a sudden and unexpected coup. Certainly the band’s two previous albums, which had propelled them to their greatest commercial and artistic success, were both much more collaborative efforts and the song-writing credits reflected this.

But of Animals four songs, three were credited solely to Waters and the remaining track was credited to Waters and guitarist David Gilmour. This marked a significant shift and established the pattern for the two albums which followed it.

It was the first Floyd album on which keyboard player Rick Wright failed to receive a single songwriting credit. Wright would later be forced out of the band during the recording of their next album, The Wall. Animals was also the last Pink Floyd album to receive the thumbs-up from influential DJ John Peel, who played it in full on his Radio 1 programme the week before its UK release.

Several critics writing at the time of the album’s release also speculated on the influence that punk may have had on the record, but this is misplaced. About half of the music had already been composed and arranged at least three years earlier (long before punk) and two of the album’s four tracks had been part of their live sets since 1974.

Those same two songs had originally been scheduled to appear on the band’s previous album, but were held back for its follow-up on the grounds that they didn’t fit in with the slow-to-emerge concept of Wish You Were Here. Actually, in their early, prototype form they didn’t quite fit in with the concept of Animals either, but with new titles and re-written lyrics, a focus for the album gradually emerged.

Like the two multi-million selling records which preceded it, Animals was a concept album of sorts, although its concept was rather a loose one. The lyrics are chiefly concerned with Roger Waters’ decidedly misanthropic view of his fellow human beings, whom Waters divides into three basic types – dogs, pigs and sheep.

For this reason it has repeatedly been described as Orwellian, but in truth, aside from the surface comparisons one might make to Orwell’s Animal Farm, the similarities begin and end there. A more likely, but less familiar source of lyrical inspiration was the poem Meat by Brian Patten. Certainly Waters referred to it in interviews at the time.

Animals is bookended by a song of only two verses that begin and end the album. Pigs on the Wing offers one of the few glimpses of light and optimism to be found here and was brought to the studio by Waters when the band were nearing completion of the recording. It is credited solely to Waters, and in truth consists of little but Waters singing to his own simply-strummed acoustic guitar chords. Underneath all of Waters’ animal-imagery lies a simple, if unusual love song not unlike Neil Young’s A Man Needs a Maid. Beginning in this way puts what follows it into a necessary and wider context.

Dogs had a long gestation period. It was originally entitled Gotta Be Crazy. This early and much shorter version of the track was added to Pink Floyd’s live set in 1974 and was widely bootlegged, only receiving an official (and limited) release as part of the Wish You Were Here Immersion boxset in 2011.

The recorded version takes up nearly the whole of the first side of the vinyl LP and is greatly expanded. This is the only track from Animals that isn’t solely credited to Roger Waters and it shows. Though not an instrumental, the track largely consists of prolonged instrumental passages and Gilmour’s playing, particularly to the fore here, is outstanding throughout; detuned multi-tracked guitars swirl in abstract chords; shifting keyboard sounds shimmer amidst echoing dog barks and Gilmour’s guitar soloing soars to epic heights.

Lyrically it’s tempting to see the song as at least partly autobiographical and confessional – a successor to If from Atom Heart Mother, which presented the listener with a warts-and-all baring of Waters’ troubled soul. The Dogs of the title are those who lack empathy – not necessarily evil or malicious, but able and willing to act with brutal and calculating self-interest at others’ expense. Dogs presents us with a world red in tooth and claw, in which only those prepared to “strike when the moment is right” and “stick the knife in” will prosper; a world in which even the fittest who survive and thrive will still eventually die in disillusionment. It’s a bleak and uncompromising vision.

Side two begins with Pigs: Three Different Ones. Musically, the track revisits the stomping almost-funk of Have a Cigar from their previous album, this time driven by a fretless bass part played by David Gilmour. Gilmour is also responsible for the two short bass solos on the track and, of course, the final guitar solo during the coda, which is played through a Heil Talk Box, possibly used to mimic the sound of pigs. In the studio the track runs to around 11 minutes before fading out, but live it was prone to stretch to almost 20 minutes, extended by an additional solo from Rick Wright’s Mini-Moog and a prolonged coda.

The track also shares something of the world-weary cynicism and satirical bite of Have a Cigar. Waters’ targets in two of the song’s three verses are non-specific stereotypes. The pigs of the title represent those with ill-gotten, wealth, power and privilege who manipulate and oppress others.

The third verse however had a particular target in mind – Mary Whitehouse of the so called Viewers and Listeners Association. Whitehouse was a Christian campaigner for “decency” in broadcasting, publishing and the arts more generally.

David Cronenberg – Censorship, morality and a side-swipe to the establishment in Videodrome

It was she who led the charge against the magazine Gay News and achieved one of the very few successful prosecutions in the UK for blasphemy for a poem it had published. She was a well-known public figure in the UK during the 1970s but was unheard of elsewhere, leading some fans, especially those in the US, to assume that “Whitehouse” referred to 1600 Pennsylvania Avenue.

Sheep, the album’s penultimate track, though again credited solely to Waters, benefits greatly from Wright and Gilmour’s contributions. It begins with the sound of sheep grazing and Wright’s memorably jazz-infused electric piano which establishes a mood of uncertain foreboding before giving way to an aggressively sung and played verse, driven by Waters’ partly recycled one-note bass-line from One of These Days.

Originally the track was called Raving and Drooling and featured a spoken word section produced by randomly cutting up then re-assembling an off-air recording of a radio DJ. On record this section was replaced by a chillingly re-written version of Psalm 23 solemnly intoned by drummer Nick Mason and accompanied by Wright’s icy keyboards.

The track concludes with a riff-heavy coda as Gilmour hurries through a descending sequence of major chords. The mood lifts to something almost triumphal, befitting the unexpected happy ending as the sheep rise up in violent revolution and overthrow their oppressors, although it is, presumably deliberately, an ambiguous conclusion with the listener uncertain whether this is merely a sort of dream or unfulfilled wish.

The album ends as it begins, coming full circle with a reprise of Pigs on the Wing, written because Waters had recently fallen in love, though he could hardly be said to speak of love (or his new partner) in the most flattering terms – “somewhere safe to bury my bone” – but the lyrics are of-a-piece with much that went before and the overall tone is surprisingly hopeful for a record with so much cynicism and nihilistic despair.

It’s an album that the post-Waters Pink Floyd avoided altogether, although they initially rehearsed Sheep for their 1987 tour before (probably wisely) deciding that Gilmour’s singing voice lacked the necessary shrieking quality of Waters’ delivery required to really pull it off.

As a solo artist however, Roger Waters has repeatedly re-visited Animals and it is set to be a centre-piece for his forthcoming tour. He’s even embraced the American misunderstanding which took the name Whitehouse to refer to the home of the President, and Pigs: Three Different Ones now fulfils the role of an anti-Trump anthem admirably. Brilliantly, Waters premiered this newly requisitioned version of his song in Mexico.

As an album, it lacks the diversity of moods and variety of sounds evident in prior Pink Floyd offerings and few would consider it to be their best work, but it is still certainly one of their most compelling, focused and, above all, angry records. It is also arguably the last time that Pink Floyd operated as a properly functioning four piece before descending into the bitter acrimony and in-fighting which dogged their career afterwards.

They were never the same band again after this record, more’s the pity.