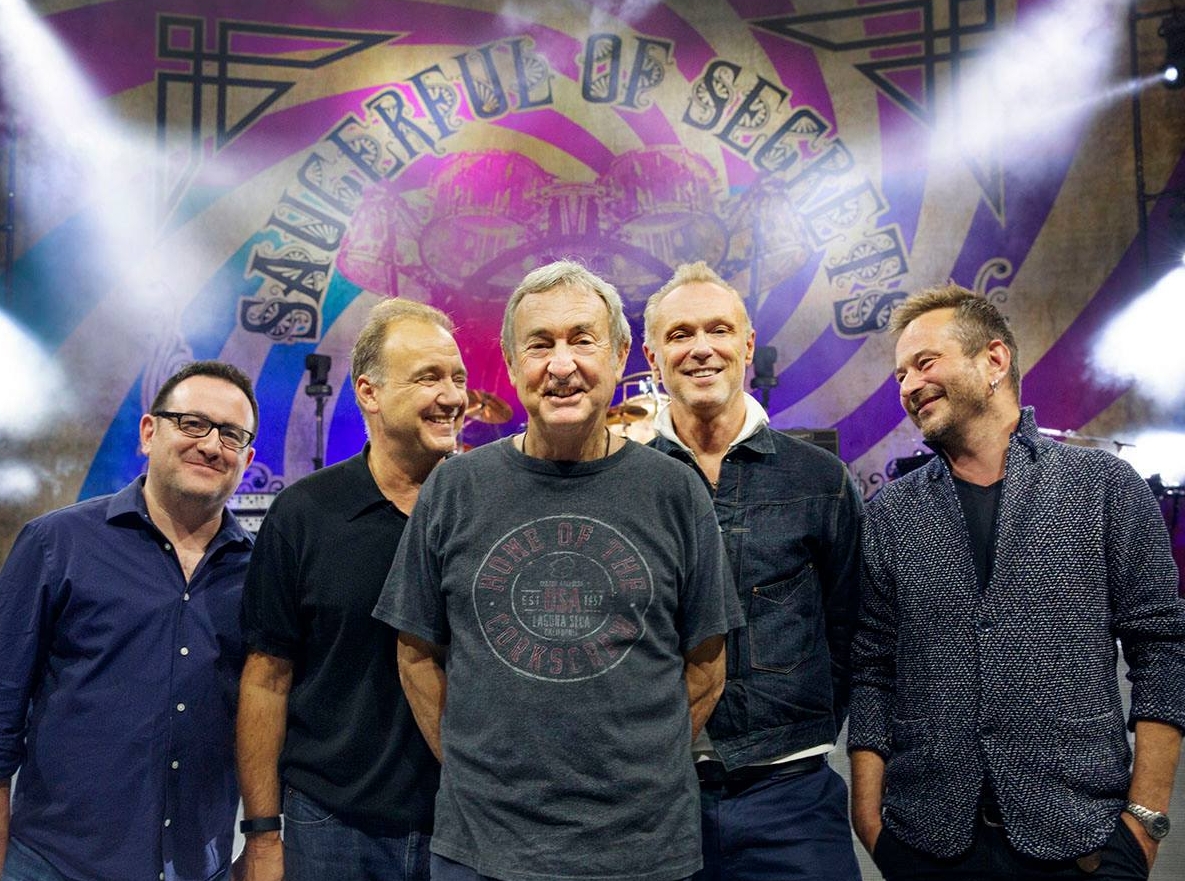 Nick Mason brought his Saucerful of Secrets to Manchester and Getintothis’ Gary Aster was there to lap it all up.

What an unexpected treat for Pink Floyd fans this was, especially those whose interest in the band extends further back than Dark Side of the Moon.

Nick Mason, the witty and unassuming chap occupying the Pink Floyd drum stool, and the only band member to appear on every Pink Floyd album and tour, once quipped that the words “I’m still not sure the band is officially over” would appear on his gravestone.

Finally however, it appears he’s run out of optimism and patience with the surviving members of his former band, accepted the inevitable and taken matters into his own hands.

We should be very grateful that he’s done so because this gig was a triumph. It was also a world away from the most recent tours undertaken by Messers Gilmour and Waters, whose live shows are generously punctuated with selected highlights from the Pink Floyd back catalogue, but who rarely venture further back in time than Dark Side of the Moon.

In contrast, Mason is all about the early stuff, eschewing the band’s most well-known songs in order to highlight some of their more obscure material.

And unlike his former bandmates (especially Roger Waters), Mason is not content merely to hire a bunch of rigidly-controlled session musicians in order to re-create the exact sounds and arrangements already familiar to anyone who’s heard the studio albums. This was a much looser show, and was all the better for it. That approach seems far more faithful to original spirit of Pink Floyd live – bolder, less predictable and more open to improvisation.

Improvising on stage is a risky business of course, akin to performing without a safety net, and there were a few moments when the band wobbled ever so slightly, but they didn’t fall off, and this surely makes for a more thrilling show than the mechanical reproductions of Waters’ or Gilmour’s uber-session-musos. But perhaps it is unfair to make these comparisons when Mason has clearly gone to some lengths to side-step them.

Joining Mason on this nostalgic trip back to the dawn of English psychedelia are a few familiar faces for the Pink Floyd faithful. Guy Pratt, who has toured extensively both with the post-Waters Floyd and with David Gilmour, is on bass and vocals, generally singing those parts originally sung by either Roger Waters, or Pratt’s late father-in-law and Floyd keyboards man Richard Wright. Former Spandau Ballet guitarist and songwriter Gary Kemp takes on guitar and vocal duties, ably filling-in for Gilmour and the late Syd Barrett. Former Blockhead Lee Harris also joins them on guitar and Dom Beken, who has previously worked with The Orb and Richard Wright, takes on keyboard duties.

The evening begins, rather daringly, with ‘Interstellar Overdrive’, arguably one of the most uncommercial and far-out things the band ever recorded. It’s certainly a lively set-opener and the band throw themselves into the track’s more noisy and experimental sections with obvious enthusiasm. It’s swiftly followed by ‘Astronomy Domine’, another Barrett track from Pink Floyd’s debut which, together with tonight’s opener, makes a compelling case for the view that the Barrett-era Floyd invented space-rock.

Syd Barrett’s songs punctuate tonight’s set at regular intervals and Mason takes the time to acknowledge his hugely significant, though brief, contribution to Pink Floyd in between songs. In fact, at various points all of Mason’s former bandmates are name-checked and thanked (in the case of those departed) or affectionately mocked (in the case of those still with us). But it’s Barrett whose name gets the biggest cheer from this (possibly biased) audience.

Other early-set highlights include ‘Fearless’, complete with a sample of the Anfield crowd from 1971’s ‘Meddle’ album, and the title track from 1972’s ‘Obscured by Clouds’ soundtrack; this latter track now with an extended intro of state-of-the-art sounds to update its original analogue synth washes.

The band and audience alike are very obviously enjoying themselves which somehow lifts the mood of this often fairly heavy, atmospheric and even melancholic music. Roger Waters’ ‘If’ segues into an edited but still fairly lengthy version of ‘Atom Heart Mother’ and the woman seated in front of us stage-whispers to her partner that she can’t quite believe this is happening. Neither can we to be honest.

There’s a good rapport with the audience. Gary Kemp regales the crowd with stories of his love for Pink Floyd and the times he saw them play live in the early 70s. Guy Pratt amuses with his introduction to ‘The Nile Song’ – “the first Pink Floyd song I ever heard”, informing us that when he suggested it as a contender for inclusion on David Gilmour’s last tour “David suggested I might like to join another band. And now I have!” During the song he cheekily incorporates a line from the Sex Pistols’ ‘Holidays in the Sun’ – a joke that flies straight over the heads of many of the assembled prog and psych fans here tonight.

Later, he recalls the last time Pink Floyd played in this city 30 years ago at the height of ‘Madchester’ and asks if any of the crowd were in attendance then. Of course there’s a big cheer, including from this writer, whose 15 year old mind was truly blown by it.

The relaxed looseness of the performance suits these songs well. ‘See Emily Play’ gets a big cheer of recognition and is followed by a chaotic yet flawless performance of ‘Bike’. ‘Green is the Colour’ replaces Gilmour’s scat-sung vocal and guitar solo (a precursor to his better-known effort on ‘Wish You Were Here’) with a dreamy solo from Gary Kemp.

Perhaps it was rehearsed this way, but when Kemp appears to miss a vocal cue on the same song, Guy Pratt seizes his chance to throw in an improvised bass solo to great effect. It’s moments like these that make for memorable gigs, not the (at times) robotic performances of Mason’s fellow ex-Floyds.

By the time the band reach the more familiar ‘Set the Controls for the Heart of the Sun’ and ‘One of These Days’, any of the few remaining doubters (perhaps hoping for a more well-known set-list) have been completely won over. A visibly moved Nick Mason tells us he’s having more fun than at almost any other time in his musical career. The band leave the stage, soon to return for a lengthy and adventurous encore of ‘Saucerful of Secrets’ and ‘Point me at the Sky’ and that’s it – a triumph!

MANCHESTER APOLLO. GREAT FUCKING SHOW, 3RD ROW, ERE WE GO!
So good to see those songs be done so well again. We even got "FEARLESS". Gig of… https://t.co/DFEE6RHQl3

Even as a life-long Pink Floyd fan, this was much better than expected. Despite the music-snobs’ predictable moans, Gary Kemp proved himself to be more than equal to these classic songs and an inspired choice, as were the rest of the band. Mason and co play a few more UK dates next April and May. If you’re a Pink Floyd fan who missed out on a ticket, then commit high treason to get one next time around.