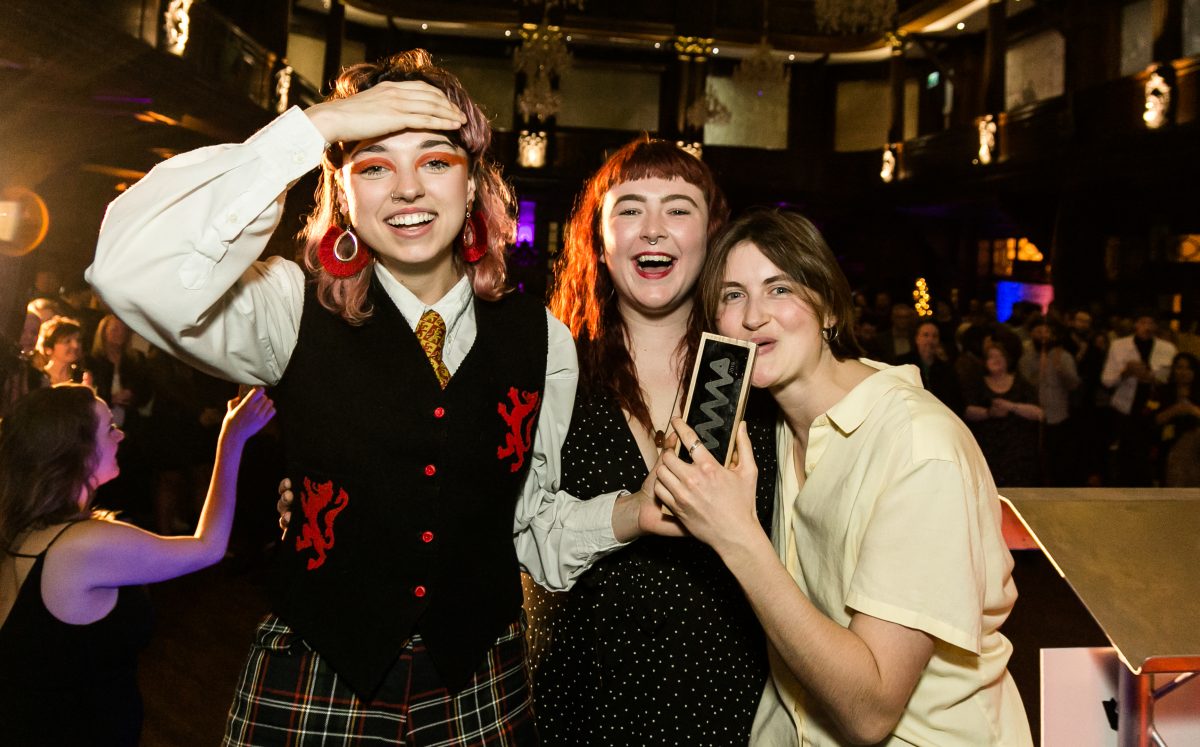 The ninth Welsh Music Prize was handed to Adwaith at a ceremony at the Exchange Hotel in Cardiff tonight.

It reflects the more alternative side of Welsh music, one which finds itself in rude health.

Adwaith‘s Melyn was chosen from a shortlist of twelve albums released between 1 Aug 2018 and 31 July 2019.

Adwaith made massive waves this year, taking their Welsh language album about experiences as young women today with a strong feminist message far and wide in the last eighteen months.

The post-punk feminist trio delivered an inspirational performance at YES in Manchester in early October, played a 6 Music session early in 2019, took a FOCUS Wales trip to Canada’s M For Montreal this last weekend, had James Dean Bradfield offer to remix Gartref from Meyln and supported Gwenno, The Joy Formidable, Gruff Rhys and more.

This week sees Melyn released on CD format for the first time, the vinyl edition selling out a couple of weeks after release last December.

Melyn is released on Welsh label Libertino. The shortlist sees local and independent labels and artists themselves doing most of the heavy lifting release-wise this year, showing the strength and vitality of the grassroots industry.

This is truly a golden age of Welsh music, with a steady heady flow of new and emerging artists from the country on smaller labels alongside more the more established keeping their end up, refusing to rest on past glories.

Previous winners and nominees including Boy Azooga, Gwenno, and Gruff Rhys have gone to achieve wider and continued recognition due the impact of winning the prize.

Last year's winner @boy_azooga takes to the stage to play a special solo set! They're currently touring with @liamgallagher so we're so glad Davey was able to join us tonight! pic.twitter.com/gH8MavVmYX

Boy Azooga took home the gong in 2018 for debut album 1, 2 Kung Fu!. They’ve seen their star rise with sold out UK gigs,  supporting Neil Young on a number of European shows over this summer by personal invitation.

Tuesday had Boy Azooga support Liam Gallagher, who recently named them his favourite new band, on the first of three stadium dates.

‘It was really flattering to have our record be recognised amongst such other great music. I think the prize helped get our name out there more,’ Davey Newington who performed at tonight’s ceremony, told us this morning.

The prize carries on its tradition of supporting fresh talent, with a late afternoon mixer featuring performances from new artists.

In 2018 Adwaith, HMS Morris and Buzzard Buzzard Buzzard showcased, with Los Blancos, Hana2k and Rosehip Teahouse performing this year and chosen as recipients for the inaugural Triskell Award for emerging artists.

The night saw the Welsh Music Inspiration Award 2019 awarded to Meredydd Evans, who would have celebrated his centenary this year, and Phyllis Kinney for their dedication to Welsh music. The pair published several books together, and took their knowledge of traditional Welsh music global.