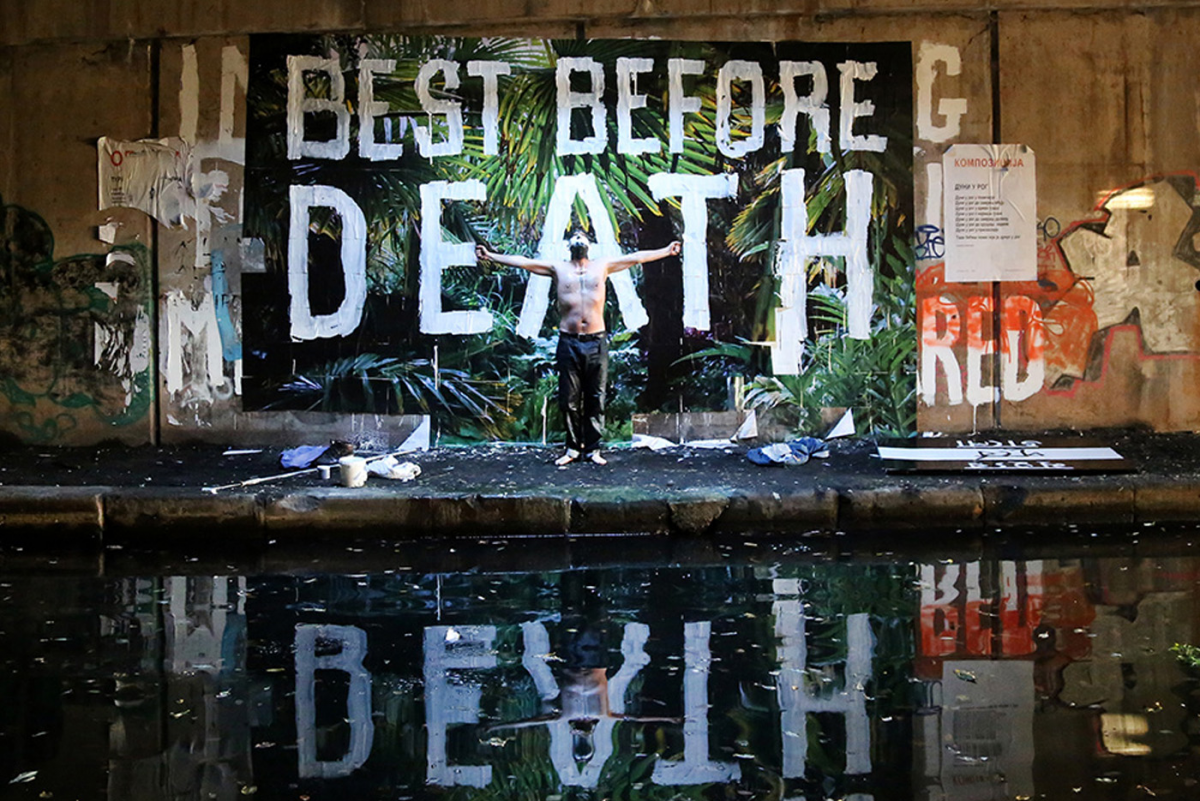 Director Paul Duane chats to Getintothis’ Gary Aster about his new documentary film, Best Before Death, and its subject, the artist Bill Drummond.

Bill Drummond is nearing the midway point of a 12-year world tour in which he establishes himself at a different international location for several weeks and there practices his art, variously (and perhaps misleadingly) described as ‘conceptual’, ‘process’ or ‘performance’ art.

Drummond best known to people as a member of The KLF and The Justified Ancients of Mu Mu, who this week (Saturday 23 November) will part take in the now annual Toxteth Day of the Dead, which will include the ceremonial laying of foundation bricks for the People’s Pyramid as well as host of other events taking place at The Florrie. It’s just one of the many projects that Drummond has worked on in Liverpool over the last 40 years.

The world tour Drummond is currently on is made of stops which have some connection with his personal biography. It is due to finish in 2025 and Drummond (with perhaps a hint of irony) expects to die the following year, hence the film’s title.

Director Paul Duane and his crew followed the artist on two legs of this tour in recent years – to Kolkata in India and Lexington in the US.

The resulting feature-length documentary is, I think, the most successful attempt to capture on film exactly what it is that Bill Drummond does, despite it all remaining entirely unclear what that might be.

The film’s success is surely due, at least in part, to director Paul Duane’s long-term familiarity with, and appreciation of, Drummond’s work.

I asked when he first became aware of the subject of his film.

Paul Duane: ‘’From reading the NME in the early ‘80s… and I bought a copy of The Man [Drummond’s one solo album of 1986]. But it was more reading 45 really, when it first came out. That was a real touchstone for me.

The essay To The Shores of Lake Placid, which I re-read recently, is an absolutely beautiful piece of writing about a very odd life experience. It’s about finding yourself managing a band and realizing that you aren’t really a band manager and you’re actually an artist. I think that’s where his work really made an impression on me, in 45.”

The Timelords Doctorin the Tardis 30 years on

It’s clear Best Before Death has been made with Drummond’s explicit co-operation. In one brief but significant scene we see Drummond first confirming with the film crew whether a location he has chosen is also suitable for them before he proceeds, and we hear some the terms of the “Faustian pact” between the artist and the director being negotiated early in the film.

Drummond is quick to alert viewers to any moments which have been set-up for the benefit of the camera. I’m curious to know about some of the practicalities of working with such a driven and idiosyncratic artist like Bill Drummond. 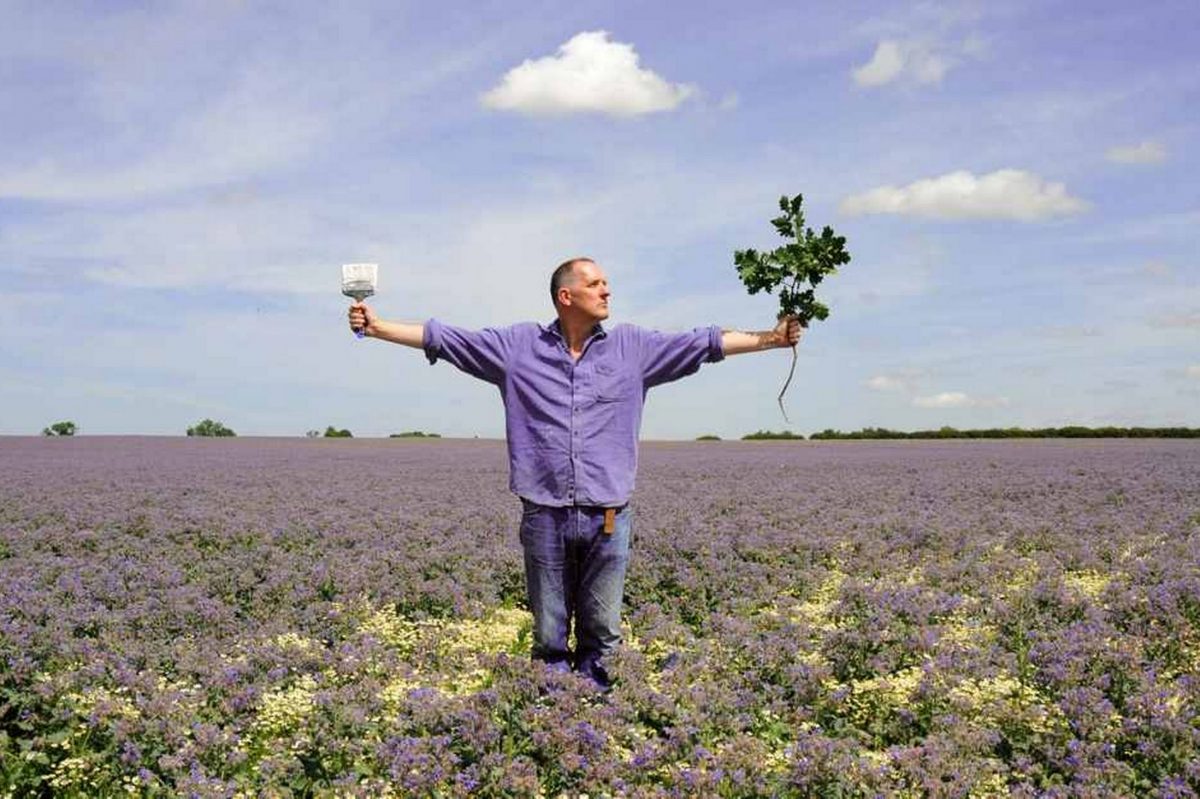 Paul Duane: “It was very much about not filming all the time. I decided to take the risk of just limiting the film to the events of the world tour.

So we started filming in Birmingham, Spaghetti Junction, the day before we went to Kolkata, and we filmed in Kolkata…and then we didn’t really film much again until we filmed the two weeks in Lexington, North Carolina.

So it was quite a modest amount of filming for a feature documentary, which often can go on for about a year or two of filming. But I didn’t really know what the film was going to be until myself and the editors sat down and watched all the footage together and we began to figure out what the structure of the film would be. It’s very difficult.”

Difficult indeed. Because for decades now, Drummond has been consistently either unwilling or unable (or some combination of the two) to explain his work.

And this is something of a recurrent theme of the film, showing us successive encounters between Drummond and various passers-by who are baffled by what he’s doing and, not unreasonably, want to know why he’s doing it, only to discover that he himself doesn’t seem to know either.

As Duane points out, “If the film tried to explain the work, it would damage it, which I think is an idea that some people have difficulty getting, but it’s very important to know that.”

This inexplicable, mysterious quality to Drummond’s work does not easily lend itself to traditional documentary film structures. It allows for no moment of discovery or enlightenment.

It sounds like a criticism of the film (but it isn’t) to say, truthfully, that most are probably none the wiser about the meaning or motives behind Drummond’s work after watching it, than they were beforehand.

But that is not to say that audiences learn nothing from this film. It generously sheds new light both on Drummond himself, and on some of the lesser-known, aspects of his work – baking and unexpectedly distributing cakes; making a bed with locally sourced materials; shining shoes.

Another strength of the film is that it largely refuses to delve into the more infamous moments of Drummond’s multi-faceted career, and leaves the most notorious moment of all entirely unmentioned.

Paul Duane: “I was pretty clear that I wasn’t going to do the backstory of The KLF, and that makes it easier for him I think, because he’s suspicious of any approach that seeks to conflate his work as a member of The KLF and The Justified Ancients of Mu Mu with his work as Bill Drummond, and rightly so.”

In one memorable scene when Drummond is pressed on this chequered past by a young man driving him around Lexington, his reluctance to talk about it is both amusing and frustrating for the audience, yet also revealing in its own way.

Elsewhere when the artist and photographer Tracey Moberly, who is accompanying Drummond on this world tour, discovers the inherited family Bible that Drummond takes everywhere with him, his monosyllabic answers when she presses him about it are also paradoxically illuminating.

Drummond’s work at these much smaller, specific and local scales is no less fascinating to watch and to ponder on than the more attention-grabbing things he’s done in the past, and the film captures many of these moments beautifully.

In journalistic parlance one might say Drummond gives good copy. He’s eminently watchable as an apparently anonymous man in late middle-age climbing a tree or banging a drum.

Though I suspect he might not appreciate the observation, on watching the film one can readily see why he was once invited to take part in Celebrity Big Brother. He declined, of course.

Drummond’s art does not fit neatly into any previously defined ‘school’, ‘movement’ or other category. It blurs the boundaries between art and non-art, challenges our expectations of what art can be, where it is to be found and what it consists of.

At times, Drummond seems to be making art that is about art, or perhaps more precisely about our relationship with art. By making art which involves an object with a simple practical function, such as a bed, he encourages us to consider the very definition of art and its utility. 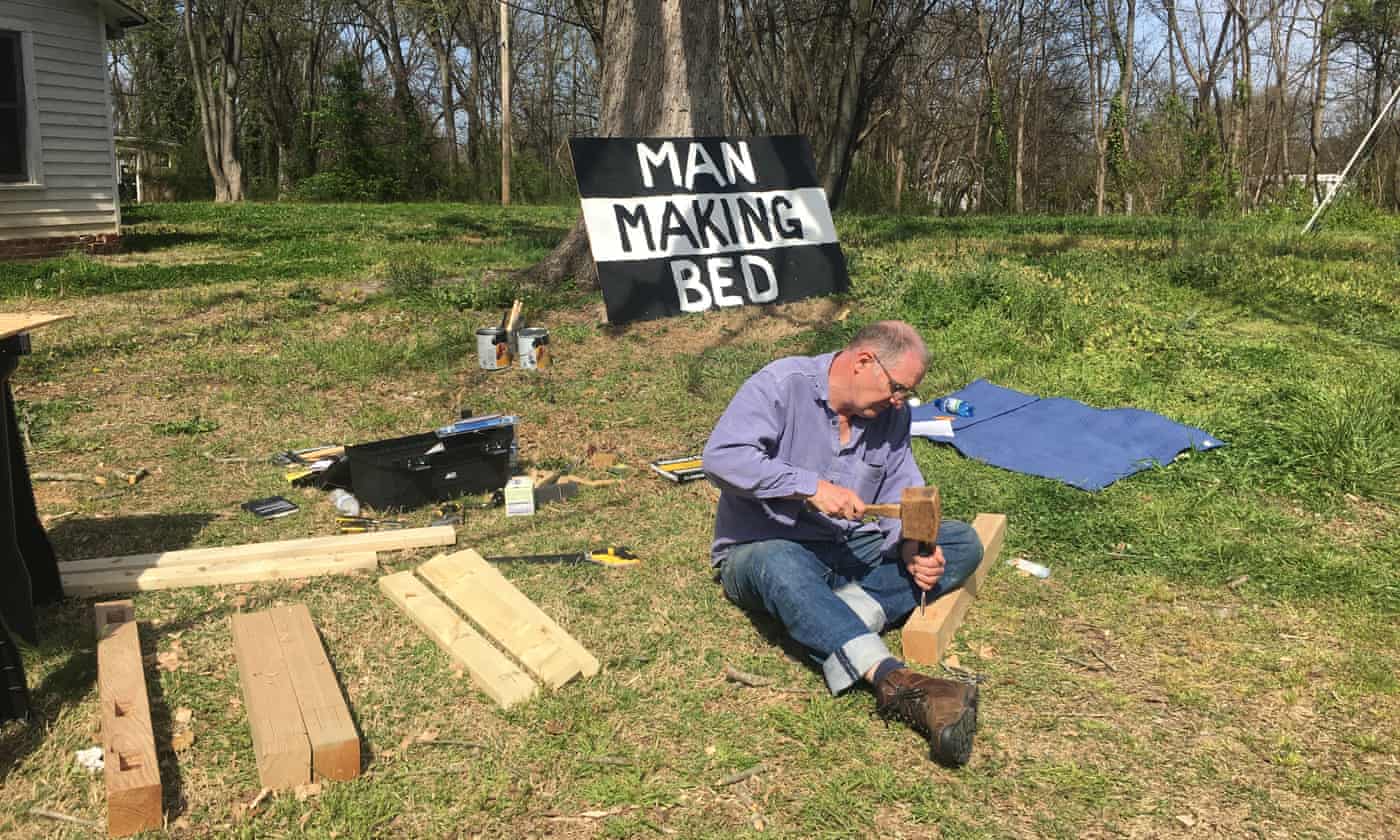 Despite such weighty concerns, the film is frequently humorous and includes several very funny moments. I wonder if Duane thinks that this might undermine the seriousness of Drummond’s work.

Paul Duane: “Not at all, I think it’s a way in for people.

The humour comes from the fact that Bill doesn’t take himself too seriously. I mean, he takes the work seriously, but he’s not a self-serious person and from the opening minutes of the film…it allows people watching this to say to themselves ‘ok, he’s doing something that he’s serious about, but we’re also allowed to laugh at it’ and I think that makes the audience feel safer watching it.

They don’t feel the need to sit there and frown and scratch their heads in serious concentration. It helps people to understand that it will be an entertaining journey, even if they come out the other end none the wiser.

Bill’s lack of an ego is a real asset here because there are lots of artists who’d be very careful about the way they’re presented in a film like this, and their image and so forth, but with Bill you don’t have to worry about any of that.”

Toxteth Day of the Dead; The KLF and what we learned about Mumufication

Indeed. One of the things that struck me about Best Before Death was the fact that, although I’m very familiar with Drummond’s work, particularly his writing, the film genuinely reveals certain sides to his character that were previously unfamiliar.

It’s also rather more revealing of Drummond in a literal sense.

Paul Duane: “[Laughs] Yes, that was Bill’s idea and wasn’t my suggestion.

I think it’s ironic that Bill’s perfectly happy to be physically naked in front of the camera, but in terms of his openness on a personal level, like the scene with Tracey (Moberly) asking him about his father’s Bible, and he’s just not going to get into any of that sentimentality. It’s just not where he wants to go at all.”

Much of the contemporary art establishment, at least here in the UK, does tend to ignore or dismiss Drummond. Why do you think that is, and do you think your film could further validate his work at all?

Paul Duane: “Well, I was very pleased during the first year of the world tour (2014) that the Guardian’s art critic made Bill’s stay at Eastside Projects in Birmingham one of the top ten art events of that year.

Internationally he’s done stuff at Biennales at Beijing and various other places, so he does get invited to places like that, although he doesn’t publicize it necessarily, and maybe he feels that in some way it takes away from what he’s doing.

Anybody who knows Bill’s work knows that there’s a sort of perversity to it in the sense of ‘I don’t really want to be part of the gang that wants to have me as a member’. I think that being accepted by the art world, although it would make his life easier in some ways, is not necessarily his goal.

He has been, to a degree, taken in and offered work but he doesn’t always accept that, and it may be that he would prefer to be on the outside.”

And that would be my guess too. I dislike the phrase ‘outsider artist’ because as often as not, those using it tend merely to mean ‘not-a-proper-artist’, but leaving aside that connotation, perhaps it is a better fit than some of the other art-speak terminology that has been applied to Drummond’s work.

One thing that comes across very clearly in Paul Duane’s film is that Bill Drummond is absolutely committed to what he’s doing, is completely sincere about it, and will occasionally go to quite extraordinary lengths in order to remain true to his own unique trail, wherever it leads.

This is a funny, intriguing and strangely moving film which authentically documents a singular and visionary contemporary artist. Look out for it.