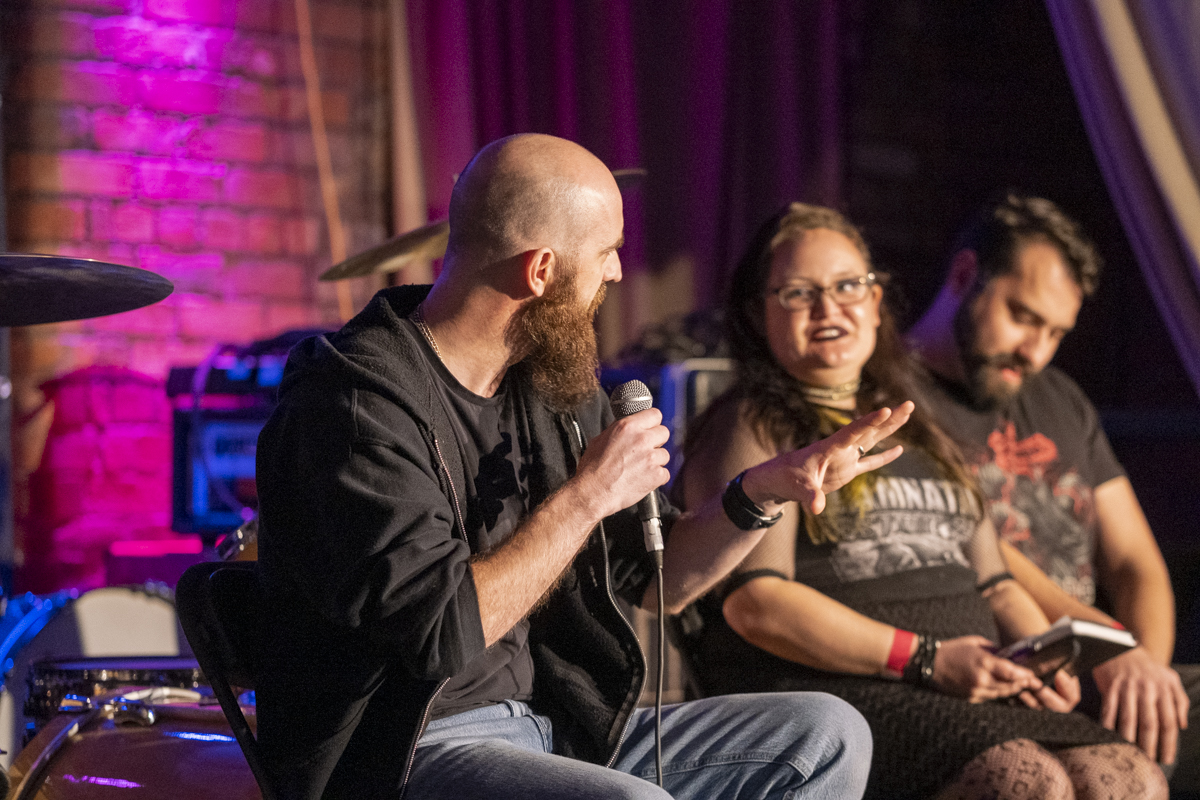 The first ever Liverpool metal music conference took place at Phase One this week and Getintothis‘ Ned Hassan reflects upon its significance.

The inaugural Liverpool metal music conference constituted the first step in attempting to bring different stakeholders in the Merseyside metal community together.

Hosted by Getintothis, Deathwave Entertainment and Phase One prior to the stunning A Pale Horse Named Death concert, the event saw a fascinating discussion of the current state of the music and its culture within the region.

On the basis of numbers alone, the conference must be judged a success.

After all, it was standing room only by the time Chair Mark Cooper called a start to the evening’s proceedings.

Yet this was so much more than a mere gathering of like-minded people; it felt like the genuine start of a dialogue amongst groups who have often felt marginal to what is ostensibly a ‘city of music’.

A meticulous and fair host, Cooper, who was live recording the discussion for his Spoken Metal Podcast series, ensured that each panel member had their say on key contemporary issues effecting those involved with metal music in Liverpool.

Whether they were fans, musicians, involved with music industry or simply interested onlookers, several aspects of the discussion were highly engaging for the audience.

The topic of the metal community and how it is represented within the city was first on the agenda and long-time promoter and passionate metal enthusiast JJ Haggar got straight to the point with his assertion that Liverpool “always has and always will” have a metal music community. 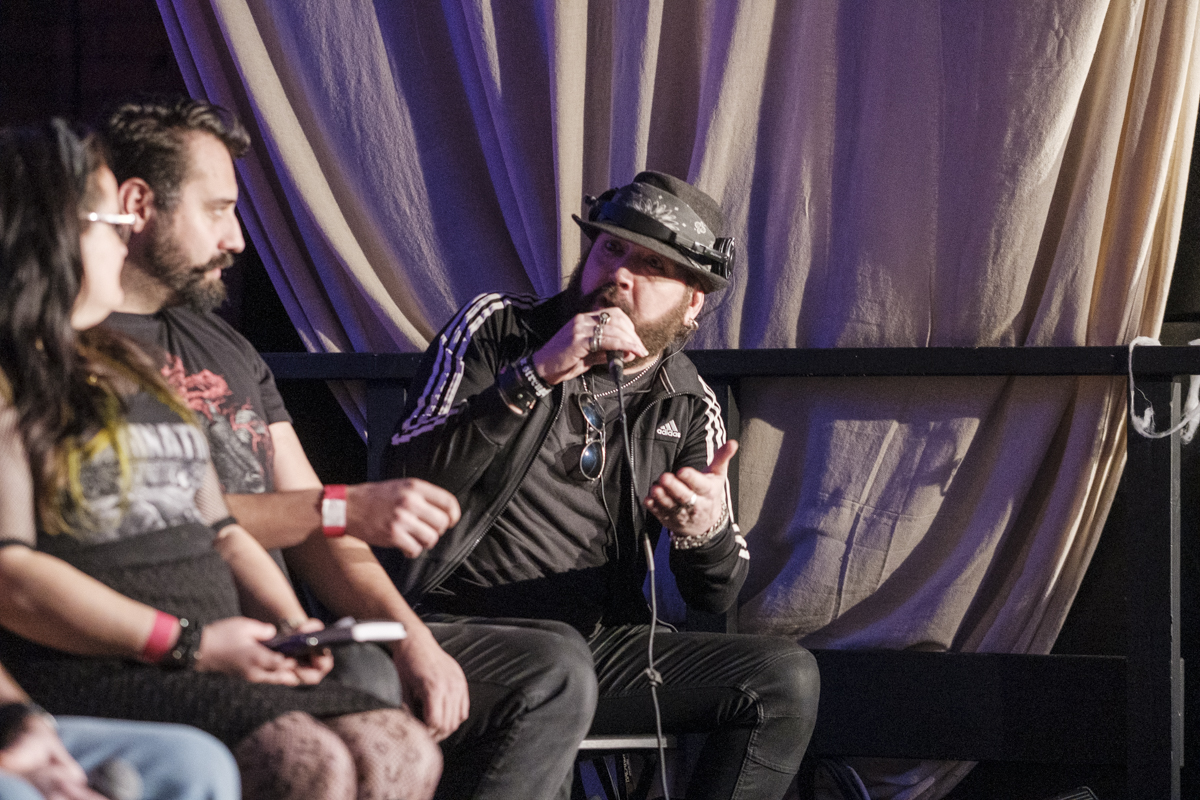 Panel members then began to consider the nature of that community in more depth, with Haggar identifying that from his perspective the difference between the community in the past and the one in the present is that whereas it used to be “us against them [the mainstream]” it now feels like “us against us.”

This raised the issue of elitism within the local metal community and whether, when it comes to people’s genre affiliations, there is sometimes too much snobbery.

Nedim Hassan, a Senior Lecturer at Liverpool John Moores University who is currently conducting research into Merseyside’s metal scenes (and someone known to readers of these pages as Getintothis’ regular metal columnist), elaborated on this issue.

Hassan proceeded to unpick the idea of ‘community’ in metal and outlined how Liverpool has several overlapping metal scenes that do not necessarily always converge.

Dysgeusia: Getintothis’ monthly round up of all things metal

An appreciation of this complexity was, therefore, considered vital and this was something that Amanda Barnett developed further in her discussion of elitism.

Barnett, who is conducting research on student rock societies in the UK for a PhD project at the University of Liverpool, took a broader stance on this issue, highlighting research that has illustrated how historically women, people of colour and those from the LGBTQ community have often been marginalized within the metal music subculture.

This, Barnett continued, is something that has gradually been recognised within metal communities and she spoke about her largely positive experiences within the Liverpool metal community in comparison to some of those she encountered back in her native USA.

Joe Maryanji, a local venue manager and vocalist from Liverpool-based metal band Oceanis, also made some insightful points about elitism and the changing nature of the city’s metal community.

He spoke eloquently about the loss of the much-missed Quiggins Shopping Centre, which had become a “hub” for youths interested in metal and alternative culture.

Such a hub, Maryanji suggested, had perhaps fostered more tolerance for a multitude of sub-genres as well as for events that featured mixed bills.

Whereas presently, the implication was that perhaps affiliation towards distinctive sub-genres such as black or death metal could sometimes lead to conservatism and an unwillingness to step outside one’s preferred genre circles. 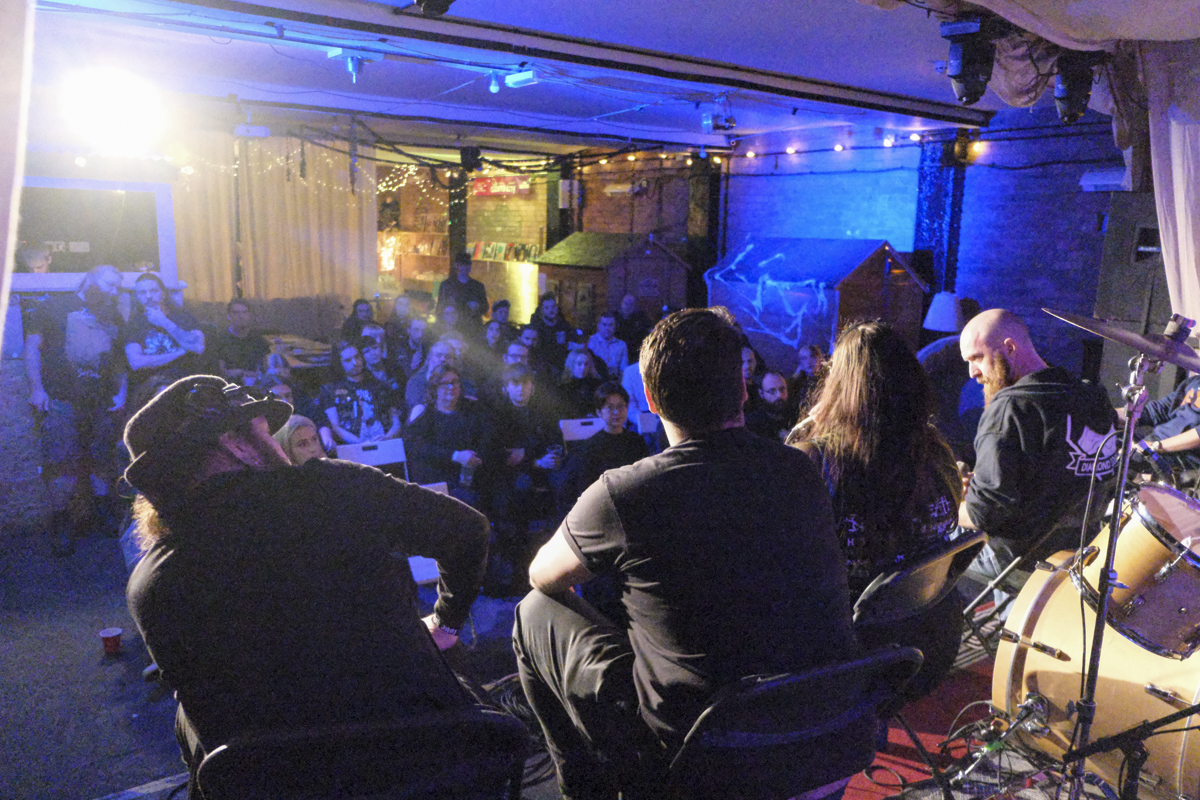 He reminded everyone that debates about music communities and how to support them have to be connected with the broader socio-political context of austerity, both on a local and national level.

While the arts and culture are frequently a distant afterthought for city councils dealing with shrinking budgets, Guy advocated measures to advance the profile of metal music amongst Liverpool’s higher profile cultural institutions.

Superb turn out for first #Liverpool Metal Conference, plenty to think about, great to have many bands in the room. Thanks to Amanda, Ned, JJ, Joe, Coop & Deathwave's Andy for teaming up with @GetintothisHQ for this special happening. This is just the start. @APHND up next! 🤘 pic.twitter.com/RDb7ABYFNe

Lively debates about the virtues of this approach (versus a more traditional DIY position) ensued before the panel responded to points from the audience.

These helped to usefully expand on some of the issues broached earlier, with one audience member emphasizing the importance of ensuring that metal’s sub-genre cultures are not too inward looking.

While wider society may “never understand” the significance of metal music cultures, particularly at the more extreme end of the scale, the challenge was laid down for those who care about the music’s future to at least attempt to demonstrate its value.

Ultimately, this ground-breaking event inevitably raised more questions than it answered, but it also began the precious first steps in enabling such challenges to be met.