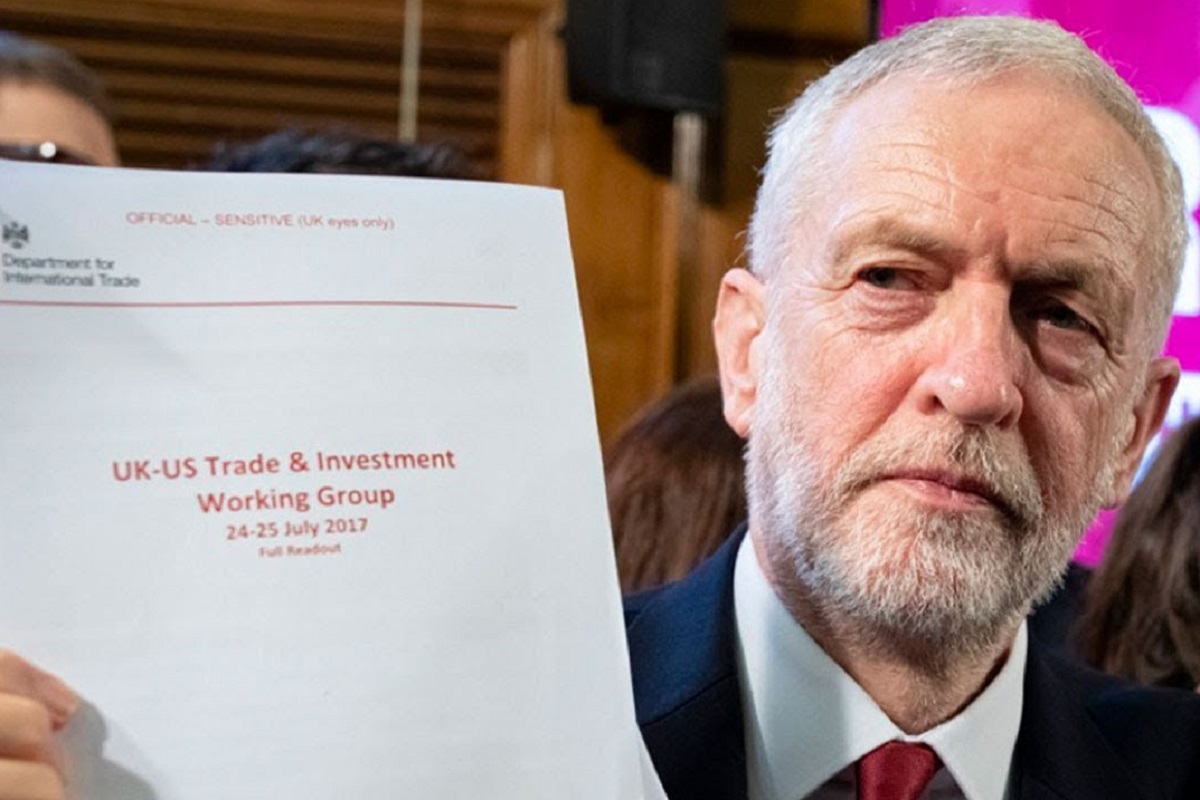 In his latest piece on the General Election Getintothis’ Jono Podmore outlines the Tory plans to sell the UK down the river.

Last Wednesday morning’s Labour party press conference should be the turning point in this election campaign.

The 451 unredacted pages that Corbyn brandished describing in detail the 6 meetings between government and US trade negotiators cast the most damning light imaginable on this Tory government and its motivations.

The revelations are being presented in the light of what has become the primary battleground in this election: the future or otherwise of the NHS. That in itself is a major coup for Labour – remember this was supposed to be an election entirely framed by Brexit?

And yet there’s much more. It’s now harrowingly clear that all our worst nightmares about the government and its motivations are true, and the NHS is just part of the story.

The discussions reveal the UK in such a sad and weak position without the weight of with the other 27 nations in the EU with us, that the US negotiators can make demands for market access on a level never even dreamt of before.

This is why the vicious group of right-wing maniacs in the Tories have pushed so relentlessly and mendaciously for Brexit. The goal of this catastrophic nonsense is to make the UK a playground for American interests that Tory financial interests can profit from in the short term and shamelessly ignore the consequences for the rest of us.

This is no longer left-wing polemic. It’s there in black and white.

Here are a few examples that caught my eye.

Food. The chlorinated chicken is just the beginning. Melton Mowbray pies, Scottish Salmon and Cornish pasties are considered restrictive terms to the US negotiators, which means they could be manufactured in the US to shocking low, obesity-inducing standards yet labelled the same.

As the effects of climate change become ever more present and it’s now beyond doubt that if we don’t act now the four horsemen of the apocalypse will be racing across England’s green and pleasant land in a matter of a few short years, the plucky UK negotiators asked their American counterparts to at least mention the Paris Agreement in the discussions. This was the response:

US trade negotiators “are bound by Congress not to include mention of greenhouse gas emission reductions in trade agreements. US stated this ban would not be lifted anytime soon.”

– and your government lapped it up. People who represent you and negotiate on your behalf simply kow-towed to this demand. For them and their shareholders the greatest risk to civilisation and life on the planet simply doesn’t exist.

There’s more. I found this extract particularly chilling:  “being able to point to advanced negotiations with the UK was viewed as having political advantages for the President going in to the 2020 elections.”

The UK government are willingly participating in a project designed to have partisan political impact in the US. You pay their wages and they are actively working to get that orange, racist buffoon, the front man of a new international fascist order, re-elected.

While you are letting that sink in, there’s this: “The US repeatedly emphasised their view that the UK should seek regulatory autonomy following EU Exit to allow us to evaluate methods/products independently.”

And there’s more..“Chequers and the UK’s decision to attempt to align with the EU on Agri-food and SPS is the “worst-case scenario” for a UK-US FTA.”

There we have it.

The US seeks to steer the UK out of the EU. Brexit has been a put-up job by US corporate concerns (represented here by their government negotiators) to facilitate full market access and nothing less.

All the John Bull English nationalist horse shit since 2016 was nothing more than a sham to allow the UK to be completely and utterly over-run by US concerns, with all that brings.

Hideously low-standards in food, climate change denial at the centre of government policy, a bonfire of workers rights and the end of the NHS.

Over the last 5 years under this government, £15 billion worth of NHS contracts have been farmed out to the private sector.

This means the priority for over 7% of UK healthcare is no longer your health, but the size of the dividend for shareholders.  These documents reveal that the US are already working to make sure that number increases to 100% and that the shareholders will be Americans:  “We have reached a point (for Patents in Pharmaceuticals/Health) where … we are awaiting the clearance to negotiate and exchange text to really take significant further steps.”

Jeremy Corbyn confronted Johnson with the facts of these negotiations on national TV last weekend.

This is Johnson‘s reply:

Despite the horror of our food, our health, our national identity and our hard won rights being sold out to a Republican US administration, perhaps the one thing that you should bear in mind when you vote on December 12th is that the Tory PM, in full knowledge of the facts, lied in the most unimaginably bare-faced and knowing way to the entire nation.

He did that in order to protect Donald Trump, American shareholders and his own sorry, white, privileged arse.

The cost of having this man in power any longer is to have the UK reduced to a slave state of the US while having a clown lie in your face about it daily.

– and we have it in Black and White.