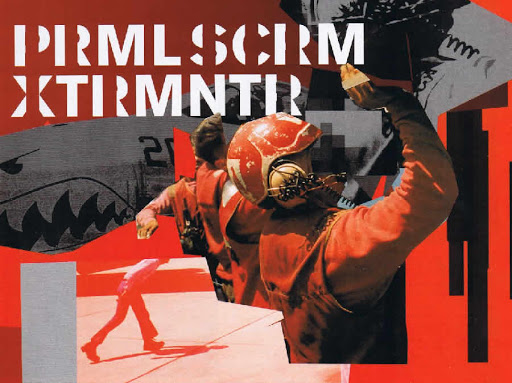 With Primal Scream’s XTRMNTR album hitting it’s 20th Anniversary, Getintothis’ Rogerio Simoes looks back at an album that captured a worrying vibe of the future.

You were probably too young, not even born or may have forgotten, but the 21st century started with a general feeling of elation.

The evil 20th century was behind us, and the road ahead was paved with gold. New Labour, London Eye, the EU, democracy spreading, poverty retreating, park life, it was all good, and nobody looked back in anger. The end of history.

Bobby Gillespie knew better. Much better. On January the 31st, 2000 – technically still within the century that brought us Adolf Hitler, Josef Stalin, Richard Nixon, Margaret Thatcher and the atomic bomb, but already in the noughties –, Primal Scream released XTRMNTR, a maverick of an album that saw what most of us could not.

The record had an apocalyptic tone: not only was the world still full of pretty bad stuff, but things could get worse. As we now know, they did, just as XTRMNTR told us so.

Only Primal Scream could have seen it. Overtly political bands such as Manic Street Preachers, Rage Against the Machine and Levellers were too much into their own politics to see much ahead. It took the Scream’s visionary goggles to spot the swastika eyes lurking behind us.

Having started out in the 1980s, promoted hedonism in the early 1990s and changed their path more than once, Primal Scream knew that things do change, and the world might not be what it seems.

While we were partying, they were ready for war.

It all started a couple of months earlier, in November 1999, when Swastika Eyes was released as the first single of their coming album. The punch thrown by the electropunk song indicated that the Scottish troupe were onto something special. “I see your autosuggestion psychology / Elimination policy / A military industrial / Illusion of democracy.”

We were like, “Hold on a minute… We only have good wars nowadays, don’t we? And our democracy is for real, isn’t it?” Back then it was not clear how much Gillespie’s words would resonate with the future of the world.

The sound was different too. Primal Scream were associated with psychedelia, guitar based rock & roll and the dub-dance hippie spirit of Screamadelica. Swastika Eyes was fast and aggressive electronic music.

For a band coming from the trippy sounds of Vanishing Point, which was even reworked as a dub record on Echo Deck, the move was a welcome surprise. Apart from being a politically charged track, it felt like a new musical statement, another big change in their sound.

After Swastika Eyes, expectations were huge, with many wondering if a new mammoth of an album was on the cards, perhaps on the impact levels of Screamadelica. Yes, it was. When XTRMNTR reached British shops and ears – Americans would have to wait until May –, it felt like a bomb was being dropped in Central London.

From the cover with the image of a military jet pilot preparing to fly to the metallic noises of Shoot Speed / Kill Light, the record is all about supersonic destruction met with hypersonic resistance, and the result is a massive blast.

At the time, it was clear that the band, and Bobby Gillespie in particular, were desperate to scream about things, to let it all out. They were angry, furious with the state of the music and the world, and wanted everybody to know about it.

“Pop music is dead right now“, said Gillespie in an interview with The Daily Telegraph – of all newspapers – in March 2000. “There’s nobody who’s got anything to say. You’ve got to understand that a lot of bands are Thatcher’s children. They grew up completely depoliticised.”

Back then he also spoke about how punk came back with a vengeance on him, having been at the heart of his early musical education. Gillespie felt the world needed the punk energy back, and that’s what they gave us in the hour-long landmark album.

It’s an interesting experience to try and remember the first time we heard Kill All Hippies. The opening track starts with the sound of a ring, then a factory bang and scary sound effects, followed by a timid guitar riff. “Hello, this is gorgeous, anybody out there read me?”, says the voice of Linda Manz’s character in Out of the Blue, Dennis Hopper’s 1980 cult film. “Destroy, and kill all hippies.”

For almost a whole minute the listener is prepared for something to happen, and even today, having heard that track a zillion times, we can still feel the tension that intro creates. Then, at 50 seconds in, comes the terrifyingly cool mixture of synth and guitar, the drums arrive just after the minute mark, the sound keeps growing, and then, in comes Mani.

XTRMNTR was the first time the then former Stone Roses bassist played on a whole Primal Scream album, having appeared only in parts of Vanishing Point (1997). His terrific, scuzzed up bassline in Kill All Hippies is a perfect spice of heaviness and attitude, marking one of the best openings of any album ever.

At the same time, Gillespie’s words of individual freedom stay in our heads: “You got the money, I got the soul / Can’t be bought, can’t be owned”.

There’s almost no separation between tracks 1 and 2, with Linda Manz’s “This is gorgeous, signing off” immediately leading to the visceral noisy guitars of Accelerator. “Come on, come on / Hit the accelerator, the accelerator”, and that’s what they do, piercing our brains with a fast three-chord sonic weapon and sending us “into the future, into the future”.

The sheer power of the song was even more clear when they played it live on national television at BBC’s Jools Holland, with the three guitars formation – Andrew Innis and Robert Young, plus My Bloody Valentine’s Kevin Shields – that became a classic.

Together, those three guitars provided an incredible live experience that lasted until the whole of the Evit Heat days. They became one of the most brutal acts to watch on stage, always opening their shows with Accelerator, giving audiences their own style of shock and awe treatment – the Japan-only album Live in Japan immortalised that phase.

So Primal Scream were louder and more powerful than they’d ever been, and that meant they could no longer make us groove, right? Wrong. In some ways, Exterminator is XTMNTR’s best track, as it combines musical aggression, political lucidity and a funky riff.

“So look out, kid / They keep it all hid / You think you’re free, but you ain’t free, just free to be hit.” Is there a better description of the toxic logic of today’s algorithm-based internet? Or the extremely competitive gig economy? With the growth of zero-hour contracts, it does feel today that “nobody’s listening” and “everyone’s a prostitute”.

Swastika Eyes comes as track 4, and the listener is left both exhausted and begging for more. Pills is funk in form and punk in spirit, exposing the “truth about you”, which involves “jet plane dive bombs”, then ending with multiple f-words.

Enough of speaking, Gillespie might have thought, as the seven minutes of Blood Money come next, instrumental, like the soundtrack for a 1970s car chasing film, centred on Mani’s bass and Darrin Mooney’s terrific drumming.

A bit of respite is offered by Keep Your Dreams, a slow ballad that maintains the band’s tradition of having soft tunes here and there, but this is not a love song. “Stuck in acid, you will rust / Time will turn your bones to dust.” It’s got some good advice for a dangerous world: “Keep your dreams, don’t sell your soul / Be careful”.

Towards the end, XTRMNTR loses a bit of its creative force, as Inspect Royalty repeats Pills’ formula of funk format and punk spirit. MBV Arkestra is a remixed version of If They Move Kill ‘Em (from Vanishing Point), and the band chose to include in the album the Chemical Brothers’ remix of Swastika Eyes, which doesn’t add much to the whole picture.

The album’s spirit is lifted again with Shoot Speed / Kill Light. This is Primal Scream at their best: Mani’s bassline leads the way, while the whole band produces a catchy beat with a mighty sound, over which Gillespie just sings “Shoot speed / Kill light”.

Those four words somehow summarise the record and put a perfect ending to it.

Twenty years later, we can say that Primal Scream’s superb sixth album, the last by Creation Records, has probably saved pop music from irrelevance. It showed music could still shout about how messed up the world is, it could still make us think and warn us about the enemies surrounding us.

For the band, it was a record to be placed on the top of their achievements, alongside Screamadelica, bringing another massive change of musical direction, the third of that level.

It also marked the end of a decade that spent too much time celebrating victories, and of a century in which good and bad were more like black and white, easier to spot. It did all that without looking back. Instead, it announced the future.

With Bush in the White House, Primal Scream intended to raise the stakes, writing a song called Bomb the Pentagon, whose title and lyrics did not survive after the 9/11 attacks – performed live a few times, the track was renamed, reworked and became Rise, part of Evil Heat.

Then came the conflict in Afghanistan, the invasion of Iraq based on weapons of mass destruction that didn’t exist, the financial crisis, online algorithmic surveillance, political extremism, social tribalism, and the increasing squeeze of the underclass.

The global military-industrial complex became larger than ever, swastika eyes are everywhere, and many feel that democracy is just an illusion. XTRMNTR is here and now.

Time to hit the accelerator again.