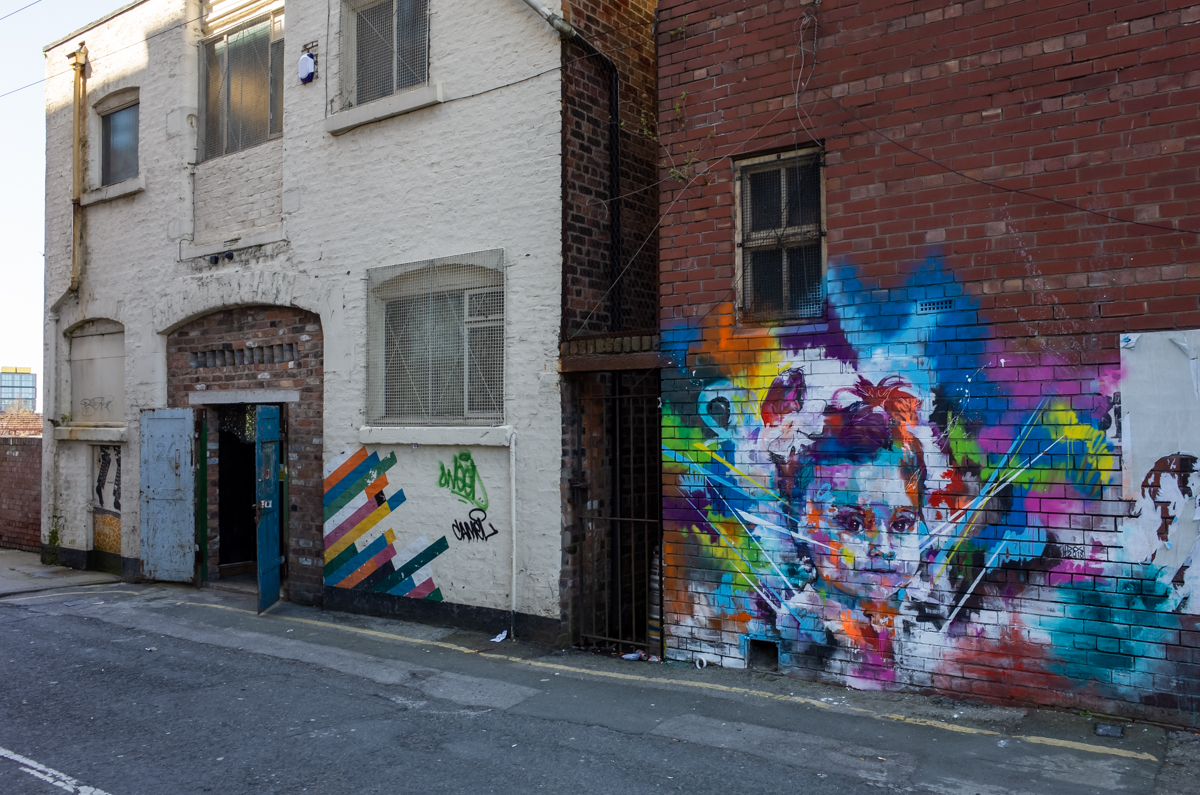 Coronavirus has impacted on Liverpool’s music and arts community with a number of high profile gigs being axed.

24 Kitchen Street announced earlier today that they will be closing temporarily as of March 22 for a month.

In a statement the venue said: “Due to ongoing public health concerns we have decided to shut our doors for one month effective from this Sunday 22nd of March. We are currently working on rescheduling all events for later in the year, stay tuned and stay safe.”

Some of the already postponed events include legendary reggae star Lee ‘Scratch’ Perry, who will now perform on October 17, as well as their 30 Years of Rave event featuring Slipmatt, 2 Bad Mice and DJ Storm which will now take place on October 9.

Tickets already purchased for both events remain valid, and those who can’t make the rescheduled dates will receive refunds at the point of purchase. 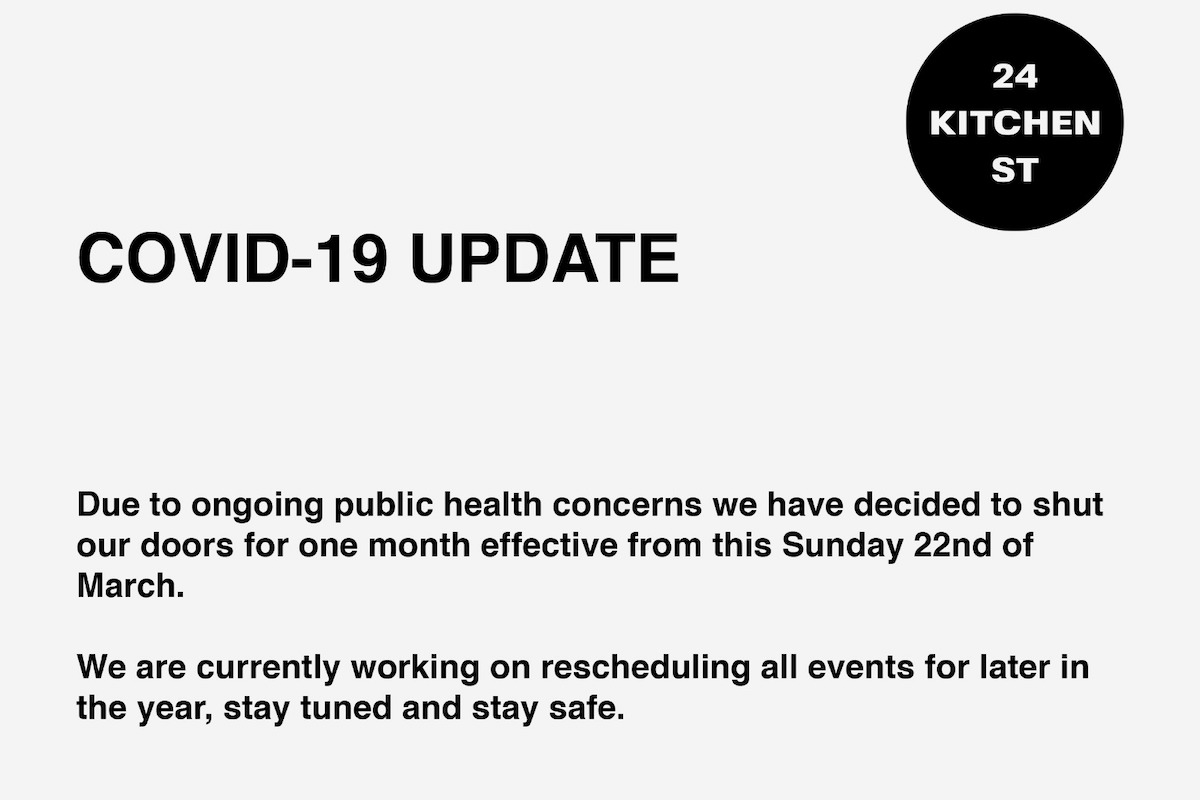 Frank Turner is the latest in in an abundance of high profile gigs that have been forced to either cancel or reschedule due to the health and safety concerns surrounding the coronavirus pandemic.

Originally set to play Liverpool’s Olympia on March 20, Turner released a statement early this afternoon saying that given the current situation, he will be rescheduling his gigs in Norwich, Winchester, Exeter, Liverpool and Nottingham, though no announcement has been made just yet about when these events will take place in the future.

Turner said: “This is a super stressful time for everyone, not least in the live music industry, which is facing nothing short of a catastrophe.

“Looking at shows in the UK, it is with extremely heavy hearts that I must announce that all shows as of are not going ahead – Norwich, Winchester, Exeter, Liverpool and Nottingham. It’s not sustainable for us to continue.

“Further afield, in the last couple of days, both Australia, New Zealand, South Africa and countries in South America have announced mandatory 14-day quarantine periods for new arrivals into the country, travel bans, and / or restrictions of live events. For obvious reasons, this means that my shows there, planned for next month, cannot go ahead.“

Warmduscher have also had to cancel their upcoming sold out gig at Phase One this Saturday March 21.

In an instagram statement , the band said: “Sadly, it’s happened, due to the government’s weak and spineless public address, we have been forced to postpone our upcoming tour and reschedule. We are sorry to all those who bought tickets, information is on the way, we’re still trying to figure things out. Take care of each other, dream wild and often, we will see you soon, love you, miss you. – Warmduscher.”

They also announced that all dates will take place in July, though no further information has been provided just yet.

Caribou has been forced to postpone his UK tour meaning his date at the Invisible Wind Factory due to take place on April 1 will be rearranged.

Dan Snaith, aka Caribou, was set to head to the UK for eight dates, however the entire tour has been cancelled amid fears of the Coronavirus which has caused a global meltdown.

Caribou and Perry are not the only major artists to have to reschedule their dates in Liverpool with The Who revealing they are postponing their UK tour with their scheduled M&S Bank Arena Liverpool date on April 6 axed.

A statement released on their behalf said: “After serious consideration, it is with much regret that The Who have postponed their UK tour, due to start next Monday March 16 in Manchester at the Manchester Arena and finishing at Wembley SSE Arena on April 8.”

With more disruptions expected, shares in concert promoters Live Nation dropped by 16.6% on Wednesday, representing a single-day loss of more than $1.8bn (£1.4bn).

Another band touring the UK, Palace have axed their UK tour amid the Coronavirus fears with their date in April at Liverpool’s Arts Club on March 25 now cancelled. 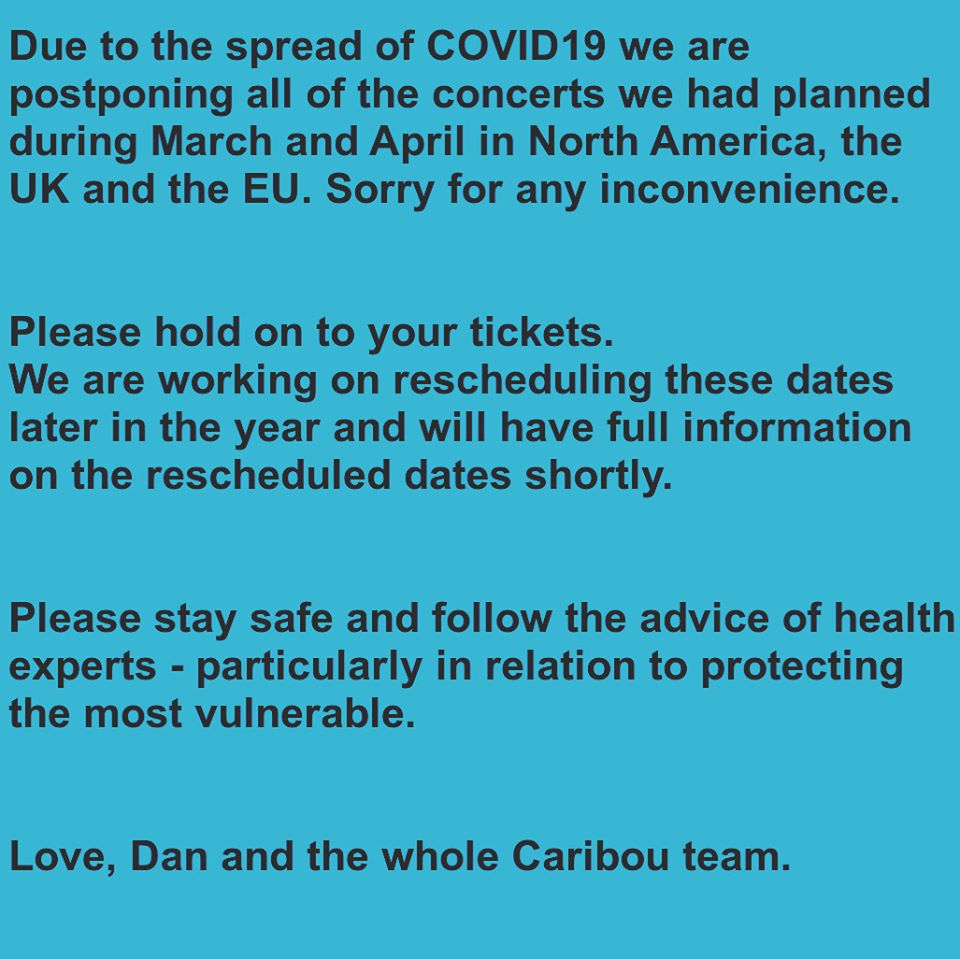 Threshold Festival organisers have also announced that the festival will be postponed until later in the year, following the advice from the government and health care officials.

Though it is unclear when the festival will take place, the organisers have said that it has been postponed until further notice.

It’s with heavy hearts that we are now announcing that we have decided to postpone Threshold Festival 2020 until further notice.

Jamie Callum also announced this morning that he is postponing his UK Taller Tour due to the rising incidents of Covid-19 and directives from from the World Health Organisation.

Callum said: “I’m so disappointed to not be able to bring this show to you, which was over a year in the making, but it is very clear to me that this is the best course of action within the current health crisis. When a big tour is out on the road it takes a lot of moves to bring it suddenly to a halt, particularly with no clear directives from our own government. For now, the breaks are on, and we are working on rescheduling the shows for later in the year, when the universe is in a better place.”

The Snuts were also due to make an appearance hosted by Phase One for an in-store performance and album signing.

In a statement, the band said: “unfortunately we’re forced to postpone our inshore signings until further notice – absolutely gutted, we are being told we have to follow guidelines in limiting travel and meet & greets in the short term. We’re currently looking at new dates and will announce them ASAP.”

Liverpool Football Club stadium announcer George Sephton was due to DJ at the club night but will no longer appear.

Sorry everyone. In light of the Premier League announcement today George will no longer appear tomorrow night. Refunds will be made automatically through Eventbrite ASAP. We are looking to reschedule once things settle.

Earlier in the week, Snarky Puppy‘s Shaun Martin cancelled his UK dates including the massive Parr Jazz date at the Invisible Wind Factory scheduled to take place on March 22.

Other postponements recently announced include the Athe party with Oli X that was supposed to take place at Q U A RR Y next Saturday due to “latest developments around Covid-19 and the potential curfews on events” .

Sløtface have been forced to postpone their entire UK/European tour due to the rapid development of the virus in their home country of Norway, though no information has been released yet on when the postponed events will take place.

Elsewhere at Shipping Forecast, Real Lies have had to cancel their show that was supposed to take place this Wednesday March 18.

And at Studio 2, the Milo Seabird + Campbell L. Sangster + Ben Burke event that was supposed to happen this Thursday March 19 has been postponed.

There’s no confirmed date at the moment, but all tickets will still be valid and refunds can be secured at point of purchase.

Over at 81 Renshaw, multiple gigs have been forced to either cancel, reschedule, or alter the lineup due to safety concerns:

March 19: Peter Case & Sid Griffin – change of lineup
– Peter Case is unable to travel from the USA so has been replaced by Callum Gilligan and Thom Morecroft, Sid Griffin will still appear as promised. This event will still take place on March 19.

March 28: Section 25 IndustrialUnit – rescheduled
– Legendary Factory Records outfit Section 25 have been forced to reschedule their March event due to safety concerns, this event will now take place on October 24. Tickets purchased are still valid for the rescheduled gig.

April 25: The Burning Hell – cancelled
– Canadian duo The Burning Hell are unable to travel and have had to cancel all European tour dates. 81 Renshaw has not been able to reschedule this event at this time.

In a statement, the venue said: “That’s all we know about for now, assume that all gigs not mentioned are unaffected, we will obviously keep you as up to date as possible as the situation develops. Thanks for your patience.”

81 Renshaw have also stated they will not be making any more bookings at this time until things settle down.

Meanwhile, over at Kazimier Stockroom, Bonnacons of Doom and Pale Rider have been forced to cancel their Ostara event that was supposed to take place on March 19.

Though there is no confirmed reschedule date just yet, Bonnacons of Doom announced in a statement that they are planning to reschedule, and tickets can be refunded by Skiddle.

Glastonbury Festival 2020 will go ahead despite coronavirus fears.

Organiser Emily Eavis revealed the full line up with headliner Kendrick Lemar and Thom Yorke added to the final billing.

Paul McCartney and Taylor Swift are the other headliners for this special 50th edition – but following mass cancellations of music industry and entertainment events (including Premier and Football League matches) it is thought the entire festival maybe postponed or axed.

Emily Eavis said organisers had “fingers firmly crossed” the event would go ahead in June, though things are not looking good as Boris Johnson is expected to release a set of emergency laws, one of which includes cancelling all mass gatherings of 500 people of more, including gigs and festivals.

Promoters, venues, and artists are all gearing up for what can only be described as mass cancelations and postponements across the city as the pandemic continues to get worse by the day.

Rather than individual gigs being postponed by artists and their teams, we can expect to see venues and promoters cancelling and rescheduling events by the heap, though nothing has been confirmed just yet.

Outside of the music industry, both University of Liverpool and Liverpool John Moores University have announced the suspension of all face to face teaching for the rest of the semester, and will be switching to online learning to keep students and staff safe.

There is no word yet from Edge Hill University and Liverpool Hope University about whether they are taking the same actions, but we are aware that the situation is being reviewed on a day-by-day basis and the appropriate actions will be taken on all parts.

Check back here for the latest updates on gig cancellations and postponements across Liverpool.