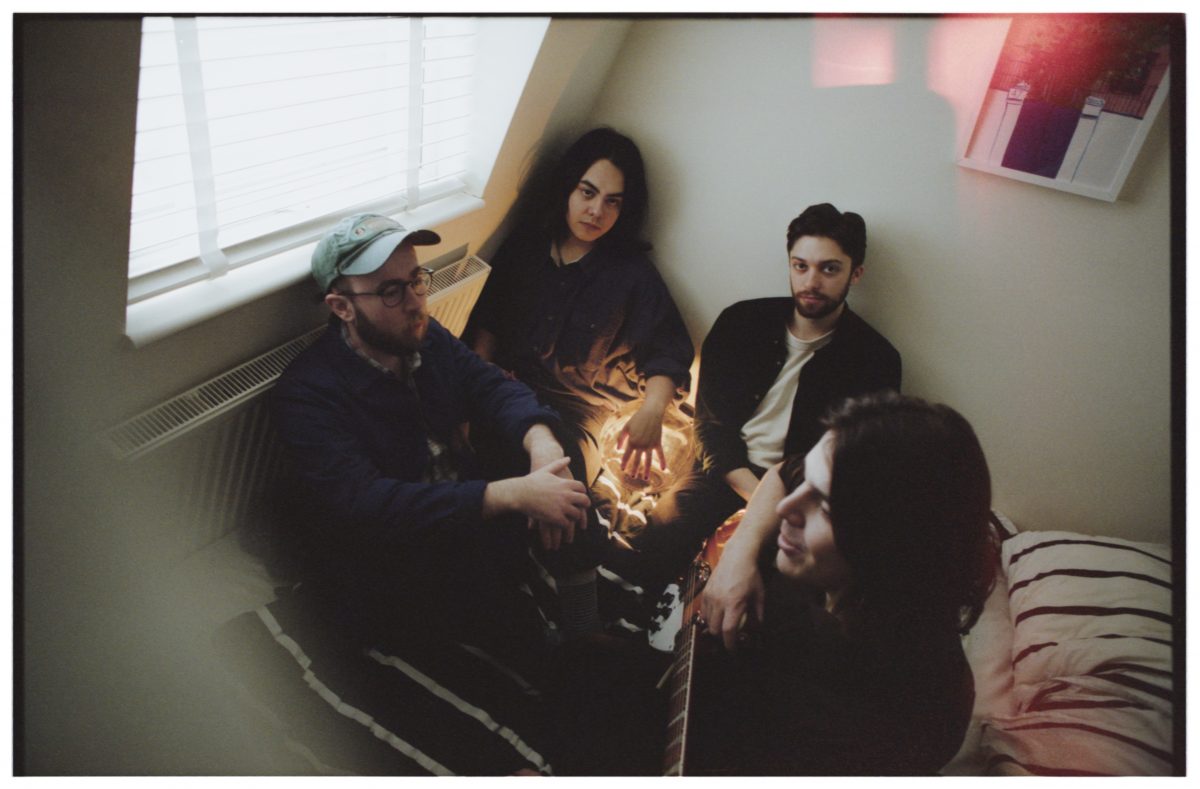 As the country’s still getting to grips with a 50 page rubix cube, Getintothis’ Howard Doupé has the best of the new releases to soundtrack the tea break.

Anyone having fun yet? As we stare at the week-ending  #8 it’s all getting quite the roller-coaster ain’t it.

This week by far, feels like the hardest yet. Whilst we’ve settled in quite nicely into a musical world gigs from front rooms, Tim’s Twitter Listening Parties and our own Zoom output Getintothis LIVE– next one tomorrow at 8pm, the news on Sunday I’m sure you’ll agree was perplexing at best.

Jumping on a particular PDF download Monday late afternoon, certainly created a feeling that not even a chippy tea could improve.

Needless to say, we’re all trying to get out and about that little bit more. If you can find a stranger then you can have a right old chinwag, just so long as they’re spitting distance away.

On the plus side, there doesn’t seem to be many empty aisles anymore.

As we all watch the final summer festivals admit defeat, there’s plenty of proactive action being taken to support the industry through these unchartered waters.

On all levels, rallying calls throughout the social community are spearheading campaigns to keep things afloat.

Newly-signed to the cult indie label Big Scary Monsters, the group have already provided a stark indication of their glowing potential with recent singles Be My Friend and Juggle, introducing their newly-refined melodic sound whilst drawing inspiration from acts including Car Seat Headrest, Sparklehorse, Elliot Smith and The Brian Jonestown Massacre.

Having initially met online via a Gumtree advert posted by frontman Jamie Batten, calling for “like-minded individuals to help create sonic hell”, the alt-rockers have spent the last two years mastering the live circuit, combining JAWS and Basement tour supports with notable festival slots as their profile continues to soar.

Discussing their single release, Batten revealed: “Big was a song I wrote last year when I was up at Edinburgh Fringe Festival. It was meant as an ode to the time I had there, which felt very isolated and gave me a lot of time to think about my choices and relationships I was facing back then.”

“It’s quite a personal song as it was a confusing time and things weren’t straightforward… I think Big is the most important song to me on the EP, it still affects me and is a comfort to me today.”

With closing lyrics “She’s got the greatest mind, she’s got the saddest smile” for now, we’ll have to be content of imagining Honey Lung on a stage they’re deserved- oooh something like Primavera Sound, in blistering sunshine, cooling breeze, close to strangers, warm lager in hand. Ahh bliss.

With just over a month until the release of new album GENE, Sam Eastgate AKA LA Priest has shared new single, Beginning. Marking a dazzling opening to GENE, Beginning hits with an inescapable melody and the first introduction to GENE, the custom built drum machine on which the album was made. As LA Priest says: ‘…and in the beginning there were drums and LA Priest said, ‘Let there be fire.’

Beginning is accompanied by a video directed by Joseph Bird, in which we see LA Priest in a total nomadic and exploratory state – almost shamanic – rambling across the vast expanses of his home of North Wales with a 7ft Flying-V guitar.

Tomorrow night LA Priest will perform ‘Live From The Shed’ via live stream, playing new music and the hits.

Montreal’s Pottery are back today with Hot Heater, the latest taster from their much-anticipated debut album Welcome To Bobby’s Motel, which sees release on June 26 via Partisan Records.

Hot Heater more than lives up to its incendiary billing: all chugging low-end, blasts of disco beats and tribal chants from the Pottery crew.

Discussing the track’s genesis, the band offer, ‘While there are hints of environmental themes on this one, we mainly wanted to make a disco song with a robotic feeling, something that could be easily chanted.

Austin was originally really interested in heat as a musical concept/feeling – some of the early album titles we threw around were Hot Hot Hot and Sun Fever – and there are a bunch of other heat references on the album (see previous single Hot Like Jungle).

In the studio he’d be joking around and yelling stuff at us like “let’s make it hot!” right before a take. A lot of that didn’t end up totally sinking in, but some did… like on this song.’

We’ve been waiting for Jade Hairpins next release ever since their debut Liverpool gig at the Kazimier Stockroom back in February, which was electric.

Jade Hairpins move in and out of reverie in the rose-colored video for new song Dolly Dream, bringing you into their world of joyful movement, wide-open spaces, and sunny yesterdays and tomorrows.

This piece of musical clockwork is laden with Fender Rhodes keyboard, analog synths, layered strings, and soaring harmonies which all set the stage for the reveal of their debut full-length Harmony Avenue on May 29.

Huge anticipation for this debut from us at Getintothis HQ. Could we be witnessing another landing in our end of year polls with this one?

bdrmm: A Reason To Celebrate

A Reason To Celebrate is the second single from Hull/Leeds five-piece bdrmm’s eagerly anticipated debut album, Bedroom, which is released July 3.

Recorded by Alex Greaves (Working Men’s Club, Bo Ningen) and mastered by Heba Kadry (Slowdive, Beach House) it is a marker of the band’s newfound maturity. Slower than the frenetic post-punk of last single Happy, after a minute and a half it bursts into life with a coda that is properly anthemic: more skyscraping than shoegazing.

Frontman Ryan Smith explains: ‘The lyrics come from a place of realisation and understanding. It’s a battle between what you want and what you need to do. It’s about proudly, yet stupidly, letting go – and the voice in your head giving you all the different reasons why you should.’

From lockdown in Northampton, slowthai has shared ENEMY online, the first new music to come from the breakthrough British artist this year.

It’s nearly a year to the day since slowthai released his Mercury Prize nominated and unanimously acclaimed debut album Nothing Great About Britain.  Since then, he has appeared on a handful of important releases, most recently including Mura Masa’s ‘Deal Wiv It’ and Gorlilaz’s Momentary Bliss. ENEMY, however, is the first new solo slowthai music to come since the album.

It’s a sit-up-and-listen two and a half minutes of signature slowthai that finds his long-term collaborator, live MC and good friend Kwes Darko once again on the production alongside SAMO and slowthai himself.

Badly Drawn Boy: I Need Someone To Trust

The third teaser to be released from Badly Drawn Boy’s forthcoming ninth studio album (first in over a decade) is I Need Someone To Trust.

It’s the perfect accompaniment to the two tracks released over the last couple of months. There’s classic songwriting but with a fresh, upbeat spark and renewed vigor.

Damon Gough himself says of the track, ‘(it’s) a song about redefining yourself after experiencing some heavy blows in life and restoring some pride.’

The album, Banana Skin Shoes is a truly personal and heartfelt collection of songs, a huge statement of intent and the most glorious, colourful warming, honest pop record you’ll probably hear all year. We can’t wait!

STANDING ON THE CORNER: Angel

STANDING ON THE CORNER returns to share a new single, Angel marking the first release from the Art Ensemble since their critically-acclaimed 2017 mixtape, RED BURNS.

The Ensemble produces musical, visual, and experiential works that equate hyperlocal incidence to cosmological wisdom. Visiting sites of emotional resonance under the weight of subjective histories and traumas, the Art Ensemble seeks to uncover the mysteries and the ghosts of hidden truths through focused interpretation.

Angel (Life and Death of the Earth in the Key of F), the accompanying video stars The Black Community and BRER SOUL himself, Melvin Van Peebles, as a wayward astronaut slowly bracing toward a black hole somewhere beyond our known universe. Released from this planet, on the run with no reins and earthly concerns becoming distant memories, our fugitive hero dreams of deliverance.

With consciousness waning, and only the pure BLACK of unknown ahead, what awaits our protagonist? Tune in to the mysterious cycle of awe, resolve, release, and to the elsewhere of space, a setting where we can see existence itself regenerate.

Diamond is the new single from Indian Irish artist Shivum Sharma, a singer, songwriter, producer and DJ from South London.

It’s a gorgeous, sun drenched track ‘that indulges in its own sadness. It’s about feeling totally unable to tear yourself away from a situation you know is detrimental to you. Living in denial, desperately hanging on to something that is inevitably coming to an end.’

‘This music is sacred to me. Even when a song from this time is lamenting, it still makes you move. It is still so rich in sexuality and elegance. The unique energy it possesses is timeless, and our aim was to carry some of that through to today’

His career began in 2014, releasing debut track Flicker, since then he has spent time writing and producing for other projects. He returns after a long hiatus with a clearer vision of himself, expressing a refined soulful South London sound from a queer perspective.

Nicole Atkins has shared Mind Eraser, a new track from her upcoming album Italian Ice. A groovy meditation on lucid dreaming co-written with My Morning Jacket‘s Carl Broemel, the string-laden song draws from a wide range of influences including Serge Gainsbourg, Radiohead and Roy Orbison. It’s a wholly distinct addition to an album that Atkins has described as ‘an acid trip through my record collection.’

Inventions ready their new album Continuous Portrait with the lush, with this warm title track.

The duo – made up of Eluvium‘s Matthew Cooper and Explosions In The Sky guitar player Mark Smith – follow the spry rhythms of opening singles Outlook For The Future and Calico with the gentle, woozy, introspective title track.

The track opens with samples of wood doves and slowly unfolds with soft chord waves and flickering guitar melodies into a warm, heartening embrace.

Both of the first two singles emerge as distinctively different directions for Inventions. It is that very sense of exploration, pleasure, and ceremonial melancholia which informs the entire album from front to back. New single Continuous Portrait heightens the warmth and nostalgia, a summer morning in a restful open plain.

Scouse quartet L/zard are truly a product of the cultural crossroad that nurtures both a thriving alternative and jazz scene. Being described as ‘one part Alabama Shakes, one part Nina Simone is a pretty unique combination

Back, with their third single Smells Like Love, it’s a brooding narration, holding up a person as an object of worship, adoration and lust, to the point where everything reminds you of them.

Written on a long, cramped National Express coach from London to Liverpool. An out of order toilet, limited leg room and a neighbour eating particularly pungent Pringles was not a pleasant situation for frontman Noah, who was only seen through the ordeal by the idea of what lay at the other end of the journey, 221 miles away.