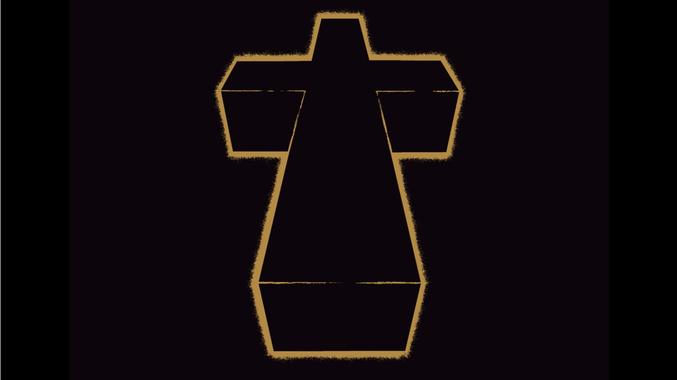 After a relisten to the cult debut album by Justice, Getintothis’ Max Richardson gives some thoughts on an underappreciated gem of the 2000s.

Listening to the opening bars of Justice’s Genesis, the opener of their 2007 debut album, it’s difficult these days to not have your mind drawn to the F1, which sports the track as an unofficial theme tune having replaced the iconic usage of Fleetwood Mac’s The Chain.

As far as album openers go, Genesis is relentless, introducing many listeners to the sound of Justice in a gritty, angst-fuelled dance track that’s lived on through the years as a true cult classic – spun relentlessly by DJs well into the early hours of the morning since it was first released.

Many may know Justice from their smash hit remix of Simian’s Never Be Alone, perhaps better known as We Are Your Friends – however much of the catalogue of the Parisian electro outfit has not received the attention it perhaps deserves.

The enigmatic debut from Justice released back in 2007 is a real, real gem of a record. Yet while this album has a pretty large, dedicated fanbase, it doesn’t often crop up in conversation. You rarely see someone walking down the street wearing a Justice t-shirt.

The title of an album has always been a bit of a mystery. Sometimes it’s titled Cross, a result of the cover of the record, yet the group have released the record to streaming services titled as Justice, a title I guess we should probably adopt from now on?

In a funny sort of way, it’s almost like the record has achieved the unquestionably coveted status of being underrated – one of the cool records that you don’t know how you managed to miss.

Despite recieving nearly universal acclaim from both critics and listeners upon release way back in 2007, it’s a record that’s gone on to hold a very dedicated fanbase of listeners, while also remaining somehow illusive and steeped in mystery – almost like some sort of a secret society.

It’s very difficult to not draw comparisons between the Parisian duo and fellow Parisian electro duo Daft Punk, with the sonic palette of the groups unquestionably similar.

Both acts work in the very similar field of 2000s European electronic dance music, and both include synth sounds that Justice seem to be borrowing from their robot counterparts.

And yet while Daft Punk are, of course, robots seemingly created solely to entertain the masses with electronic dance music – Justice are unashamedly human, with a slightly heavier emphasis on rock in both their music and in the image of the duo.

The music of Justice is perhaps a bit punchier than that of Daft Punk, a more aggressive form of dance music utilising a similar palette of sounds and synth patches yet using them in a different way.

Justice are evidently masters of music production, creating both dark, atmospheric soundscapes alongside lighter textures with ease, flickering between the two through the course of their records.

And of course, it’s that first self-titled album by Justice which perfectly showcases their skills in music production, effortlessly gliding between laid back numbers and full-octane dance tracks with apparent ease.

From those first opening bars of Genesis, with the hauntingly enigmatic brass pads, it’s clear that this album is shaping up to be something special – particularly so when Genesis kicks into fifth gear as a pounding work of dance music.

Justice are almost frustratingly contradictory, in equal measures laid back and energetic, simplistic and complex.

And that’s just it, there’s something truly special about Justice that’s difficult to pinpoint; a sense of innate energy that’s somehow illusive while also being the focal point of your listening attention.

Quite how Genesis manages to cram so much energy into a relatively low-tempo track is, to me, frankly a mystery.

Yet just as the listener gets used to the eclectic Genesis, it’s taken away as quickly as it came – replaced by the equally superb Let There Be Light, a faster work of electronic dance music that’s hard not to visualise as part of Daft Punk’s Discovery LP.

Daft Punk: Human After All

Justice’s self-titled debut is a truly astonishing listen, particularly so if you’ve never heard either the album or the works of the group before.

Tracks such as Stress straddle so many separate genres it’s difficult to dissect confidently – we’re talking about a track that sounds at times like disco-funk, at times sounds like an electro-house rampage, and at times sounds like the gritty soundtrack to a slasher horror film.

The sub-rattling opening of Valentine teases an aggressive track, only to deliver a subdued work of electro goodness – the laid-back ballad of the album, if you will.

This is the sonic equivalent of a bag of revels – while every track may appear deceptively similar, they’re undeniably different beneath the surface, wrapping the album in a sugary coating of intrigue – you’re never quite sure what’s going to happen next.

The image of the cross viewed from the slanted perspective makes for a solid motif, and as such unsurprisingly appears throughout much of the catalogue of Justice – although arguably never used as powerfully as it is when seen in this first LP.

It really is pretty amazing that we don’t hear more said about this album in this day and age, as it really is equally strong from start to finish – it’s a record reserved mostly for electro-loving hipsters, probably why it’s such a firm favourite with this writer.

The eclectic nature of the record doesn’t even seem to be done just for the shock value, it’s used by Justice for genuine musical effect.

Amazingly nothing heard in this record sounds out of place, from the children’s choir in D.A.N.C.E. to the harsh, aggressive synth lead of Waters of Nazareth. Everything manages to fit together, a truly impressive feat considering just how much is really going on in the record.

Even aside from the eclectic nature of the record, this LP really is just a great example of songwriting in the field of electronic music.

Similarly to the other greats of the genre, Justice’s debut never stays in one place for too long, and manages to consistently keep the interest of the listener through the subtle variations in the music therein.

Just as you’re perhaps beginning to grow a little tired of a certain sound, or style, Justice pull the carpet out from underneath the listener and magically transport the record to someplace entirely different.

Of course, when working with electronic music, a genre usually based around long tracks heavily working with repetition – it’s easy for the music to feel just too repetitive, and even stale. Yet we’re treated to enough variation in timbre and other things such as tempo so as to keep the album feeling fresh, and keeping the attention of the listener.

Subtle changes in synth parameters, and fragments of sound being included here and there mean that Justice’s self-titled LP manages to consistently keep the listener on their toes, unsure what’s waiting around every corner.

Combining this fresh sense of variation with an already eclectic record in terms of style and genre, and we’ve got a real treat of an album on our hands.

There’s such a great momentum to this record. The transitions between tracks never stick out too drastically, yet always manage to shake things up enough as to remain exciting and original.

There really is a visceral sense of energy in Justice that’s hard to ignore, from the previously mentioned opening of Genesis straight through to the screaming synth sound introducing One Minute To Midnight, the last track of the record.

This is electronic dance music at its absolute best – carefully crafted and shaped to perfection, not just a random collection of sounds flung together to create something to dance to.

If you’ve never listened to this record, or perhaps even heard of it – you’re undoubtedly missing out.

This is one for lovers of electronic music, but even those who aren’t will undoubtedly get something from the album.

The tracks are all equally well crafted from start to finish, with the album flowing beautifully as a whole work.

If you’ve somehow never given Justice a listen, that’s something that needs to be changed, right away.

Give it a spin from start to finish, you’re in for a hell of a ride.