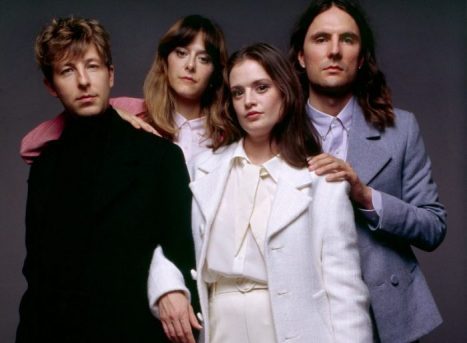 Canadian art-pop band TOPS have announced a new date for EVOL at the Arts Club Loft later this year.

The quartet – comprising of Jane Penny, David Carriere, Marta Cikojevic and Riley Fleck – will be back in Liverpool on November 13 as part of their European tour.

The dates are to support their I Feel Alive album, released earlier this year, their first record since 2017’s Sugar At The Gate.

I Feel Alive is the Montreal band’s fourth LP and further cements their reputation of producing slick and melodic pop with an experimental edge – a nod to their 80s influences.

The album explores themes of growth from painful experiences and how that can aid individual development.

It is the first album for the band since the departure of bassist Jackson Macintosh in 2019 and with Keyboardist Marta Cikojevic.

Vocalist Jane Penny has stated how this changed the dynamic on the current album: ‘From the first time we practised it was clear we were in sync musically, and we found ourselves improvising together at the first rehearsal.’

TOPS are renowned as a tight and energetic live proposition and this new date – with Liverpool not originally scheduled to host a gig on their cancelled Spring tour – is sure to be a sort after evening of harmony-infused pop.

In addition, TOPS have released a new remix of Colder & Closer, one of the memorable tracks from new album I Feel Alive.

The remix gets a shimmering rework from Montreal DJ/producer Patrick Holland, who elevates the track using bright, kaleidoscopic soundscapes.