Getintothis’ doesn’t dish out hero status accolades willy-nilly. So it’s hardly a surprise that seven months on from receiving his Getintothis 2010 Hero Award, Gary McGarvey, has built on his outstanding reputation. We caught up with Liverpool’s superman of music-related artwork and found out how he’s conquering the world.

Getintothis: Hello, Getintothis‘ Honourary Hero 2010 Gary McGarvey, how are you?
Gary McGarvey: I’m very well. Taking a rare day off, having a lie in and then going for a BBQ this afternoon. Looking at the sky, we may need to make good use of the gazebo that survived Glastonbury!
Getintothis: It’s been six months since you received your Getintothis Hero status accolade, I can imagine your life has changed immeasurably?
Gary McGarvey: (Laughs) Yeah, an incredible honour, Pete. Really, never expected something like that – it brought a wee tear to me eye!
My mum had a T-shirt made up with ‘Mother of the Hero of the Year’ on it and wears it seven days a week. She likes to walk up to people she doesn’t know, then start conversations, just waiting for the moment they mention it so she can spread the good word! 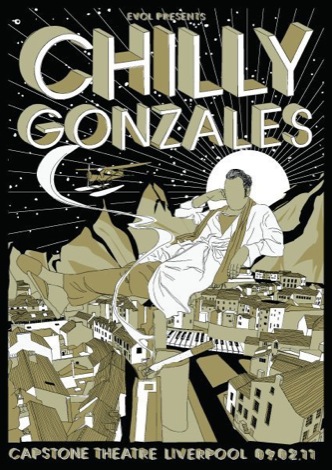 Getintothis: So, anyways, you’ve been very busy in 2011. Firstly, tell us about designing the cover of cult music legend Chilly Gonzalez‘s latest record – how did that happen?
Gary McGarvey: Early in the year I did a screenprint for Evol‘s Chilly show (above) in Capstone Theatre
I had never seen him live so I was really looking forward to the show, especially in that room with that mega piano and set up.
Chilly had obviously seen the poster advertising the show and asked Revo to get in touch with me, that he wanted to meet me after the show. 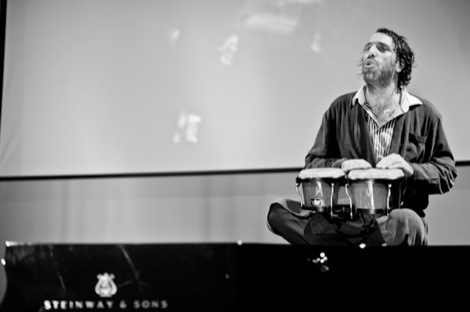 Chilly Gonzalez at Capstone Theatre by Mark McNulty. (Getintothis review).
The show was mint, even better than I thought it could be. I sold my posters then went to meet him. Walked into a smoke filled room where Chilly was winding down after the show and told me how he loved the poster and it encapsulated exactly what he wanted for his new album cover, but didn’t know it until he had seen the poster!

He was a joy to work with. He pretty much gave me free reign to continue the illustration to fit to album cover (above), adding elements of the Parisian skyline as that’s where he is now based.
I’m really happy with the way the final design turned out and hope to work with him again very soon. 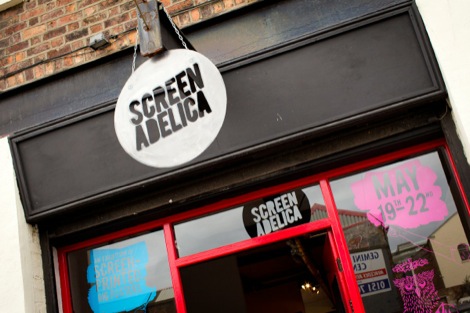 Screenadelica at Liverpool Sound City 2011.
Getintothis: You also hosted your very own stage and exhibition at Liverpool Sound City 2011 called Screenadelica, which proved to be one of the festival’s highlights. You must have been chuffed with how things went?
Gary McGarvey: Yeah definitely. The show came on so much from last year, getting bands involved had to be the next step, the space was perfect for it too.
This year we were able to get more gig poster artists involved off last year’s rep.
With the help of Darren (Roper) at Sound City we were able to curate a great line up and pretty much have a full house of people buying posters every night.
I think the location was ideal for the show, right in the middle of all the venues, so people had to walk by, encouraged to come in when bands were playing rather than it just being a silent art show.
I think a gig poster exhibition has to be more than just an exhibition, we wanted bands to play that artists would want to do posters for in the future, and I think we got that balance just right.

DZ Deathrays: Rad Solar
The room did shake each night, JazzHands, LaFaro, DZ Deathrays, Vasco da Gama, More Than Conquerors, A Time For Burning, This Is Two and I Am Austin all played stonking performances.
We have great plans for next year’s show, bigger and brighter things, watch this space!
Getintothis: So what’s next?
Gary McGarvey: After Sound City I managed to secure a space at Primavera in Barcelona for Screenadelica, we went out there and the show was amazing.
So many people were into it as the screenprinted gig poster doesnt really exist out there as it does here. We had such a great time and we sold loads of posters, saw great bands and made loads of new friends. 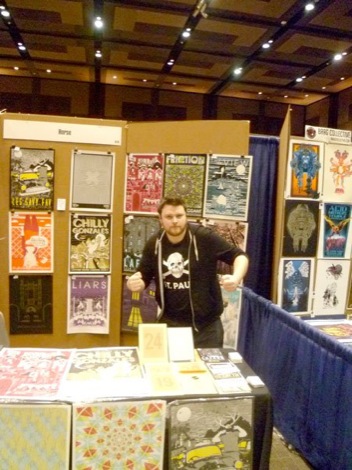 Off the back of these shows, we are doing Screenadelica at Bestival in September, Bordeaux in October and in talks about doing another in New York just before Christmas.
So that’s keeping me very busy as well as the queue of screenprints waiting for me to design for the autumn season.
I’m doing Bjork‘s poster for Bestival which is going to be included in an exhibition they are doing in the woods full of huge gig posters.
I’m excited about getting that under way – I’m a big Bjork geek!
Getintothis: Finally away from your own projects, what have been your live and album highlights so far in 2011?
Gary McGarvey: This year has been great for gigs. Kazimier had played host to most of them, but there are so many contenders for gig of the year and its only half way through.

JazzHands live at Mojo.
Chilly blew me away in Capstone, I think because I didnt know what to expect from him, especially with the Boys Noize remixes. I didn’t know if a man and a piano could get the way he did – genius!
Les Savy Fav, as always, were amazing (Getintothis review). Such a stage show, with tunes to match, a wee treat! Jazzhands at Screenadelica, has to be up there, left so many people talking after that show!
And So I Watch You From Afar in Deaf Institute – I did their album cover for Gangs – so we went over there to meet up with them. They’re an absolutely amazing band, so much energy and so into what they do, they never fail to humble you with each performace.
Fucked Up at Sound City, Dogshow at Krunk, Crystal Fighters… So many great shows, its hard to pick just one!
New music wise, I think And So I Watch You From Afar‘s new album Gangs is immense. I’m lucky to be working for bands that Im really into, these guys being one of my favourites at the minute.

And So I Watch You From Afar: Search:Party:Animal
I had a sneak preview of LaFaro‘s new album last week which is an absolute beast. Mogwai‘s Hardcore Will Never Die, But You Will is a great record but even better live.
Adebisi Shanks second album blows your socks off and I’ve just got the For Eyes EP through the post the other day, such a great band, shame they decided to call it a day.
Discover more Horse designs from Gary McGarvey here.