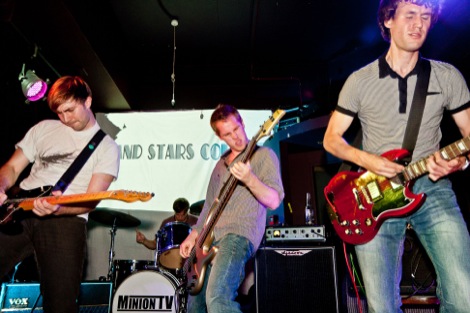 A new Liverpool music night is launched and despite old paths being trodden, there’s much to appreciate down at MelloMello. Getintothis plays spot the influences.

It’s somewhat appropriate that Liverpool’s brand-spanking latest new music night, NewPath, be launched at MelloMello.
A place that lives, breathes and survives on the new yet specialises in a brand which refuses to forget a past which richly deserves remembering.
Take Mello’s coca cola bottles – a delightfully Victorian bottle, all curvy chunky brown glass which is almost asking to be clinked a toast upon. The same goes for their ginger beer bottles – in fact the very thirst-quencher itself is a reminder of golden times gone by.
This spirit extends to the creators of NewPath – a night which they say ‘aims to highlight genres of music that seem to be over-looked in the mainstream.’
This is largely true. However, the name itself seems a slight misnomer, for tonight the three bands on show are very much in awe of their inspirations.
Take Nottingham-based …And The Stars Collide. The very name itself conjures up the twinkly clean post-rock from the early 2000s and though there’s plenty of gusto blustering forth from the stage – namely in the shape of bass player Rob Laben who looks like he’s suffering from a serious hernia injury – it’s not long before we’re playing Pretend Post-Rock Band Name.
Slowly Fading Comet Rush… Dying Elk on the Texan Freeway… Aborted Galactic Space Brain… The Burning Embers Were All That Was Left To Remind Me Of My Teenage Break Up…
Anyways, I’m sure you can do better, and to be fair ASC do rouse us when they slow things down considerably with some beautific moments which recall Explosions in the Sky at their most Christmassy – all sleigh bells percussion, marching drum beats and lovely one-note guitar thrums reminiscent of The Rescue EP. 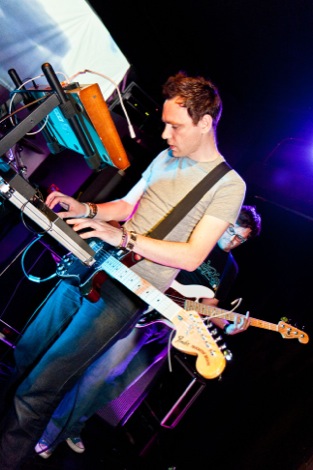 MinionTV
But tonight’s hosts and NewPath‘s house band MinionTV serve to show what their Midlands contemporaries can achieve with a flicker of more imagination.
All the post-rock cliches remain intact – a slow-mo backdrop of pretty skyscapes, fading moons, hyper-drives through deserted dusty roads is married to sweeping instrumentals which build and build and build as five studied looking men rock back and forth.
But what they bring to the table is an experience and a more measured approach which mixes the drama of Mogwai, the electro-jerk of Rock Of Travolta, God Is Astronaut‘s immediacy and of course EitS’ melodic verve.
But, then again, there’s little to prick the ears if you’re after the new. 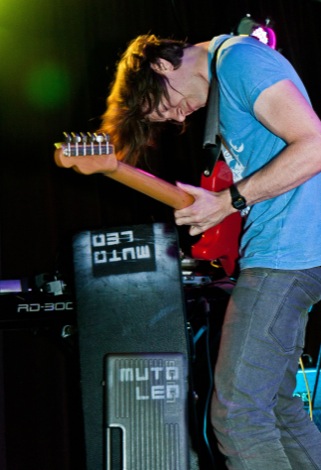 Muto Leo
Muto Leo are tonight’s bright young things. And having caught our attention during May’s Liverpool Sound City we were eager to capture an extended workout.
And, boy, were we glad. Again, like all tonight’s bands, they wear their influences like a badge of honour – but do they wear it well.
The quartet are post-punk extremists; think Foals jacked on a cocktail of anabolic steroids and hi-grade dextroamphetamine. They’re a punishing watch – tight as a drum, and fast as fuck – if this is mathletics, it’s like watching the 4x100m relay on a 30 minute loop.
Faster, faster and faster again. Strings are popped and bass notes are panged before drummer Luke Butterfield splutters a ‘shit, it’s fucking roasting..‘ after smashing another tom much to the delight of their healthy home support.
We’d suggest next time he removes his hoodie. We’d also suggest they throw in a slight change of pace and maybe a few tricks which Yannis and his Foals crew haven’t already mastered.
But for now, Muto Leo are pretty much on the money.
Glass – (Live Recording at Aerial Studios) by Muto Leo
Pictures courtesy of Steve Williams.
http://newpathlive.co.uk/