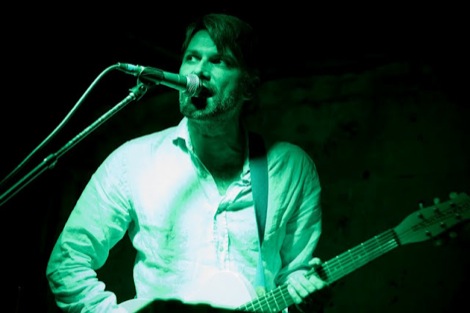 On record, Porcelain Raft is a dreamy romantic yet as Getintothis discovers, his live show is a hammer blow which makes you listen up.

Mauro Remiddi stalks the Shipping Forecast bringing new meaning to the term Italian Stallion.
It’s over two hours ’til showtime and it’s evident the Rome-born composer means business.
Swigging from a beer bottle, he paces upstairs and downstairs, surveying the various support cast before transforming, ala Viggo Mortensen in A History of Violence, into an understated yet ruggedly-handsome everyman-warrior ready for battle.
And battle he does. In almost complete contrast to his superlative debut Strange Weekend, released earlier this year through Secretly Canadian, his live show is a weighty blockbuster, rife with meaty beats, guitars set to stun and piercing falsetto vocals leaving trails of light.
Where the beauty of Strange Weekend, a sure-fire contender for those end of year lists, lies in its dreamy somnolence, his live display retains it’s immersive qualities but packs a meaty punch.
Much of which is delivered by drummer and Ronald De Boer lookalike, Michael Wallace. Best known as former percussionist with Calgary art rockers Women, Wallace attacks his kit throughout and rather like a younger, fresher and leaner Jim White, his variety of tricks seemingly knows no bounds. 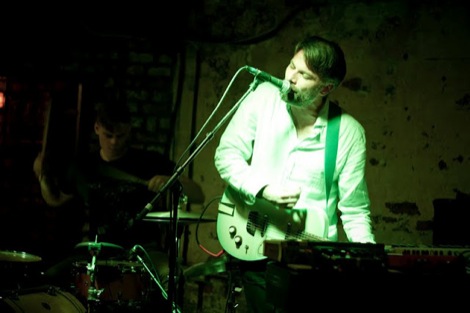 Porcelain Raft live at the Shipping Forecast
On The End Of Silence he alternates electric pads with the wooden click of his kit’s frame before rattling sleigh bells against a tambourine delicately balanced on his cymbals. He closes the the hypnotic space jam of Is It To Deep For You by clattering the lot together creating a meteor strike of propulsive rhythms.
But it’s Remiddi’s show. And he steals it by strangling the life out of his guitar on the meditative hook of Drifting In And Out – a neo-prayer straight from the Jason Piece songbook. Where on record Put Me To Sleep is an aptly-named a glitter-coated lullaby, in tonight’s dungeon surrounds those primal electro drum pads collide with ferocious fretwork to breaking point.
On Backwords, Remiddi implores us to ‘come a little closer, this is a quiet one,’ before brilliant blue light soaks the stage and that searing falsetto loses itself amid a cavalcade of synths and echo. It brings to mind Spirit Of Eden-era Talk Talk, it’s that good.
Closer Unless You Speak From Your Heart is poppier, almost acting as vehicle to transport us back to earth, safely returning us to the comfort of our own being. It’s a triumphant, truly transportative experience.

Earlier, the evening threatened to be anything but. Faded Gold warmed up proceedings with a delicate, often dazzling but ultimately road-testing affair.
This was but the third live outing for FG’s Stefanie Chew, and like a newborn fawn, she’s clearly finding her feet; a stray alarm on the bar’s fridges causes a brief panic while she’s often found looking longingly into the crowd checking we’re all still with her.
We are. And that’s because the music is involving and so very pretty. Recent newie, Sundaze is a celestial bloom of radiance while Last Night I Dreamt Alone carries an aching lonesomeness with a pick-me-up finale. More shows like this and we could be onto something very special. 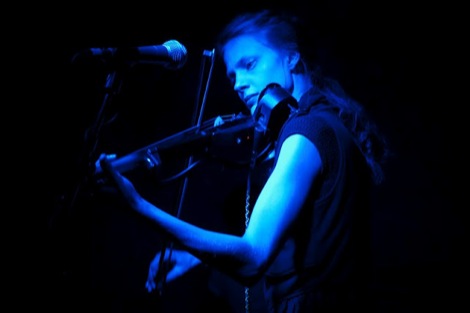 Cold Cut Kid live Liverpool Shipping Forecast
Clean Cut Kid, on the other hand, are frustratingly inoffensive. Polished MoR from the same cloth as Mumford maybe a winner with many but to these ears, after a sprightly fiddle intro and descent into dreary blandness, it has scuttling upstairs to rinse out our lugholes. 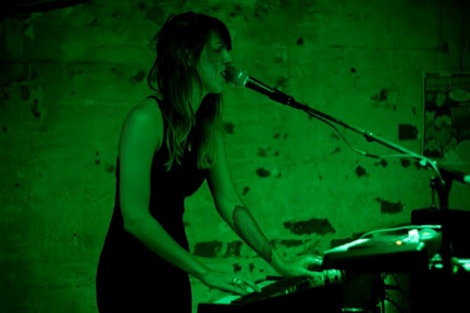 Boy Friend live Shipping Forecast
Boy Friend are similarly frustrating – this time because they hide behind a teasing cool which if dropped they’d be so much more.
Like Faded Gold, they make textured ambient washes of MOOD MUSIK, but gift-wrap it in hipstamatic polaroids and face paint.
Christa Palazzolo, (she of black floor-length evening gown and sea-foam green face paint), marries chamber pop vocals with swooning keys melancholia as Sarah Brown, (gnarly facial expressions and purple squiggle face paint), layers barely-there guitar licks.
There’s enough here to warrant further investigation; subtle yet nagging melodies and Palazzolo possesses a quite beautiful tone but the complete lack of engagement and a want to hide behind their fringes makes for a trying proposition. You have to wonder why they bothered with the face paint.