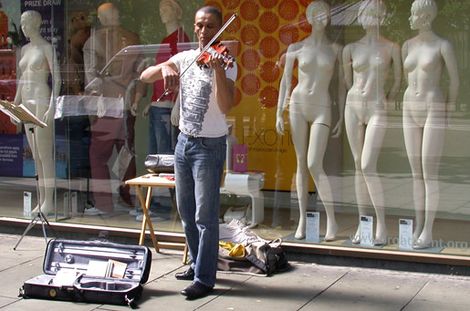 The nights are beginning to get noticeably shorter, the kids are back at school and there is a nip in the air.
The summer busking season is nearly over, and the search is on for extra layers and fingerless gloves for the cold winter months ahead. So what’s all the fuss been about busking in Liverpool?
Nearly three months has passed since the city council made the fateful decision to introduce a draconian and restrictive street entertainment policy on June 8 at this Cabinet Meeting and inspired this petition.
Overnight, busking was to be transformed from a spontaneous and impromptu cultural happening, into a highly regulated and restricted activity.
Church Street and Lord Street, long, wide thoroughfares in the heart of the pedestrianised city centre, were to allow amplified busking in only one, pre-booked location.
Performers would need to agree to an onerous set of terms and conditions in order to get a permit including: no-one under the age of 18 need apply, artists not to occupy a floor space greater than 1.5metres in radius or to sit on the floor, a requirement for £5million public liability insurance, the need to book pitches a week in advance for a maximum stay of two hours, proof of permanent address, photo ID cards, performances that can be stopped for any reason if a council official decides (The now infamous ‘Simon Cowell Clause‘).
The list was seemingly endless. Performers who didn’t sign up to the scheme were in line to receive letters threatening them with prosecution for the crime of trespassing on public land. It was all a little bit Big Brother.

So what were the council thinking? Much of Liverpool’s CIty Centre is administered by the Business Improvement District (BID).
They are an unelected body who collect an extra layer of rates from businesses in exchange for providing a range of additional services.
Ged Gibbons, the Chief Executive of the BID, championed the new busking policy and claimed it would attract the very best buskers into Liverpool.
Keep Streets Live expresses strong scepticism that a hugely restrictive policy would do anything other then scare off good street performers, and never took this claim at face value.
Under the new scheme, buskers would have to book their slots in advance via the BID offices. In other words, no busking could take place without the BID knowing where, when and what was happening.
In the minutes of the Cabinet meeting where this decision was made, the following objective behind the busking policy was spelled out by the council:
‘(to)’Transform Liverpool into one of the most business and enterprise friendly cities in the UK.’ The proposed terms and conditions will achieve this by further enhancing the city centre’s reputation as a top destination where users enjoy an excellent experience during their visit‘
The busking terms and conditions can thus be understood as an attempt on the part of the Council and the BID to impose an extra layer of control over what happens in our shared public spaces, and to deliver an urban environment designed primarily around the perceived needs and wants of businesses, over and above anybody else.
If the policy had said: ‘We want to transform Liverpool into one of the most welcoming, friendly and dynamic cities in the UK.‘
That would have been great, but even that would have been completely unnecessary. Liverpool is ALREADY all of those things.
It is known worldwide for being a vibrant city alive with music; the birthplace of The Beatles, the cradle of Merseybeat, a European Capital of Culture.
In short a city to be proud of. In a place like Liverpool, visitors expect to see lots of buskers and street artists.
There is little public demand for a sanitised city centre. The millions of tourists who come to this great city are not asking the council to ‘sort out the buskers’. 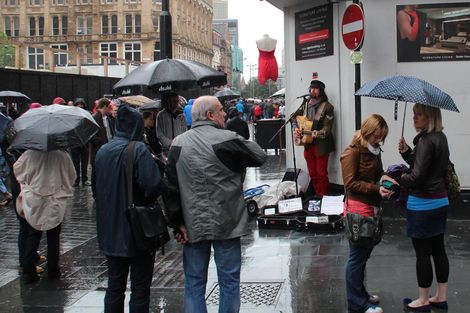 Liverpool shoppers stop to watch Jonny Walker during a rainy Mathew Street weekend
So who is? As is all too often the case, the complaints and wishes of a vocal minority have been allowed to dictate the terms of a policy that affects an entire city.
The Keep Streets Live campaign team is more then aware that not every busker is the next John Lennon.
We know that Wonderwall, when sung for the third time in a row, loses some of its appeal. We realise that the council get complaints about street performers from time to time, and that they have to be seen to respond to them.
What we are looking for is a sense of proportion from the council. At worst, a busker is a minor nuisance who can be politely asked to turn down or move on. At best, a busker can change the entire atmosphere of a street, providing free entertainment and the possibility for moments of unexpected and unplanned enjoyment.
Like the time when this kid walked past me and started pulling off some killer dance moves to the delight of the crowd.

In their heavy handed attempt to deal with complaints about a few buskers, the council have put into jeopardy a vital aspect of the city’s culture.
It’s all too often true that ‘you don’t know what you got ’til it’s gone’. Helping Liverpool City Council to realise this, and asking them to think again, has been the reason behind the Keep Streets Live campaign.
Last week, in response to the legal pressure put on them by the Kirwans-backed application for judicial review, and the weight of public opinion, the council agreed to suspend the busking terms and conditions.
A town hall spokesman said: “We believe that the policy on busking was introduced lawfully and reasonably but we do not want to see public money (Nice PR spin guys but…) spent on legal proceedings which we feel are unnecessary.
“Given that the policy on street entertainment was always going to be reviewed we believe that the best way forward would be for all parties to discuss issues of concern during that review which will be completed in September.”
The council has spent two years of time resources and and scarce public money drafting this policy in the first place!
So while we at Keep Streets Live welcome the suspension of the busking terms and conditions, and we applaud the council’s new-found concern for not spending public money unnecessarily, we note that, if only they had taken notice of the concerns that were raised before they brought in this policy, they would have saved a lot of time and money.
While they did speak to a few performers, including me, before they changed the rules, they didn’t listen to our many concerns. It was not a true or fair consultation.
That is why, with the help of Kirwans Solicitors, we have had to challenge this policy in the courts.
We only had three months to make our challenge before the legal time limit for judicial review expired. It is suspect that the council planned to have their own ‘review’ after three months, just long enough for the threat of legal action to subside.
The council claim that our legal challenge is ‘unnecessary’, and that they were always going to review the policy. In fact, there is no mention of a review anywhere to be found in their policy documents.
All talk of ‘reviews’ has sprung up in the light of the opposition that this council decision has faced. We believe that the legal action we have taken has forced them to focus their minds.
We now call upon the council to formally abandon its busking policy and to make a fair and fresh start.
Liverpool was the launchpad for a musical revolution that still echoes around the world today. It is no surprise that people come from all over the globe to visit this wonderful, diverse and exciting city.
We want these visitors, and the people of Liverpool alike, to walk down streets filled with life, filled with colour and filled with music.
These are challenging enough times for all of us already without the added burden of ill-thought out, absurd and draconian restrictions on street culture.
There are deep social problems to be faced like violent crime, drug-dealing, homelessness, the housing crisis, crumbling infrastructure and youth unemployment to name a few.
We are certain that the local authority and the police have many more important issues to be focussing their limited time and efforts upon then chasing the city’s buskers around and frightening people with nebulous talk of trespass prosecutions.
A voluntary ‘best practise’ busking code, underpinned by good relationships between buskers, the local authority and the other users of the shared space of the city centre would go a long way towards addressing the council’s concerns about street entertainers.
For those buskers who, from time to time, do cause a genuine nuisance, there is a wide, existing framework of legislation available to deal with them, like the Public Order Act, Highways Act and the Environmental Health Act to name just a few. There is little need for an additional layer of red tape and restriction, especially one that does such damage to the already vibrant street culture of the city.
We are glad that Liverpool City Council, albeit under strong legal pressure, has listened to the campaign and suspended their busking policy pending the prospective judicial review.
Keep Streets Live now joins David Kirwan in calling on them to take the final step, and to drop it all together. Then, and only then, we look forward to working with them, with the help of the Musician’s Union, on a genuinely collaborative busking policy that brings people together and enhances the life of the great city of Liverpool.
Further reading:
Getintothis video and report: Liverpool’s buskers take to streets to protest against council’s new rules.
COMMENT: Liverpool Council Putin the boot in.
Getintothis video and report: Why Liverpool loves busking – and why some find it a public nuisance.
Liverpool bookshop protests over jailing of Pussy Riot.
Liverpool City Council forces Static Gallery to end live music programme.
A Week in Celebration of Liverpool’s Spontaneous Street Culture
Buskers to take legal action against Liverpool council over “highly restrictive” new rules.