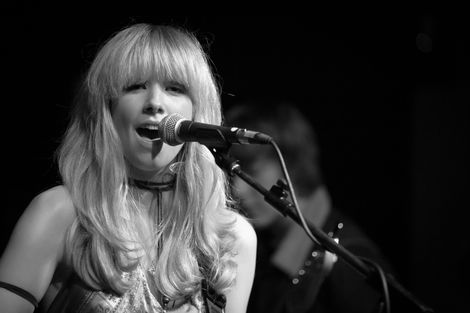 The Sundowners came loaded with fun and rollicking good tunes for their first outing at Edge Hill.
Tight and super-tuneful, they pumped out song after song of infectious, melodic pop – which went incendiary when they turned up the gas for heavier numbers.
Vocalists Fiona Skelly and Niamh Rowe charmed the student crowd from the opening single Hummingbird through to a storming cover of Jumping Jack Flash which had exuberant boys lapping it up down the front.
By turns sassy and sensual, at others foxy and ferocious; Rowe’s vocals providing much-needed bite amid Skelly’s breathy purr while the collective’s dual acoustic and electric guitars added depth and weighty drive.
Clearly enamoured with the booting Edge Hill sound, coupled with a crowd clearly won over at the first time of asking, the band appeared at home laughing and sharing anecdotes.
Alfie Skelly on sprawling lead guitar, Tim Cunningham on bass and Jim Sharrock on drums displayed the craft and energy needed to channel a West Coast, late-60s summery vibe – but The Sundowners are more than a melange of influences; they’re the real thing and 2013 is sure to bring an army of new admirers. Biro their name on your satchel now.
Support was provided by alt-rock quartet City Rise, who attacked the night with a wild energy. It will be interesting to see them in less merciless mood.