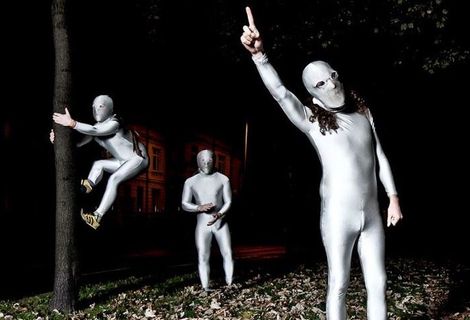 Barerbos are Liverpool’s lycra-clad superhero noise terrorists. Combining a distinctive look with a ferocious sound, they’re as unique as they are thrilling, yet they tell Getintothis’ Joseph Viney they were more surprised than anyone to be on the GIT Award 2013 shortlist.

The proverbial GIT Award dinner table will not haunted by spectres at the feast; instead it will be subject to the bemasked, audio visual and lycra-clad terrorism that Barberos are keen practitioners of.
The Liverpool-based electronica trio have landed with an almighty racket, as if crash landing a ship that has traversed millions of light years to get here.
These would-be aural superheroes offer not only crunching, alien sounds but a rethink of how music and visuals can be stretched to a whole lot more than the sum of their parts.
Their last EP, the rather terrifying OOO, did much in the way opening eyes and ears to an entire section of Liverpool’s music scene that remains oft-neglected and unreported.
Their latest record, You Vs. Us, Us Vs. You, a split with the riotous Italians Dispo, is another keen step in the right direction for a trio looking to destroy the status quo.
Adorned in silver lycra (courtesy of a fetish gear trader based in Rotterdam), Barberos ensure that their shows retain a measure of the organic, contriving to combine a number of different elements:
‘The idea of visuals initially was to have them projected onto us, like a living cinema,‘ explains PL – one of two drummers in Barberos. ‘That’s where the attire came from; we needed projector-style clothing.‘
Indeed, Barberos are so out-there and willing to define their own sounds and aesthetics that their inclusion on this year’s GIT Award shortlist took them a little by surprise.
Their nomination will not only deliver them on a plate to those looking for new sounds on the edge, but Getintothis has offered plenty of vindication for their surrealist mores.
‘It’s a great thing to happen, but I’m still shocked,” exclaims PL. ‘Getintothis has written some amazing things about us in the past, so things like that as well as this nomination give us another motive to continue doing what we do.‘ 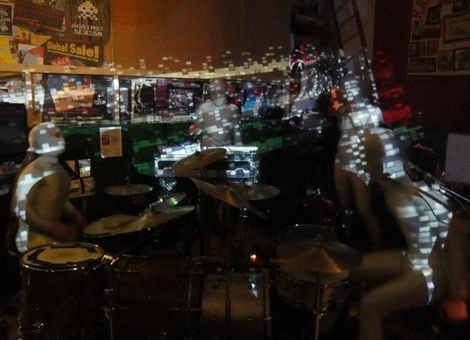 Formed in 2008 and cobbled together with members as far-flung as the cultural abyss of Milton Keynes and the sunnier climes of southern Europe, they offer a little bit of everything.
‘We all have very different backgrounds,” explains PL, over a suitably crackling ‘phone line.
“UJ (synth) is a classically trained pianist with a strong interest in avant-electronica and GJ (second drummer) has an affinity with dub, particularly people like Jah Wobble, and the way seemingly normal, basic sounds can be manipulated into something altogether more strange, whereas I love prog and lots of Japanese noise music like Melt Banana.‘

They are ultra-unique even in a city that prides itself upon variety, change and difference. PL and his Barberos charges revel in their status, and claim that its people’s reactions to the group that seal the deal.
‘I love it, being different and standing out. I like hearing and watching people trying to describe us, but it has an appeal and ultimately it keeps people guessing and coming back for more. Our shows draw a lot of different people; music lovers, theatrical types and just those that are curious.‘
Of course, the sceptical among us may charge Barberos with subsisting solely upon a gimmick, but that’s not the case. As well as very evident musical chops, their stage philosophy is also as well thought out and rehearsed… but could they ever survive without the costumes? PL is ready for this one.
‘We’ve had the discussion loads of times but it isn’t solely about how we look.
‘Compared to say KISS or Slipknot, they were created with individual characteristics. With Barberos the idea is that we look almost the same, apart from GJ who has big fucking dreads poking out of the back!
‘I can’t imagine us without the costumes. It’s not about saying “LOOK AT US”, it’s all part of the idea of collage, art, visuals…and of course spandex.‘
With the coveted GIT Award nomination under their belts and growing plaudits that will only ever increase exponentially, the future looks bright for Barberos. In true, unassuming fashion, PL and his group have plenty to be grateful and thankful for.
‘We love touring and we love to give back to the scenes in Liverpool and beyond. Liverpool is our base of operations and I’ve played some of the best shows of my life here. Some of the work being done in this city is nothing short of amazing.‘
After the dust has settled on the GIT Award 2013, they may well find themselves at the very heart of this amazing work.