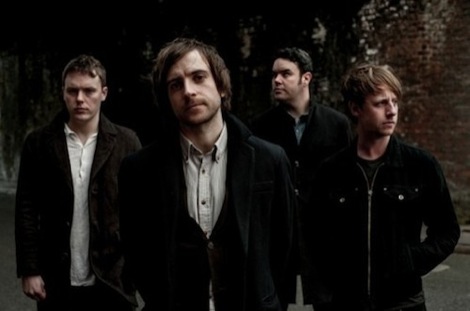 What’s in a name?
Depends what it is of course, but naming your group after a Tom Waits song might be asking for trouble.
Hardly a review or interview can go by without mentioning it (whoops) and the name might give new listeners the wrong impression about what to expect, or indeed it might just put people off the idea entirely.
Waits’ song is a minute or so of vocal experimentation; harsh barks and general weirdness, recorded during an early morning flash of inspiration in his bathroom.
There are some similarities between song and group; a willingness to push boundaries, defy expectations and the act of making noise for its own sake. Both are imbued with the real rock and roll spirit.
However, Clang Boom Steam offer a damn sight more than that.
Comprised of Garvan Cosgrove (vocals/guitar), Charlie Mullan (guitar), Giulio Vaccaro (drums) and Conor Simpson (bass), Clang Boom Steam are one of the more powerful and intriguing groups to come out of Liverpool in recent times.
It’s not just Waits’ sound that has been studied and twisted into something new. They cherry pick the best elements of artists like Nick Cave and Neil Young and apply their own, almost demonic, lather over the top of it all.
Garvan Cosgrove’s deep, brooding vocals fight against the feedback-drenched opening of Clan, the pounding, high-octane delivery of I Look Better In This Light and the rapturous Fort St. Gabriel.
“This is our first year out of the traps, so to speak, and we’re still on the rabbit’s tail” remarks Cosgrove.
“We’ve been lucky enough to turn the right heads which, in turn, have afforded us some good opportunities locally. Liverpool Sound City, BBC sessions, LIMF and FestEvol.
While Cosgrove, like the rest of the group, acknowledges that they have been in the right place at the right time, but remain bullish about their talents and their future. And why not?
“We’ve built a solid basis here in Liverpool over the last eight months but our sights are on a more national presence. Resting on relative past glories is not an option and never will be“.
Fighting talk for sure, but when you hear their record and see them live, you won’t doubt that they mean every word.