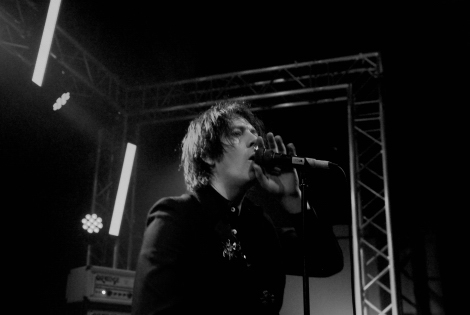 It doesn’t matter what advances are made in technology, what strands of thought come to dominate and whatever prevailing trend is ‘in’ in music; there’s always time for some good ol’ fashioned rock and roll.
You need only take the most cursory of glances at Getintothis to see that the spread of styles and techniques is so far and wide that the horizon soon becomes unassailable.
Yet RnR survives, like a power-chord toting cockroach in a nuclear dubstep fallout. They’ve been predicting its death since the day it started and still we talk about it.
Alas, if tonight was anything to go by, Jim Jones Revue are far from a good advert for this most classic of styles.
On record, their rambunctious, western saloon, table-breakin’, whiskey swiggin’, woman shaggin’ thud is pretty addictive. Plinky-plonk piano rings out against strained guitar lines and Jim Jones’ voice is like an apprentice Tom Waits, with vocal chords that have been hung out to dry in the smokehouse.
However, tonight it fails to translate. Songs like It’s Gotta Be About Me, the opener from 2012’s The Savage Heart, that should be led by its doomy, descending piano hook fail to ignite the place or capture the imagination.
Everything else is in place. The group’s eponymous vocalist struts and preens, trying to capture some of the charisma of his cult-leading namesake, while the rest of his band look suitably greased and ready to roll.
It’s hard to pinpoint just where and why it feels so wrong. A dull atmosphere permeates, and numbers that would get people going wild on any other day fall far too short of the mark .
By time we get around to numbers like Collision Boogie and Never Let You Go, it feels like too little, too late.
Jim Jones Revue have made the fun seem unfortunate, and given that a number of the audience are checking their watches throughout, it seems the malaise had spread some time ago.
Things end with a sigh as opposed to a scream and a very odd sense of disappointment prevails. 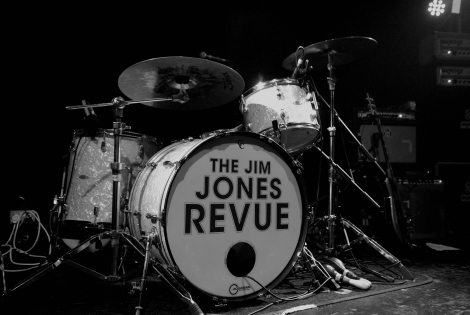 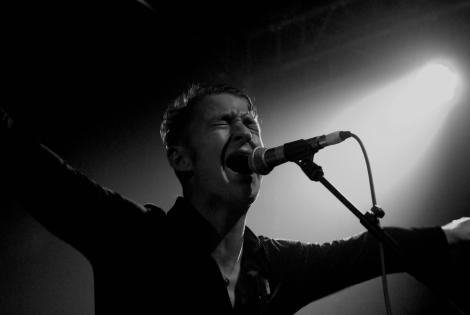 The Amazing Snakeheads at East Village Arts Club, Liverpool
Support The Amazing Snakeheads slithered onto the stage looking like the bastard sons of Rocket From The Crypt.
Their malevolent and ponderous slice of sleaze-rock seemed to fare much better with the crowd who, although smaller, seemed to be charmed by the young and violent trio.
Their lanky, seemingly placid bassist provided perfect foil for their bundle-of-energy vocalist, who sang through gritted teeth and urged his bandmates on during each instrumental break.
The best bands operate like gangs and The Amazing Snakeheads wouldn’t look out of place in The Warriors.
Pictures by Getintothis’ Gaz Jones.
Further reading on Getintothis:
Liverpool’s gig calendar 2013: Guide to essential gigs not to miss the rest of this year
Nick Cave and The Bad Seeds: Manchester Apollo
Future of the Left: East Village Arts Club, Liverpool