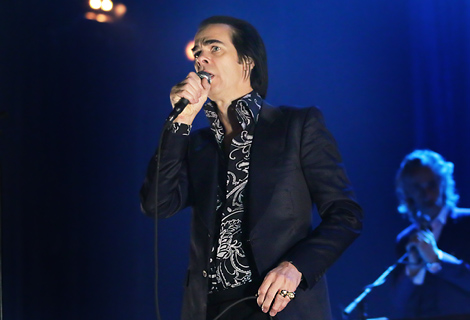 It’s not so much a request as a commandment: ‘Put down your fucking iPhone‘.
Our high preacher is stood bestride the front row, clasping their hands for extra strength – both his and theirs – and some poor soul has decided to capture the moment on their mobile device.
Gig etiquette has come a long way in the 30 years since Nick Cave and the Bad Seeds first started their journey which – 15 albums in – many feel is still hitting its peak.
Cave puts himself out there for his audience, a raw emotional nakedness which he perhaps wants this packed Apollo audience to feel, not record. And boy do we feel it. The phone incident is a rare moment tonight when this dark Australian rock poet isn’t perfectly in tune with his crowd and they spend most of it remembering just what incredible performers this man and his wonderful band are. We have definitely taken them for granted.
From gorgeous piano ballads where you can hear a pin drop (bar the chattering idiots at the back) to astonishing band set pieces evoking Western frontier towns where the gunslingers have the devil on their shoulders, we are treated to a set which spans their whole career.
Prowling the stage and sprinting deftly from the piano back to the more carnal comforts of the front row, Cave is intent on a thorough examination of the themes which have become the cornerstones of his career; God, death, religion, love, murder, sin, redemption. 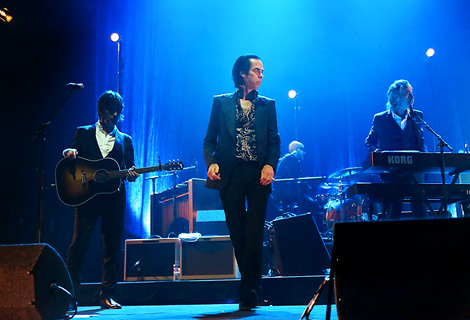 Nick Cave and The Bad Seeds at Manchester Apollo
The wonderful thing is that some of the strongest material on show tonight is from latest record Push The Sky Away.
Mermaids sees a love-struck Cave tell us “I believe in the rapture, for I’ve seen her face” while he turns his attentions to science on a sprawling, magnificent Higgs Boson Blues.
“Who cares what the future brings?” he asks before reverting to type as Lucifer looms on the horizon and Miley Cyrus turns up dead in a swimming pool.
Compromise isn’t in the man’s vocabulary as he urges those cramped at the front of the audience to search for his heartbeat.
The older material has never sounded so good either.
Has there been a better straight-out love song this century than Into My Arms, his ode to Polly Jean Harvey remembered also tonight in West Country Girl, as he urges any “interventionist God” (yes there he/she is again) not to change a hair on her head.
Meanwhile, his tongue seems firmly in his cheek as the “packs of homos roam the streets” in God is in The House.
The Mercy Seat (alongside the epic Stagger Lee the rocks on which tonight’s set are built) finds Cave on death row ready to meet his maker, and the words simply flow out of him, unbowed for now at least: “An eye for an eye, a tooth for a tooth, anyway I told the truth, I’m not afraid to die.” 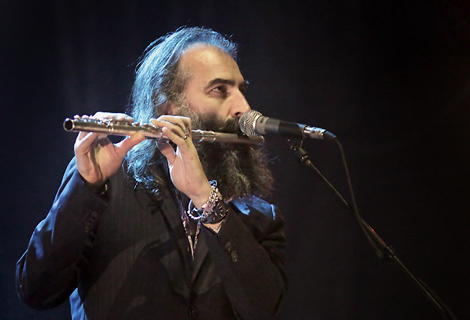 Bad Seed, Warren Ellis at Manchester Apollo
Alongside Cave’s unforgettable lyricism is of course his bunch of loyal sidekicks who bring his vision to life, with Manchester’s own Barry Adamson among them tonight, on keyboards and backing vocals. But it’s Warren Ellis who is probably the only man who could possibly take attention away from Cave on a stage.
A whirling, violin man – plus guitar, mandolin and flute thrown in – a bearded genius- tramp high-kicking a path to maudlin, he acts as the perfect foil to Cave, finding the places other bowmen just can’t reach. You know the Bad Seeds have got it right when Ellis’s bow soars through the air at the end of a track, sending the roadies scurrying to find it.
Tonight he, and the Bad Seeds, keep them busy. And when new song Give Us A Kiss brings a two-hour set to a gripping conclusion, you feel like reaching out and doing just that. After putting down your phone of course.