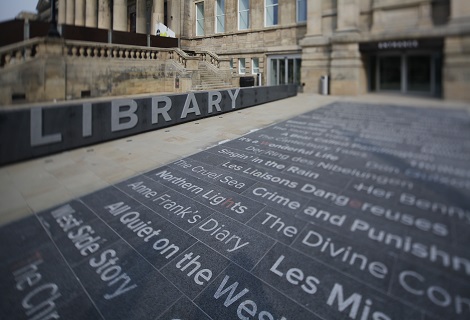 Put down your books and listen up as Wolf Alice gear up to play an historical gig at Liverpool’s Central Library.

London’s Wolf Alice will quite literally enter the record books on Saturday December 7 when they become the first band to gig in Liverpool’s Central Library.
The alt-rock quartet follow in the footsteps of the likes of Dan Le Sac vs Scroobius Pip, Florence & The Machine and Plan B having played libraries during their careers.
Wolf Alice, who played the Kazimier back in September, will play the newly-restored Grade II listed library as part of national initiative Get it Loud In Libraries.
Get It Loud In Libraries director, Stewart Parsons, said: ‘We are thrilled to be working with Liverpool’s Central Library to bring great music to young people who may not have had the chance to see live performance in such a small, intimate space.
‘We’re hoping to change their perception of libraries and in the future bring them opportunities to learn about rock journalism, gig photography, artist management and how to put on a buzzing event in a great venue.’
For further information and to purchase tickets click here.