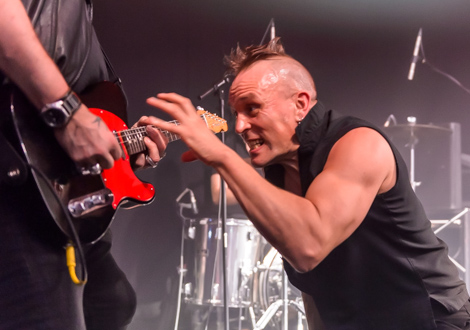 Goldblade headed a loud and reckless trio of groups that don’t do things the nice way, Getintothis’ Joseph Viney was pleased to see the fires can still burn on cold nights.

Goldblade vocalist John Robb is a man with many strings to his bow.
As well as being the tearaway angry man with his aforementioned group of politically-charged punks, Robb steers the ship of music website Louder Than War, has his own radio slot, is called upon by authors and the media for his thoughts and opinions and is generally a man about town.
Indeed, the host of 2012’s GIT Award was an oft-sighted fixture at this year’s Liverpool Sound City; his tall, muscular frame, choice of apparel and hairstyle meaning he wasn’t hard to spot.
But then Goldblade don’t really deal in the subtleties of life, preferring instead to batter you about the head with lurching riffs, barked sentiments and Robb’s stage act which is, to serve you an understatement, rather energetic.
He might not like me bringing this up, but Robb is 52, but by christ it’s a sprightly 52. 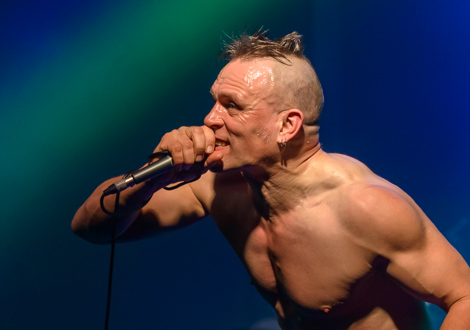 John Robb deigns to get shirty at East Village Arts Club, Liverpool
It’s not long before he leads his bandmates into one maelstrom of noise after another; shirt off, howling, bounding about the stage and generally causing havoc. It’s fascinating to watch and puts a lot of their navel-gazing contemporaries to shame.
Touring in support of this year’s blistering The Terror Of Modern Life LP, Goldblade bring home not so much the murk but the unadulterated filth of our dying blue marble.
This Is War, Psycho Takes A Holiday, The World Is Fucked Up Nowadays and My Mind Is Like An Atom Bomb: all of them signals that nothing feels right anymore. And that’s before the ill-disguised sneering contempt of We’re All In It Together; a clarion call to disobedience against the scaly, Ike-ian lizards that run this country.
Goldblade play up to it and deliver each song like it is the end of the world.
Fuck them all. Leave no survivors. 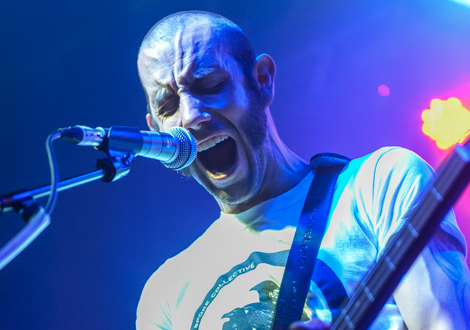 Super Fast Girlie Show’s Pasha Coxhill at East Village Arts Club, Liverpool
Such philosophies are not carried alone tonight, as Goldblade’s two support acts showed that people need to check the underbelly more often, lest they like what they find there.
Super Fast Girlie Show (SFGS) are a murderous trio spearheaded by a twin-bass assault.
Marrying the speed of punk with the gross indecency of twisted metal, SFGS barely let you pause for breath, such is pull of the vortex they inhabit.
Mind Control, 1980s, Doley Boy, Cheese; it’s all there in songs of surreal and biting glory, passages that dare you to damage your spinal column through too much headbanging.
You know when people whinge that they don’t make ’em like they used to? They still do, you just need to dig deeper, get the soil underneath your nails.
Super Fast Girlie Show: it kinda does what it says on the tin. 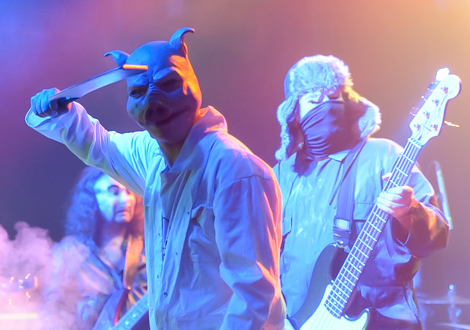 Evil Blizzard: also available for children’s parties
With Evil Blizzard, there is no tin. There’s no real template anymore. If there was a tin you’d be a damned fool to open it, lest you find the moulding corpse of a decaptitated, skinned rat in there.
They look evil, they sound evil and they probably are too.
Fitting that such a cold night should be kicked off by the five-piece’s wintry nomenclature, yet Evil Blizzard don’t warm your heart so much as burn down a cardiac arrest ward and go tearing away into the night, swigging from the petrol can and cackling like pig-headed droogs.
Four bass players and a drummer. Relentless death marches sing out of the sludgiest of aural swamps, wrapping dead tendrils of sound around your dormant brain, whispering horrid suggestions into a swollen and bleeding ear.
Whatever Goldblade may suggest in words vis-à-vis the modern world’s filth, Evil Blizzard are the personification, nay the demonification of such concepts.
Hypnotised as you are already, you barely notice that their final blizz-krieg sees another two bass players join them.
One is John Robb, bemasked in a burlap sack and looking a lot like the Scarecrow from Batman Begins. The second is SFGS’ Phil Hartley, wearing a distorted vision of the jowly, sweating, lying face of Richard Milhous Nixon.
It’s all one big happy family. Sleep tight anyway. 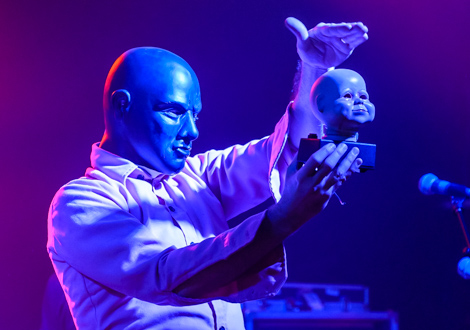 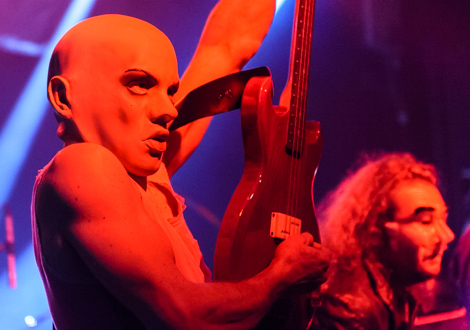 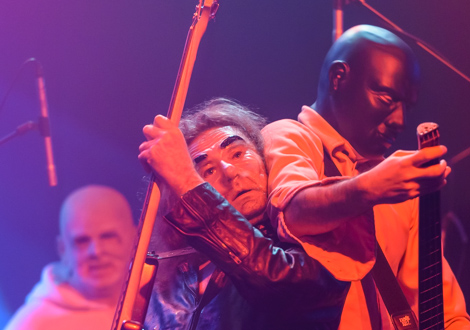