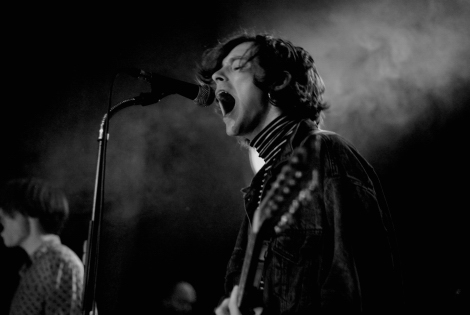 Picture the scene: It’s a late evening back in 2009, we’re nestled in a cosy West Midlands county townhouse and four lads with very little to do are sitting around to their regular audio diet of The Libertines, Foals and Arctic Monkeys.
The floppy-haired would-be frontman idly flicks through his father’s LPs and Disintegration by The Cure catches his eye.
They spend the rest of the night chatting, drinking, smoking, dreaming, caught up in Porl Thompson’s shimmering guitar lines and Robert Smith’s haunted vocals.
That’s almost certainly not how it happened but it is exactly what it sounds like.
Fast forward four years and here are Peace playing Liverpool’s East Village Arts Club to a captivated, capacity crowd; a clear contender for one of the best shows the city has seen all year. 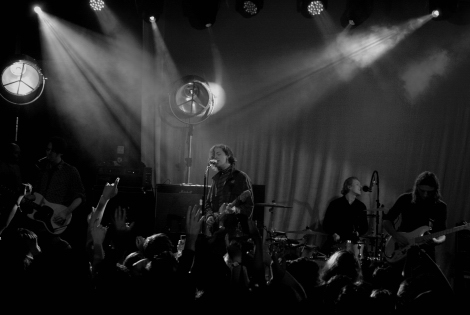 Peace at East Village Arts Club
First comes a subterranean rumble and then the screams as they walk on stage, loud and sustained.
Even before the opening note it is obvious Peace have that envious ingredient of being the band the girls want to be with and the one the boys want to be.
Two rows of young ladies occupy the rail with a restless mass of recent post-pubescent males spoiling for a pit behind.
Waste of Paint begins with Ian Brown exhalations and John Squire licks before sliding into a swirling, anthemic chorus.
Follow Baby channels the softer side of Nirvana with a euphoric refrain giving way to layers of controlled drone and fuzz.
Even at their most raucous there is always melody to Peace’s madness.
Float Forever and California Daze may drift towards sixth form poetry but demonstrate a cultured grip on developing dynamics as both build with increasingly urgent rhythm and force before burning out blissfully.
Album opener Higher Than The Sun wraps the room in driving Jesus and Mary Chain guitars as everyone elevates from the floor with hands thrust into the air, while Wraith and Bloodshake are slices of pop-rock perfection with a Friendly Fires vibe.
There is even time and space for a couple of tasteful covers, a festive take on Wham’s Last Christmas and a 10-minute psychjam version of Binary Finary’s trance classic 1998. Fans of The Maybes? instrumental epic Promise take note.
Peace are primed for the very top, fuelled by the relentless power of youthful devotion and a sound that allies raw emotional punch with musical maturity.

Drenge at East Village Arts Club, Liverpool
Earlier on, backbench MP darlings Drenge opened up to an already near full venue. It was easy to see why the place was packed out as they pummelled and riffed to great effect, with crashing, thrashing waves of noise that seemed almost impossible for just a duo of drums and guitar to create.
Pictures by Getintothis’ Gaz Jones.
Further reading on Getintothis: