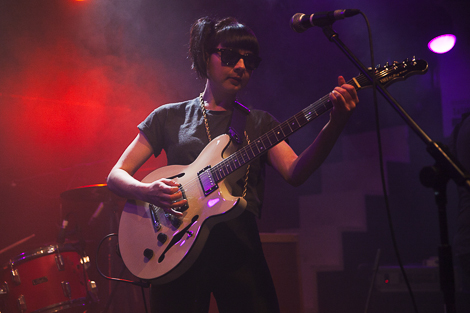 The King of Pop was celebrated by a caravan of artists at the Kazimier, Getintothis’ Michael Fowler watched it all go a little off the wall.

The time is 8.30pm and the Kazimier has only had its doors open for half an hour. The queue for 10 Bands 10 Minutes – Michael Jackson, for all we can measure, was a hundred metres long.
It was at least 20 metres past the entrance to Nation. And it was cold. By the time we finally got in, the place was packed and the room was filled with expectation. Every other left hand in the venue was wearing a white glove they’d been given on entry.
We’re guessing they were made from some kind of thermal underwear, but it looked pretty cool and was a bonus for those who got one. The Jacko impressions were murmuring and thankfully the moonwalking hadn’t started as Organ Freeman opened the bill in characteristic chaos.
They informed the audience that they thought the evening was dedicated to Michael Jordan and that Michael Jackson co-wrote Do The Bartman, which would be their designated cover. They weren’t kidding either, unleashing their inner-Beastie Boys all over the dance floor.
Anyone miserable, walking in from the cold suddenly had a wide grin on their face, and the night celebrating the Prince of Pop had begun. 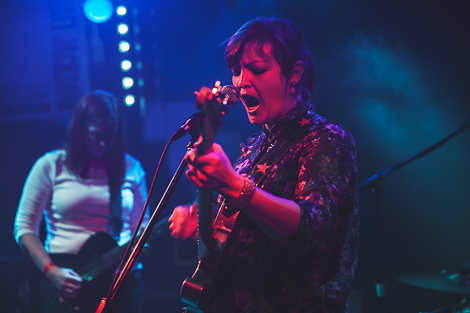 Mean Jean at the Kazimier, Liverpool
Mean Jean followed with a more sombre starter that showed off their shoe gazing style of guitar music. Their second song and cover was of course Billie Jean. You’d have put money on that.
The bass sounded killer as it thumped throughout and the guitars were real heavy, making the hit song a hell of a lot darker.
Third on were The Shortcuts, reminiscent of all the Americana Punk bands of the last decade like The Offspring and Blink-182. They hit out a treble speed version of Bad, which surprised us as we reckoned they’d do the Alien Ant Farm version of Smooth Criminal.
They were truly playing for their supper as their drummer pleaded and urged the audience to “buy our CD, it’s 10 years old.” If it had been ten years ago, we probably would have bought it.
Following The Shortcuts, the Kazimier’s projection screen was lowered. Liverpool’s own New Orleans swingers The Harlequin Dynamite Marching Band appeared on stage; all 20 of them with 10 assorted drums sending a wall of marching rhythms through the venue.
On top of the drums, the brass section screamed out in shrieking harmony, losing their minds in the music. The projector then came alive and the beat of They Don’t Care About Us kicked in, the video consisted of a lone man dancing like a militarised Napoleon Dynamite.
A girl walked past us saying “He’s no Jacko,” and no, but who is? It was cool and unapologetic, and the rousing finish of the tune had everyone in the audience thinking, who can follow that? Zangief, that’s who. 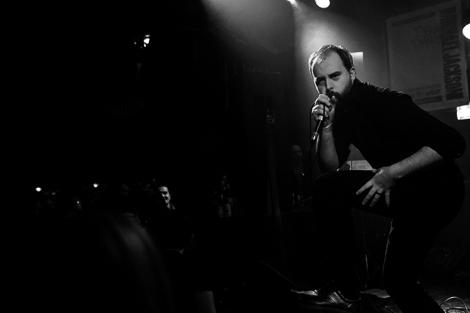 Zangief at the Kazimier, Liverpool
Coming out like beer swillin’ rock monsters and hitting the crowd like a sexfuck to the groin, they growled through their first song before smacking the crowd with Jackson’s Earth Song.
Coming from Zangief, it was unexpected and uplifting, a song that hits the marks for corniness suddenly became the best fun of the night as the singer reached out to imaginary children and readied the audience for a change of pitch.
“Are you ready for the key change? I’m not!” he joked before screaming the next two minutes of Ahhhhs, Oooooohs and Wooos.
Up next were the amazing, plaid shirt-wearing Voo, who laid down an instrumental guitar-pop track, Schnick Schnack Schnuck, that got everyone dancing. It was upbeat and fun. They followed it by playing a cover of Leave Me Alone which, if it wasn’t a night dedicated to the most famous Jackson, we’d have said they were covering an unheard Pixies b-side. They made it their own and even played through their drum kit falling apart. 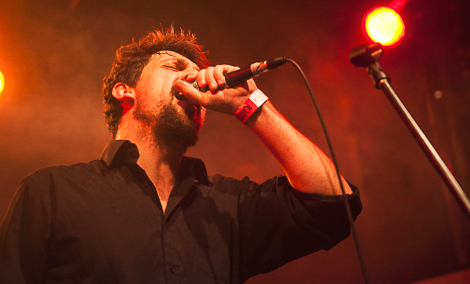 Novice Mathematics at the Kazimier, Liverpool
Dressed as Tony Manero, Novice Mathematics’ lead singer brought the party to the night. The band felt more like a covers band than the other acts, but this isn’t to their discredit.
Their Can You Feel It and Smooth Criminal covers were pitch perfect and their presence on stage was wild and entertaining, in fact the only part that let them down was a bad moonwalk from Tony Manero. Much too stiff, man. You gotta glide.
If there was anyone at 10 Bands… who came close to Michael Jackson’s star appeal it was Natalie McCool. Launching straight into Beat It and wowing the crowd with her slick sounds and unforgettable voice, not one person in the room could say she did not look or sound like a star.
For her second song she dropped the guitar, leaving the music to her band and let loose with the moves doing a rendition of The Jackson 5’s Blame It On The Boogie. McCool got everyone dancing and any thoughts that she had forgotten to take her sunglasses off were dissolved by the brilliance of her performance.
After Natalie, the walking dead arrived on stage dressed as The Loose Moose String Band to entertain the crowd with their own brand of hillbilly funk. 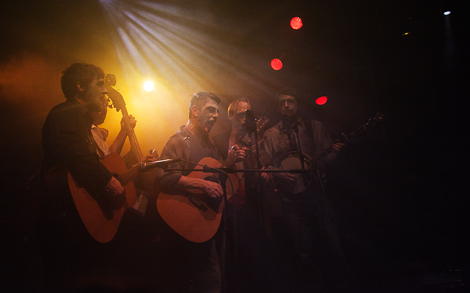 Loose Moose String Band at the Kazimier, Liverpool
They performed Thriller, which would have sounded amazing in a much quieter setting, sadly the sound just wasn’t quite right for the band and they just weren’t loud enough to make an impact on the night.
This didn’t phase the boys, as most of the crowd were still singing along and enjoying their tunes.
And so we reached band number 10, organisers Married to the Sea. Their set began with a slowed down version of The Way You Make Me Feel. It was relaxed, spacey and deep, you’d have thought Diplo had a hand in producing it.
They then sent a song that got the crowd dancing again with Wanna Be Starting Something even making the people on the balconies tap their toes.
Finally Married to the Sea ended the night with the perfect parody of Michael Jacksons’ Beat It video, originally starring Macaulay Culkin.
The band took on the different characters of the video with singer Nick playing a more beardy Culkin, blowing up his dad into space. It was side splitting genius and the production was brilliant.
The band did one more track, Black Or White accompanied by Natalie McCool, who proved her rock star worth by rapping like a Wu-Tang warrior.
The night then descended into pop tunes and dizzy RnB until the early hours of the morning. The lights went up and it was all over for the night. As we passed through the exit into Wolstenholme Square we had only one question on our mind, and it wasn’t about cabs or kebabs.
“Who do you think they’re going to cover next?”