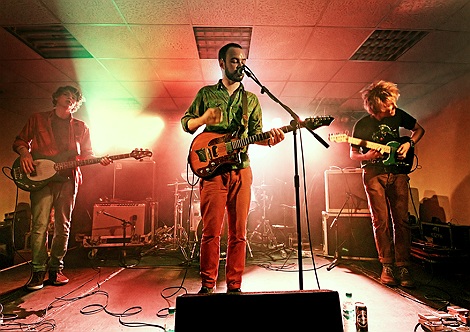 Calculators will be at the ready on Monday February 3 as Tera Melos top an algorithmic shaped four-strong Kazimier billing in a mind bending examination of math-rock.
Liverpool’s finest numerical noisies Vasco da Gama will play their final gig to add a touch of sepia to an otherwise brilliantly colourful palette.
The band have been one of Liverpool’s most compelling live drawers for more than three years, and will leave a massive Portuguese explorer shaped hole in the city’s musical landscape.
Getintothis has charted their rise from an early outing at Leaf supporting Mouse on Keys to naming them one of the top 10 bands to watch at Liverpool Sound City 2012.
In between online auditions to be Prince‘s drummer, Vasco’s Dave Kelly has now taken up permanent residence among Dan Croll‘s touring team while fellow da Gama head, Joe Falconer, is now guitarist in Getintothis tips Circa Waves.
All of which shows what an awesome prospect they were – just check out our further reading section below for the weight of Vasco‘s impressive CV.
Nostalgia’s inevitable central role in proceedings will stand in stark contrast to the music on display, with Tera Melos‘ recent recorded offering, 2013 album X’ed Out, providing one of the most innovative math rock albums in years. The band’s trademark rhythmical chops and unimaginably warped riffs are accompanied with sometimes near-bubblegum vocal melodies to create their most complex – both sonically and structurally – and their most accessible release to date.
As if California and Liverpool’s best weren’t enough, Manchester’s turbo-prog two-piece Cleft will be adding extra range to the face-melt scale of the evening.
The duo’s MO is self ascribed as condensing 14 minute prog songs into three minutes, and the result is as awesome as that suggests, but actually quite a lot heavier. Think (Kevin) spacey (sorry) guitar effects, loop pedals, chops and no-nonsense riffs in odd time signatures and you might have a sort of vague idea of what to expect. For more on Cleft, check out our feature here.
The final piece of the conundrum is another of our Ones To Watch for 2014 – the multi-limbed, brass-infused jazz-pop of Glossom, who are making some of the most complex yet beguilingly commercial melodica we’ve heard from Merseyside in some time.
You’re involved right? What else would you be doing with your Monday night?