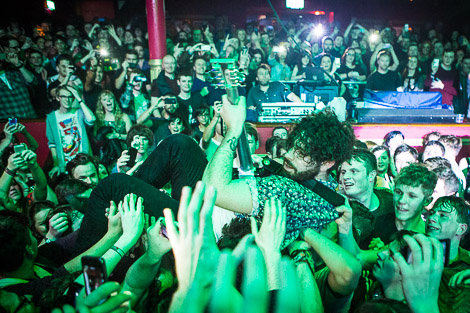 Foals return to Liverpool with a muscular monster of a set while expressing their love affair for the city, Getintothis’ Peter Guy says the feeling is mutual.

‘We fucking love Liverpool.‘ Foals‘ Yannis Philippakis isn’t noted for proclamations of gushing affection, yet as he addresses the steamy sweat-sodden bodies before him, it’s clear he and his band have a genuine affinity for this city.
And tonight, Foals and their followers are positively rampant inside East Village Arts Club.
There’s been a gradual upward momentum since the band’s 2008 debut album Antidotes, and while they’ve maintained their characteristic tangle of taut guitar motifs, rhythmic athleticism and oblique lyricism, there’s little doubting there’s a new-found direct punch to the gut. While the deft single-note plucks of Philippakis and fellow guitarist, Jimmy Smith, are still evident, it’s the relentless tidal wave of riff bollock-battery that’s pushed gratuitously to the fore.
Foals, in essence, don’t dick about anymore. Key to their masterplan is Hawaiian shirt sporting spindle-limbed pipe-cleaner lookalike, Jack Bevan. A one-man Stomp whose clattering performance works in tandem with wide-mouthed, shut-eyed bass boomer Walter Gervers, provides the muscular backbone to the band’s attack.
So where in the past, Olympic Airwaves tremored with devilish malice, tonight it rumbles with wrecking-ball intent as the masses fist the air delivering punctured pockets of steamy condensation.
Indeed, if Antidotes showcased Foals‘ rhythmic racket, then 2010’s Total Life Forever pushed things on in terms of gruff funk and chunkier hooks; the eponymous title track positively bouncing off EVAC’s maroon walls. Blue Blood, while on record, drenched in echo and spidery guitars is transformed tonight into a pummelling neo-metal wallop with Edwin Congreave‘s keys knifing through the mix. The kids go wild.
Ah, yes, the kids. Foals have always enjoyed a split in their demographic, however, this move towards the more heavier rock end of the spectrum has not only pulled in teens who no doubt enjoy revelling in the mud at Leeds and Reading, but has the effect of the entire standing area of East Village resemble a wrestling ring for almost the entire night.
There’s a split: the front which for 90 minutes is a heaving mess of bodies tumbling up and over the safety barrier and the back, which is a circular slam pint of busted bones, bloodied noses and bent fingers. During a particularly insane Inhaler, It’s almost as entertaining watch people rush headlong into each other like drunken crash test dummies.
But make no mistake, Foals are not dumbing it down. If anything, their musicianship is better than ever, witness the frenetic precision during an extended Milk & Black Spiders while Late Night is an exercise in tempered sexual aggression which splurts to a bed-sheet-sodden conclusion.
And what a conclusion team Foals provide. A bracing rendition of golden oldie, Hummer weaves into their customary encore, as Philippakis (who has already dived headlong into the moshpit while also spraying his sodden tousled locks into the faces of those in the front row) embarks in a circuit of the venue as his band break out into an extended version of Two Steps Twice.
With guitar in tow, first he mounts East Village’s bar to the right of the stage, then climbs atop of the mixing desk, strums a little before diving head first into the ecstatic throng below. He’s carried back to the lip of the stage like some bedraggled sacrificial offering. It’s pure theatre – and a fitting finale to a monster of an evening. 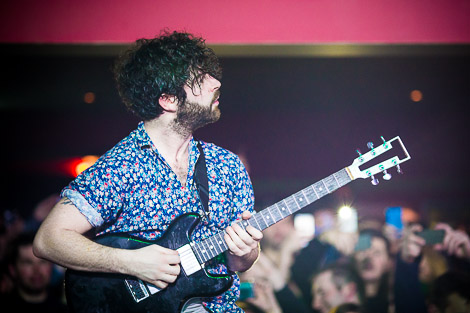 Yannis Philippakis of Foals at East Village Arts Club
Earlier, Outfit proved they too are growing in musical stature with an assured display which mixed up their cerebral dark pop with individual mini flourishes – most notably from the metronomic Dave Berger behind the drum kit.
Centre-piece Two Islands sounded colossal in the EVAC theatre, yet it was the light and shade of Spraypaint‘s Andrew Hunt-assisted guitar howls and brother Nick’s amped up kraut-noise spine-tingler on Elephant Days which really impress.
It’s worth noting just how much the band’s music – and live presence – has grown in such a short space of time, and what with tonight’s headliners exemplifying what can unfold in several years, Outfit’s future, from where we’re stood, looks bright indeed. 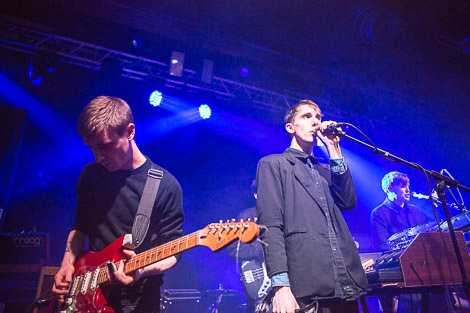 Outfit live at East Village Arts Club
Pictures by Getintothis’ Keith Ainsworth.
Further reading on Getintothis
Getintothis exclusive – win Outfit merchandise and band t-shirts.
GIT Award 2014 launches One To Watch prize.
Liverpool music’s ones to watch in 2014 – the new breed to listen out for on Merseyside.
Liverpool’s gig calendar 2014: Guide to essential gigs not to miss in the first third.