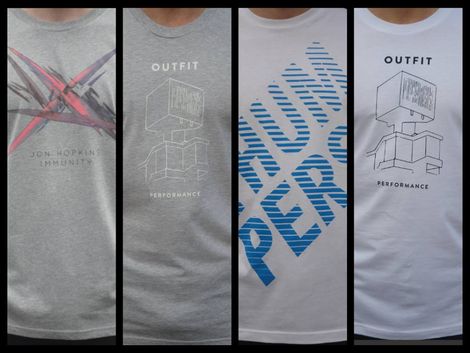 It’s the central irony of the digital age; music is everywhere, clamouring for our attention on the internet, yet at exactly the same time we’re moving further and further away from any real form of the stuff – surrounding ourselves with mp3s or even just a solitary Spotify stream instead of the good solid wax of old.
It’s perhaps no surprise then that people have retreated to the refuge of band t-shirts for some sort of physical connection with the music they love. Even the likes of Topshop and Primark are getting in on the act, flogging culturally redundant designs of legendary acts.
It’s in this climate that a Liverpool-based venture called Funnel Clothing has sprung up, aiming to reclaim the band t-shirt from the terrifying bowels of fashion conglomerates by putting together a line of shirts from exciting contemporary artists – we’re told that the launch will include shirts from Liverpool’s own Outfit as well as the Mercury-Prize-nominated Jon Hopkins and up-and-comers Thumpers, who play Liverpool Sound City in May.
We’re reliably informed by the chaps behind the venture that Funnel is a far cry from a capitalist conspiracy; instead, the aim is to provide a convenient place for music fans to buy merchandise whilst making sure that the independent artists we love get the major share of the cash, and raising money for charity at the same time. The current charity that they’ll be donating cash to will be an initiative called Acumen which provides financial backing for social projects in areas suffering from extreme poverty.
Future shirts look worth keeping an eye on, too – the guys behind the venture (who coincidentally have written for these very pages and Bido Lito!) let it slip to us that machinations are in the works to bring shirts from other Liverpool-based artists to the site as well.
All in all, we can support our favourite artists and give to charity while looking bloody fabulous. And if it goes some way to redressing the digital age’s impersonal connection with music and reclaiming the band t-shirt from the high street, then we’ll take that as well.
We’ve teamed up with Funnel to offer Getintothis readers two Outfit t-shirts.
To win just answer the following question and add Getintothis on Twitter followed by #FunnelClothing
Q) What was the name of Outfit‘s debut single taken from their 2013 album, Performance?
a) Two Islands
b) Two Become One
c) Two And A Half Men
d) Two Pints of Lager and a Packet of Crisps

Funnel Clothing.
Funnel on Facebook.
Further reading on Getintothis:
GIT Award 2014 launches One To Watch prize.
Liverpool music’s ones to watch in 2014 – the new breed to listen out for on Merseyside.
Liverpool’s gig calendar 2014: Guide to essential gigs not to miss in the first third.
Outfit: Performance – debut album, track by track.
Fergie, Black Flag and hardcore’s hypocrisy – who’s the biggest douche in the fight for authenticity?