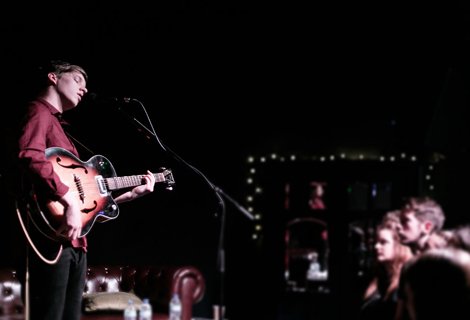 Hot tip George Ezra visits Leaf and leaves Getintothis’ Michael Fowler gasping and panting – or was that just the stairs?

It’s Friday night and a 19-year-old Bristolian, recently shortlisted as one of the BBC‘s Sounds of 2014, takes to the upstairs stage in Leaf. He’s confident, charming and handsome, oh so handsome, and he’s called George Ezra.
Soaring on a high from the award, and an EP that’s not all bad, he’s playing to a sell out crowd filled mostly with middle aged women.
Going to see a young, Sound of 2014 shortlist, getting a tonne of Radio 1 airplay, along with those sculpted good looks and a taste for Burberry clothing, we expected to see a crowd of screaming One Direction fans and Jake Bugg groupies.
We were pretty surprised to find that George‘s audience were a little older. George steps on stage and begins with Blame it on Me, romancing the microphone with his signature, unexpectedly baritone vocals.
His voice is a mix between Paolo Nutini and Johnny Cash, all soulful and low. 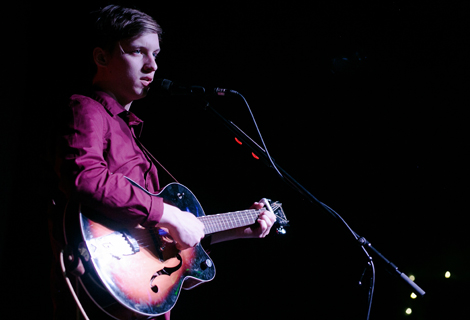 George Ezra live at Leaf Cafe, Liverpool
He followed the first song, swaying with silk like hips through three or more songs that we could review in one syllable, ‘OOOOOHHHHHHHH‘. Now don’t get us wrong, we liked the gig, we liked George Ezra, he just says, ‘ohhh, or ‘ooooh,’ and ‘ohohohoh,’ a whole lot.
Ezra‘s next song was Cassy O’, yeah, another ‘Oh‘ song, is a catchy piece of pop. Either about a burnt out keyboard, a girl who’s losing interest in him fast or an orgasm.
The song has a similar set of chords to the Kings of Leon song, Fans, and thinking about it, his warm and deep vocals wouldn’t go amiss taking the place of Caleb Followhill in the old Kings of Leon. The good Kings of Leon. Before they got clean.
As Cassy O’ began so did a spattering of rhythmic hand claps, and one lady even started shouting, “Come on Georgie!” in between songs. If Georgie plans on taking up tennis anytime soon, we reckon his Wimbledon career’ll be pretty well followed.
Next song was Budapest, it’s a jolly little tune that wouldn’t go amiss in a baked bean advert. It’s warming, it’s sweet, it’s an embrace of a song. The crowd know it and sing along with the inevitable “oooohs”.
George finishes his set with an acapella intro to Did You Hear the Rain? His voice boomed out and vibrated through the bodies of all in attendance. It was powerful.
A lady near us actually had a little tremor, a moment, her own Cassy O’ , and she let out a short, ‘ooh!‘ in excitement to his incredible voice. Did You Hear the Rain? is a dark and cool, western style track, and really shows off that Johnny Cash sound he’s going for.
George walked off the stage to a crowd who wanted more, coming back on to play one short ditty, A Blind Man in Amsterdam.
Though he says himself, “I’m new to this headlining business.” The young songwriter doesn’t show it.
Tonight George Ezra played solo and owned it, making us all ‘ooh,’ at one point or another. We want him back, with a full band, to send us into full blown orgasms. Ooooooooh… 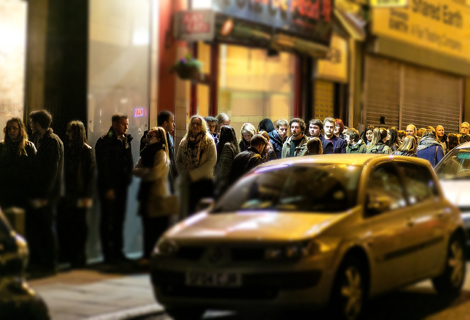 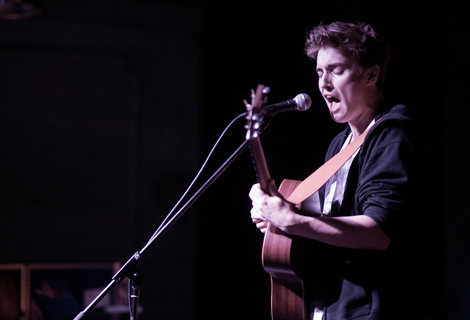