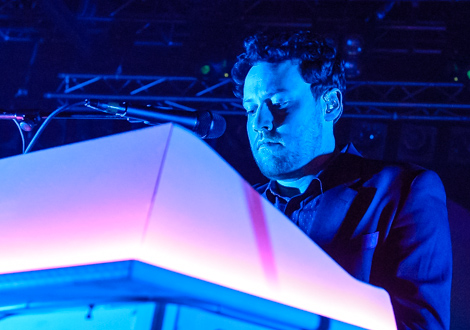 Metronomy, alongside the likes of Foals and Bombay Bicycle Club, have slowly and unassumingly found themselves among the biggest bands in Britain.
Just as comfortable on the front cover of NME as they are on the bedroom walls of sixth form girls, they’ve joined this new breed of mainstream youth culture iconography based on a combination of great, populist leaning songs and just the right amount diversity, at least musically, to make them worth shouting about.
Three albums in now, you can safely call them a mainstay in British guitar music. They will probably never be the type of band who will headline Leeds Festival or play at The O2 Arena, but you could bet your life that in six years time they’ll still be nestled comfortably between Jools Holland and Zane Lowe‘s playlist – not breaking new ground, but sitting contentedly on paths already laid out.
New album Love Letters, as the title might suggest, is about love, lust and all the rest. The accompanying polo necked riddled press shots that supplemented the launch lends itself towards a more nostalgic, schmaltzy kind of love though, as they turn down the beat and turn up the new wave to present their idea of romance through a soft-focus lens.
The O2 Academy feels different for their show – which is the first of their UK tour – this evening. The drum kit is colourfully illuminated, the backdrop is a fuzzy pink set of clouds, the lights are dimmed to a deep shade of red as the whole thing starts to feel an eighties porn movie director’s attempt to make things cinematic.
Metronomy have always played with the notion of being cool and iconized with an obvious, self-reliant indifference that balances them between reluctant icons and cult heroes tenuously, but effectively. The matching burgundy suits they wear tonight look ridiculous, of course they do, but like almost everything with these guys, you feel like you’re in on the joke with them.
This is reflected musically as well, epitomised by the excellent The Bay, as Joseph Mount lingers on Berrrlin as if he is coaxing a cat towards him whilst smoking a cigar in a velvet dressing gown. The Look, another highlight from second album The English Riviera edges up the tempo, demonstrating their ability to strip funk and disco right down to their bones into something bracingly thin while remaining impossibly catchy.
And you wouldn’t go so far as to call Metronomy minimal, but throughout the three albums – all of which are generously dipped into tonight – their music has been characterized by a simplicity that makes it entirely effortless to listen to. This allows the finer, yet absolutely essential parts of their songs to act as centre pieces throughout the records and throughout tonight’s performance, like that noodling synth on Reservoir, or the ‘Shoop-doop-ahhh’s in current single I’m Aquarius.
These are little touches and nuances that are so distinctly and indisputably Metronomy, where not a single note feels waste or forced, graciously offering themselves to anyone who wants them like a show dog that enjoys affection but doesn’t rely on it. Great music doesn’t always have to sound complicated, even if it is.
Metronomy’s coherence sounds remarkably consistent tonight. Getintothis remembers seeing them at Korova in 2008 (see video clip below), as they struggled to pair two parts of the same song together in one of the messiest and loosest performances this side of a psytrance rave.
It very much feels like a victory lap here in the Academy this evening, both for EVOL – who are celebrating their tenth birthday – and for Metronomy, who are reaping the rewards for being gleefully, completely and unflinchingly themselves. 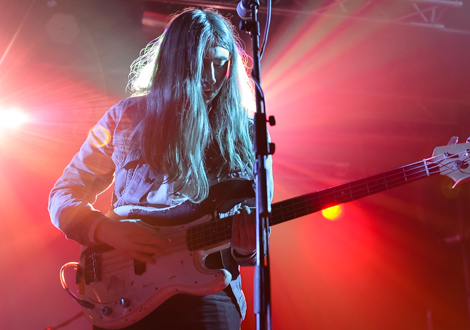 Proper Ornaments live at The O2 Academy
Also on the bill were Proper Ornaments who have become regular visitors to Liverpool over recent months having appeared with Crystal Stilts and Toy.