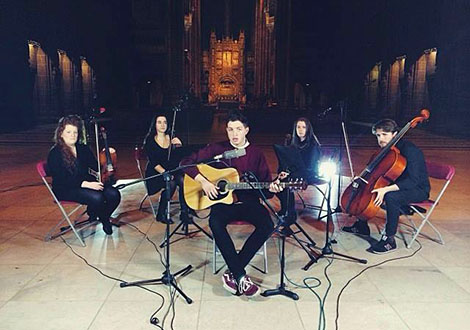 Not a lot of music has come out of Chester in recent years. Or ever. Maybe it’s its location, and its proximity to other cultural hotspots that draws the talent away, with the gravity of the Liverpool music scene taking the spotlight away from any acts that do try and break away from Chester.
Whatever the reason, you’d struggle to think of many successful acts who have emerged from the city better known for its horse racing and Roman history. However, one man trying to buck that trend is singer/songwriter Ed Black, who having spent time learning his trade with GIT award nominees Ninetails, is sharing his personal, stripped back style with the world.
After releasing an EP and the well received single Find Time, Black is back with his latest offering of Stuck on Rewind, which was released on the 1st April (insert April Fools Day pun here).
The track, which was recorded in the cavernous space of Liverpool’s Anglican Cathedral, sees Black at his most stripped back with an almost vulnerable honesty.
Lyrically, Stuck on Rewind is a song of heartache and pain, a feeling which you can hear in Black‘s emotional, tortured vocals, which alongside the addition of a string quartet gives the song a real sense of melancholy, as you feel Black‘s heart breaking with every word. The string section envelopes the bareness of the vocals and acoustic guitar, and in parts are strangely uplifting.
Overall the track is much rawer then Black‘s previous efforts such as Find Time, showcasing his talents and potential as a confessional songwriter.
After you’ve heard it once, Stuck on Rewind is sure to be stuck on repeat.