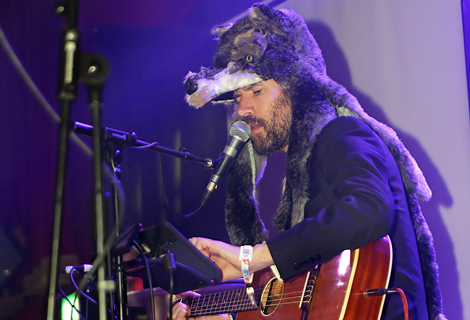 Win tickets to weekend of music and festivities in the Baltic Triangle as Getintothis‘ John Milburn looks over Summercamp 2014.

It feels like every time you walk through town lately, there are fellas putting out or taking away those temporary crash barriers used at events. We’ve had the Mersey River Festival, the Giant Spectacular then Pride and before we can draw breath Summercamp is back.

This indoor festival held at Camp & Furnace has wisely moved away from the crowded Bank Holiday weekend it occupied last year. The glorious weather combined with a range of outdoor stages on offer at LIMF and not to mention sharing a weekend with Creamfields failed to aid ticket sales nor helped the venture stand out in the super-crammed Merseyside music scene. That said those that attended last year gave it solid reviews while sadly none described it as rammed.

The move to earlier in the month is great news as not only does the fella who rents out those barrier things get to spread his workload out throughout the summer but music lovers in the city avoid having to make such tough decisions. With some superb bookings and typically strong food offering this year’s Summercamp has every chance of achieving its potential to become a real fixture in the regional music calendar.

Summercamp 2014 kicks off on Friday August 15 with Super Furry Animal, Gruff Rhys showcasing the best of his multimedia project American Interior. One of the most gifted and creative writers this island has produced is well worth checking out.

Deep Shit – the record label, club night and radio show curated by Jack Savidge of Friendly Fires and Edwin Congreave of Foals – will play an extended set in Blade Factory.

On Saturday August 16, Doves frontman, Jimi Goodwin headlines in Camp. Jimi, fresh off the back of his critically acclaimed solo album Odludek brings his distinctive melodic baritone to Liverpool.

In the Blade Factory, former Liverpool head Dauwd who is attracting praise from across the industry for his own particular brand of ambient electronica will bring the event to a close.

All four gigs are individually ticketed so you can mix and match as you please – both shows in Camp are priced £12.50, while the Blade events are £6 advanced (£8 on the door). But we’ve teamed up with organisers to give a pair of passes to both nights events – just answer the following questions, tweet us @Getintothis and add #GITSummercamp

What are the staff at Butlins more popularly referred to?