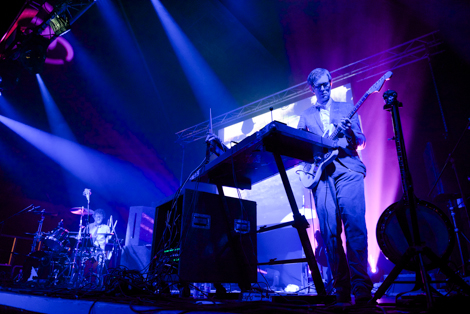 A rollercoaster of a finale eventually comes good, as Getintothis’ Jamie Bowman finds retro-futurists Public Service Broadcasting channelling the spirit of the Battle of Britain on Day Three of Sound City.

It’s been a problematic venue during this year’s Sound City but the Black E nonetheless has been a pleasing destination for all those seeking out something slightly more sludgy in this year’s fare.
Nottingham’s Kogumaza are tonight’s opening treat and they present a mesmeric master class in dense fuzzed-out psychedelia driven by the wonderful cyclical pounding of a drum kit whose cymbals are there only for decoration.
It’s propulsive, groovesome and full of gradual shifts of tempo and full marks to the wah wah infused cover of the Beatles’ I Want You She’s So Heavy during which Kogumaza summon up the late 60s thunder of Blue Cheer to dizzying effect.
Over at EVAC, Doves frontman Jimi Goodwin is trying to convince a loyal and sizable crowd that he can pull off the solo thing despite the fact that fellow Mancunians Elbow seemed to have stolen his bruised everyman credentials.
To his credit Goodwin is full of the bonhomie that made Doves such a likeable group but there’s a feeling that he hasn’t quite got the star quality to come out of the shadows and recapture the anthemic likes of There Goes The Fear and Pounding.
Folk stomper Oh! Whiskey sees Goodwin channel the spirit of John Martyn but it all seems a little desperate when compared with his excellent renditions of Doves favourites Last Broadcast and Snowden. 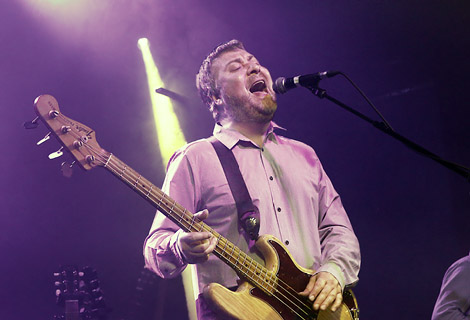