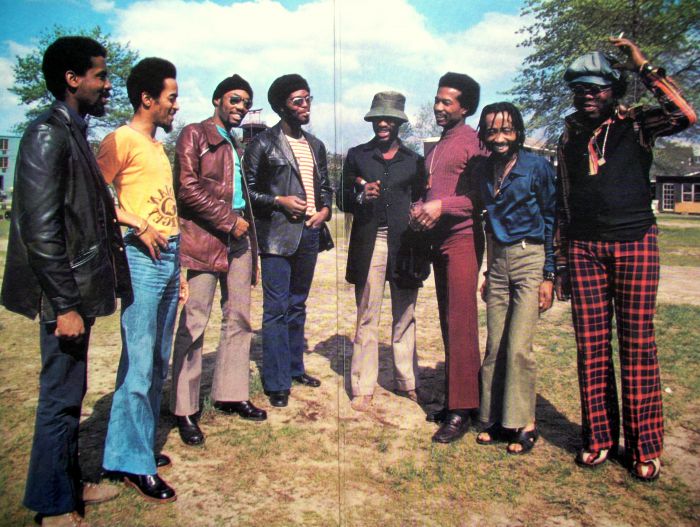 Cymande are to play a super-rare gig in Manchester

As the core of London’s cult funk outfit prepare for their first outing together in just under 40 years, Getintothis’ Josh Ray reflects on Cymande’s unique and lasting legacy.

Formed in 1971 by Patrick Patterson and Steve Scipio, Cymande melded calypso rhythms with UK rock and state-side soul as they began to develop a sophisticated strain of deep funk, which they themselves describe as “nyah rock”.

Bringing together a number of like-minded Caribbean musicians including Sam Kelly on drums, Mike Rose on tenor sax and flute, Derrick Gibbs on alto-sax, Pablo Gonzales on percussion and Adrian Reed on keyboard amongst others, Patterson and Scipio named their group after the calypso word for Dove and began spreading the message of peace and love the bird represents.

Immediately showing themselves as a force to be reckoned with, their self-titled debut LP featured classics like The Message, Dove and Bra and although their follow up Second Time Round made less of an impact it is widely credited as being one of the first albums to attempt a reggae/jazz fusion. The original group’s third and final record saw them regain form with hits like Brothers on the Slide and The Recluse before they split at the end of 1974. An offshoot of the original group reformed in the early 80s for one last flurry; resulting in the quirky, disco oriented Arrival, released on the prolific NYC-based Paul Winley Records.

Although they enjoyed a cult status in the early 70s and were widely celebrated by rare groove aficionados across the world, Cymande didn’t see any real commercial success until the early 90s when hip hop producers started raiding their back catalog, using it as the base for platinum selling records like when the Fugees sampled Dove in the title track of their second and final album, The Score.

Considering the original group haven’t toured together since garnering this newfound attention, this rare string of live shows is most certainly not to be missed. You can catch notorious nyah rockers in Paris, London, Dublin or Manchester.

Tickets for their October 10 show at Manchester’s Band on the Wall can be found here.