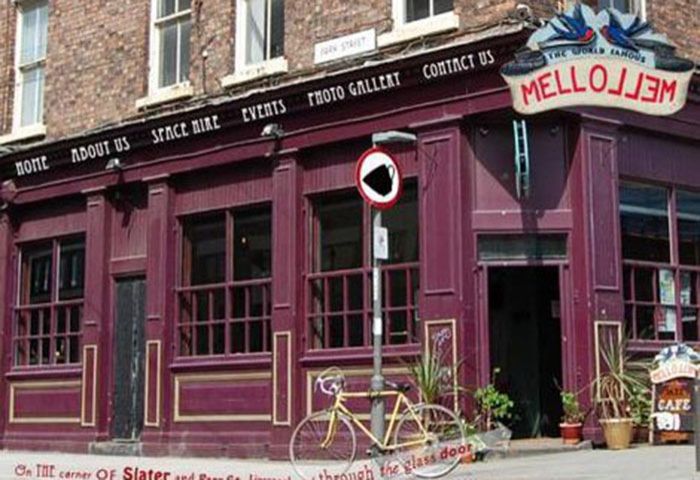 Liverpool independent institution Mello Mello announces it is to close with immediate effect.

Sad news has reached Getintothis HQ this evening with the announcement that Mello Mello is to close with immediate effect.

As previously reported, Mello Mello tenants and artistic residents were keen to fight on and spread the grassroots culture brand in Liverpool after news arrived that their campaign to keep the venue had failed.

After months of donations from the community, the Slater Street venue was sold to an unnamed source after the receivers received a higher bid than those who had been campaigning to keep it.

It goes without saying, that Getintothis, rates Mello Mello as highly as any other venue in Liverpool.

While providing some of the finest music and entertainment offerings the city has to offer, it is Mello’s ethos and it’s staff’s fierce independence which ensures there’s quality and an integrity behind the business which ultimately made it a venue worth fighting for.

We love it so much, it became our second home for six months while launching the GIT Award, with all the Liverpool-based judges meeting regularly – enjoying the fine food, drink and entertainment the cafe has to offer.

While in 2012 we named it our regional venue of the year for it’s offbeat theatre, Pete Bentham‘s Free Rock & Roll nights, the Used Vinyl gig series, stand up comedy, open mic poetry and a whole host of others reasons far too long to list.

Read our reflection on Mello Mello’s closure plus our top music moments here.

Mello Mello tenants have today issued a statement to say they will continue to ply their trade in the city but have yet to reveal what their future plans entail.

A press release confirmed the news, saying: ” To our wonderful community. It is with great sadness that we must announce that as of Monday 22nd September 2014, MelloMello CIC closes it’s doors and ceases to trade from it’s Slater Street home.

“Despite our best efforts we have been unable to meet the huge increase in business rates imposed on us two years ago, and have battled the financial difficulties that several burglaries and the ever-evolving fabric of the city centre have incurred. We are deeply saddened to be closing our doors, but also truly proud of what has been achieved within these walls.

“MelloMello began life in 2007 as a completely volunteer-led organisation, in a derelict space, and has grown organically through the hard work of it’s staff and the community into a catalytic creative hub, a grassroots cultural monument, and a welcoming and warm environment, brimming and buzzing with energy, passion, art, music, dance, comedy, food, drink, laughter and love.

“We thank our amazing staff, for everything they do, their talents and eccentricities, the wonderful support network they have built up, and the welcoming environment they provide. We thank every single creative individual who has walked through our doors and given us beautiful, raucous and thought-provoking art and performances. And we thank you, the community of Liverpool, for whom we endeavoured to provide such a place, for your fantastic support, the contribution of your own creativity and many wonderful characters over the years. You have all helped to create something truly unique.

More on this story as we get it.