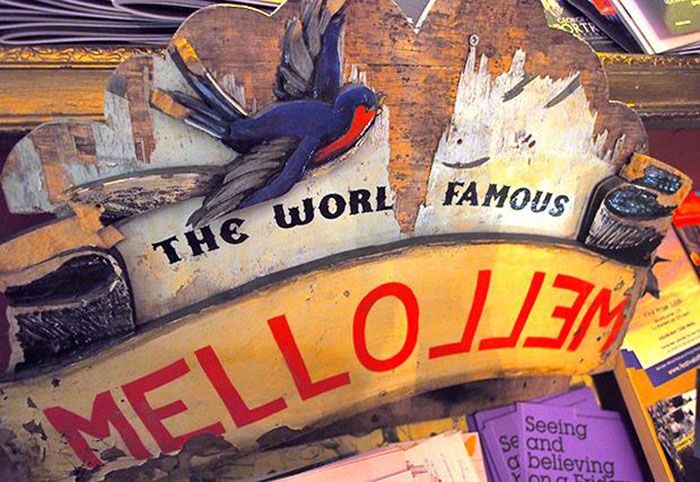 Mello Mello meant a great many things to a great many people. But everyone who passed through it’s doors will have felt a shared sense of happiness. It was that kind of place. Not in a faux hippy, try-hard kinda way, just a place where all of Merseyside’s community could come together, to do pretty much what they wanted, when they wanted.

Whether it was partying hard, gathering one’s thoughts for a moment of reflection or simply snaffling one of their corking lasagnes, Mello Mello was a place which embraced everyone.

From the lunatics to the librarians, the rock & rollers to the ragtimers, the diehard punks to pisshead pillocks, the burlesque dancers to the poetic chancers, to the naff buskers to virtuoso instrumental masters, the improv thesps to the knitting classes experts, tattooed belly-dancers and jazz cigarette smokers, 80 pence gig goers to Japanese psych-wankers, record fair rakers or taking a break tea-time shoppers, silent movie enthusiasts or noise-musik droners, Blind Monk Trio‘s and lycra-sporting drummers, electronica noodlers to strippers in the nude, real ale drinkers or chocolate brownie makers, those who just popped in and those who worked and lived upstairs – Mello Mello was a home from home for many and more.

There’s quite simply too many memories we’ll take away from Mello Mello since the latest crop of creatives took over – we wish Rob, Laura, Jo, Adam, Tall Paul, Howard, Simon and the many staff who made the place such a pleasure to frequent; all the very best with their next venture – in the meantime, with the waft of those disgraceful toilets dimming in our recesses, here’s 11 magnificent Mello Mello music moments (in no particular order) – and a Getintothis ‘cheers, here’s to the next one‘…

1. If Mello’s spirit was summed up in one evening, it was the 10th birthday party of Merseyside independent electronic label Upitup who presented the first of three skewed nights of raving in the Slater Street cafe. Ergo Phizmiz laid on his whacked out electro-opera Gargantua while the likes of The Wyrding Module played undulating and slightly disconcerting wonky beats for an enthusiastic set of dance heads. More here.

2. Mello had an affection for leftfield, progressive music and so it was a perfect fit when Minion TV started their New Paths evenings championing post-rock, alt-rock, math-rock, avant-rock, rock-rock and just about any other form of music which happened to rock. And Stars Collide opened up one of those early showings but we discovered a particular Mersey favourite in the shape of Muto Leo – who despite being ridiculously like Foals/Youthmovies – were also ridiculously good. More here. And here.

3. From Cracker to Taggart, every single Irvine Welsh character to Rab C Nesbitt and Gordon Strachan, every fucker likes a sweary Scot with a big heart. RM Hubbert is one such sweary Scot – and he laid his heart and soul bare in Mello with a sublime set concerning profound depression, uplifting asides and simply breathtaking music. More here.

4. Acid Mother’s Temple are almost the definitive Mello band. Ramshackle, far out, completely potty and slightly nomadic – you never know what’s going to happen, or who’s going to turn up – but you can bet your last vegetarian stuffed mushroom its going to be tasty. They played Mello several times but when they crashed landed with 42 different brass instruments alongside fellow loons Barberos and an incendiary Carlton Melton it was seriously special. Apparently the guys in Santa Chupitos asked them to turn the rocket launcher’s down. More here.

5. Each Sound City promises pop up overseas showcases displaying the finest sonic riches from far off lands. Some work, some don’t – one will go down as truly memorable. When you hear the band names Kamp and Plum you don’t immediately think, ‘the future of rock & roll’. It’s pretty hard to imagine them across a massive poster at Glastonbury, anyways. And while that day is yet to arrive, the ‘Don’t Panic, We’re From Poland‘ showcase at Mello was an absolute joy. Kamp reimagined Cut Copy but were ten times better while Plum nearly took the roof off with their bowel-shuddering wrecking-ball riffs. More here.

7. One of our personal favourites unfolded in October 2012, when the oddball genius of GNOD unleashed tantric death disco combined with ritualistic shamanic grooves as the lead singer hot-stepped it around the room with a small book of lyrical spells. Everyone looked terrified and amazed. It was completely amazing. Earlier, Ancient Ocean played Ash Ra Tempel-inspired drone and Expo 70 completed proceedings by sitting cross-legged in the middle of the stage as he sent everyone to oblivion with a looped out tidal wave of noise. Incredible. More here.

8. Another incredible evening saw Italian’s Satelliti bring new meaning to Mello’s Jazz Cafe moniker as the keys/drums duo played elongated instrumental epics which were as deft musically as they were hypnotically captivating. It’s a contender for our gig of 2014. They play Psych Fest this weekend and we implore you to go see them. More here.

9. There’s a pattern emerging here, Mello Mello’s gig could be unremittingly loud. Another case in point was Teeth Of The Sea‘s triumphant return in 2012. Armed with Your Mercury and the early fruits of MASTER they proceeded to make noise akin to a Zulu tribe setting off car alarms assisted by a Trojan war-band. It was so good we almost gave it gig of the year. But then we saw Swans and they flattened Manchester. Anyways, Mello did loud. Very well indeed. More here.

10. Like Pete Bentham‘s Free Rock & Roll nights or Anti-Pop‘s maniacal punk offerings, Mello created music communities within the music community. Another such offering was the Used Vinyl lot who popped up one Spring with the idea of holding a vinyl swap shop alongside gigs and to finish an indie karaoke session. Puzzle, Elle S’appelle, Voo, Down & Outs, Loose Moose String Band and loads more played one gig a month and a lot of people gotten together for a lot of good times. What could be better? They even dished out a home made collector’s vinyl series and badges and stuff. Old school, enough? More here.

11. If there’s one band who will carry on the legacy of Mello Mello; spreading the good times, communal spirit and all-inclusive vibes, it’s the Harlequin Dynamite Marching Band. They played Mello last Christmas with Emily of Stealing Sheep‘s former charges The Faves plus the Dead Hedge Trio – both former Mello regulars (more here). But it’s the Dynamo’s who will carry on the Mello charge. Much of this collective have had some hand in Mello Mello – be it working behind the bar, sound tech-ing gigs, looking after the recording studio or simply being a regular patron – they’re Mello to the core. Having began as something of a gorilla outfit, firmly putting fun over tunes, they’ve honed their skills and are now a fully fledged, serious proposition, playing gigs and festivals all over the land – even incorporating a DIY costume and lightshow into their performances.   They’re bloody ace and guaranteed to put a smile on the faces of anyone in attendance. With all that jazz, they’re Mello through and through.