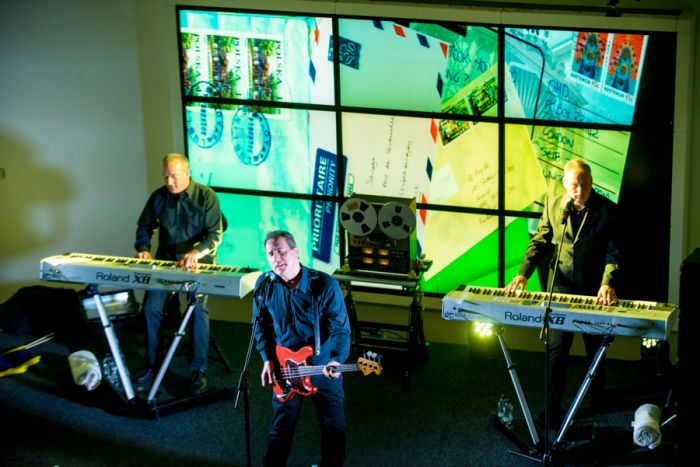 In the unique setting on the banks of the Mersey, OMD perform fan favourites, classics and a raft of tracks from cult classic, Dazzle Ships, Getintothis’ Michael Booth soaks up a titanic set.

The atrium of a museum may not seem a natural place to crank up the amps for a rock gig but on Saturday and Sunday night OMD made the Museum of Liverpool their own, raising the roof and setting Ming vases rocking with two benefit performances which saw all proceeds donated to their hosts.

Getintothis was there on the opening night to doff our hats to the band for such a magnificent gesture of support and naturally to take in the tunes.

The album in focus for these two nights was Dazzle Ships, released in 1983, to a critical mauling and an air of public indifference. The shift in direction from their previous album proved an act of commercial suicide but the band remained proud of the work and over the years it has become a firm fan favourite which has also undergone critical reappraisal.

The album’s concept was taken from the painting Dazzle-ships in Drydock at Liverpool, the dazzle description relating to the distinctive style of camouflage employed by WWI military ships, consisting of geometric shapes in contrasting colours, jaggedly intersecting each other to confuse the enemy as to the size and distance of the ship. With OMD’s long term artwork collaborator Peter Saville extrapolating this idea for the album sleeve the band embraced the concept at an early stage to create something which defied easy categorisation, featuring a deliberately incohesive mix of pure pop songs, musique concrète, experimental sampling and avant garde tracks. 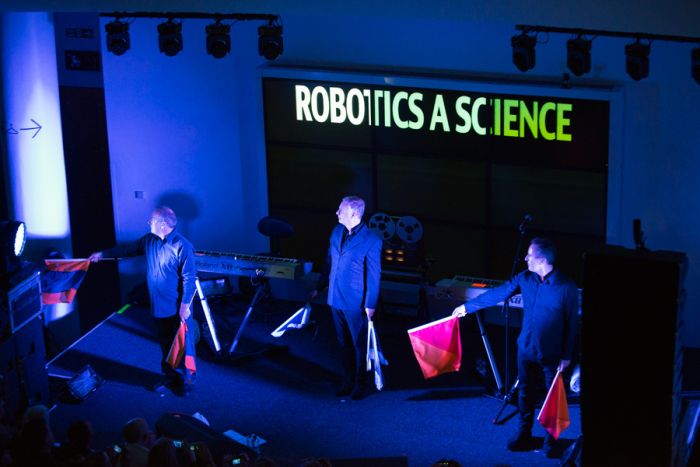 The album has a very loose theme of industrialisation and globalisation with a socialist flavour in its iconography similar to Depeche Mode‘s Construction Time Again which was also released that same year. Here on the Liverpool waterfront with the Museum’s own architecture almost able to slot into the geometry of the Dazzle Ship pattern, it almost felt like the aligning of stars as we gathered to celebrate this lost classic.

Two pieces of musique concrète from the album announced the arrival of the band, the sound collage Dazzle Ships Parts II, III & VII and the sample laden ABC Auto – Industry. For the latter each band member raised and lowered flags in time with the robotic rhythms, assimilating themselves into the music in an enjoyably theatrical opening spectacle.

The band then took to their instruments and continued the maritime theme with the epic Sealand, its tortured crashing synthscapes and achingly simple lyrics conveying a seafarers longing for family back home. It is one of OMD’s finest tracks, delivered with a real sense of desolation by Andy McClusky. The melancholic mood continued in the form of Messages, OMD’s iconic hit single from the early days.

We then changed gear completely as the band returned to Dazzle Ships and served up one of its finest pop moments Radio Waves with its propulsive bass line, uplifting synth motif and catchy vocal refrain was performed with a level of gusto that a teenage outfit would’ve been proud of. We remained with Dazzle Ships for the next track too as McClusky reached for what he jokingly referred to as the ‘banished six string instrument’, the guitar which they forbade themselves from using in the early days. Genetic Engineering is another hi-energy number with a rollicking sample and sequencer line at its heart, with a rowdy percussive guitar layered over the top. It may not have been much of a success as a single but it went down a storm here.

Jumping 30 years forward in the canon, the breezy synth line from History of Modern drew cheers from the crowd demonstrating the enthusiasm of the fans for OMD‘s new material – not something every resurgent band enjoys. And as quickly as we’d been brought up to date we flew right back to the beginning with a rare treat in the form of Julia’s Song a notable album track from their debut.

A big beat take on the ethereal Souvenir followed with Paul Humphries on vocal duties before the majestic Joan Of Arc (Maid of Orleans) sent a shudder through the audience, not to mention the walls of our normally sedate confines. How OMD managed to craft such an amazing pop song from so many disparate non-pop elements is a true testament to their brilliance and represents the band at their forte.

OMD have always worn their influences on their sleeve and their next song 4Neu could not be a clearer nod, having been written as a tribute to the German Krautrock band Neu! This rarely performed track was released as a B-side and was one of the evening’s highlights to hear its heart breaking piano melody ringing out against McClusky’s breathy vocal. A fine tribute indeed.

The intimacy of these gigs and the limited number of tickets available ensured the majority of those present were true devotees of the band so OMD could afford to push the boat out with the track selection. So not only did B-sides get a look in but also lesser known album tracks. International was one such example, an epic song from Dazzle Ships which demanded Andy McClusky’s full vocal dexterity with its infinitely delicate opening to a truly powerhouse crescendo which elicited an applause all of its own from the crowd. 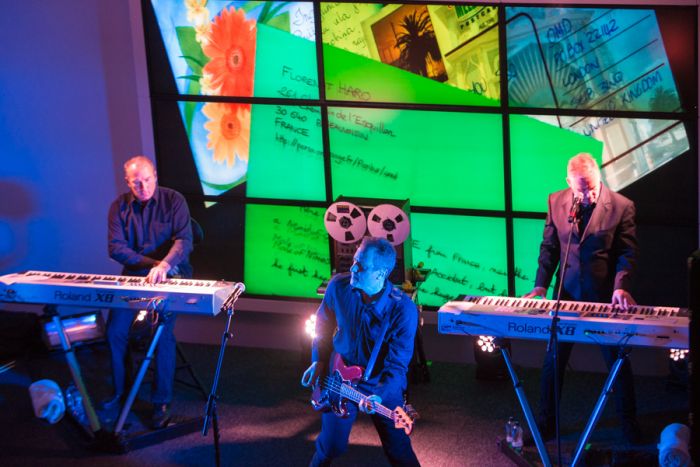 It is amazing how durable McClusky’s voice has remained over the years and combined with the sheer amount of physicality he puts into every performance he is a natural focal point for the band, even if he won’t be appearing on Strictly Come Dancing any time soon. Sadly the group have been reduced to three due to the health problems suffered by Malcolm Holmes after his collapse from heat exhaustion on the Canadian leg of their English Electric tour, so all the percussion was provided by backing tracks.

One of English Electric’s finest moments, Metroland carried the crowd along during the closing stage with its crystalline sounds and optimistic melodies, before we ascended even higher with the choral magnificence of Sister Mary Says. If there were any paintings still hanging on the walls by this point they were surely dislodged by the vibrations of Enola Gay launching into full flow as the band gave it full pelt for their final number, with even the museum attendants on the sidelines getting in on the act.

Once the considerable applause died down the band returned to us for two final numbers, the irresistible Electricity, brimming with youthful energetic charm, and Romance of the Telescope, a song which the band collectively regard as their favourite. This slow tempo track with its languorous synth lines and almost hymnal vocal proved a perfect play out for what was a finely honed and passionate performance that will live long in the memory of everyone who was lucky enough to be there. 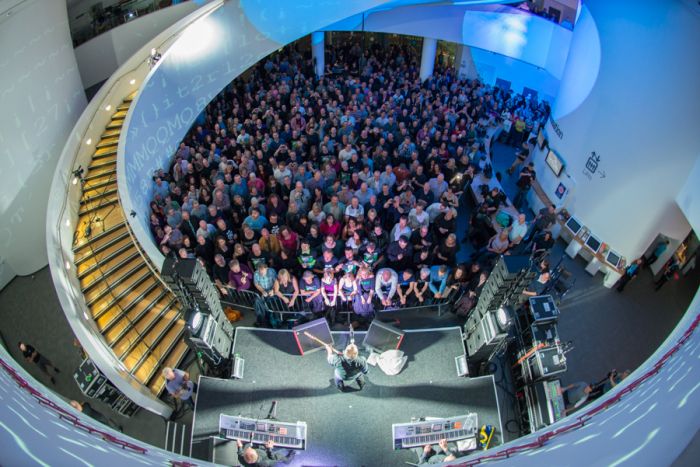