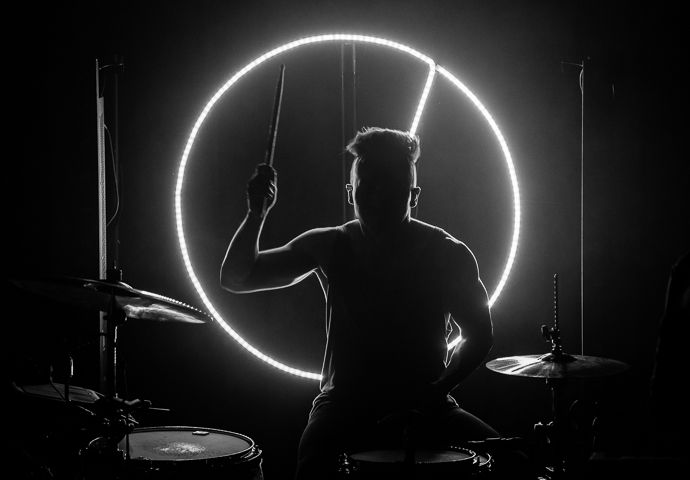 As Scottish synth-pop starlets treat the Kazimier like a sold out stadium, Getintothis’ John Gibbons dances long into the night.

Scottish synth pop is in. Well, sort of. Chvrches are doing well anyway. We got a double helping of some of the next lads in line at the Kazimier on Friday night, and most enjoyable it was too.

The Wild Curve came on first to a sparsely populated Kaz, but with plenty showing encouragement down the front. Standing up drumming is also in at the moment, there’s loads of that, but rarely have we seen it performed by a man in a copper leather jacket. The restrictive looking garment is wisely ditched a few songs in as the band relax into the set. The band claim it was their second ever gig, which we are always sceptical about. Usually it means ‘It’s our second gig since we sacked our bass player, changed our name and all got new haircuts’, but whatever they have been up to they are certainly well rehearsed. The set is in danger of drifting into sameyness however, until a belter of a closing track ensures they finish on a high.

After a short intermission in which the DJ manages to play Shake it Off by Taylor Swift twice (it maybe a banger lads, but still) we get Prides, by which time the room has filled up nicely. They immediately make an impact, opening up with the title track from their excellent EP The Seeds You Sow. There is loads we love about them immediately; we love a band who sing in regional accents in a non forced, very natural way. We love a band that treat a smallish gig as if they are playing Wembley stadium. But mostly that they are unashamedly a pop band with a wonderful ability to write great melodies with driving beats and ‘tops off’ choruses.

They are more popular than we realised too, there were plenty of Prides t-shirts on display and people seem to know all the words to songs such as I Should Know You Better already. It’s the new songs they have written that impress the most though, which bodes very well for a Prides album in the future. Afterwards, our reviewer was meant to go home but ended up going out. There are probably other reasons for this, most notably lack of will power, but also think this is the kind of effect the band have on you. They energise you, they fill you full of life and make you want to dance into the night. You can’t just go and watch Prides and then go home. They didn’t do much for the hangover the next day though, but they can’t do everything.