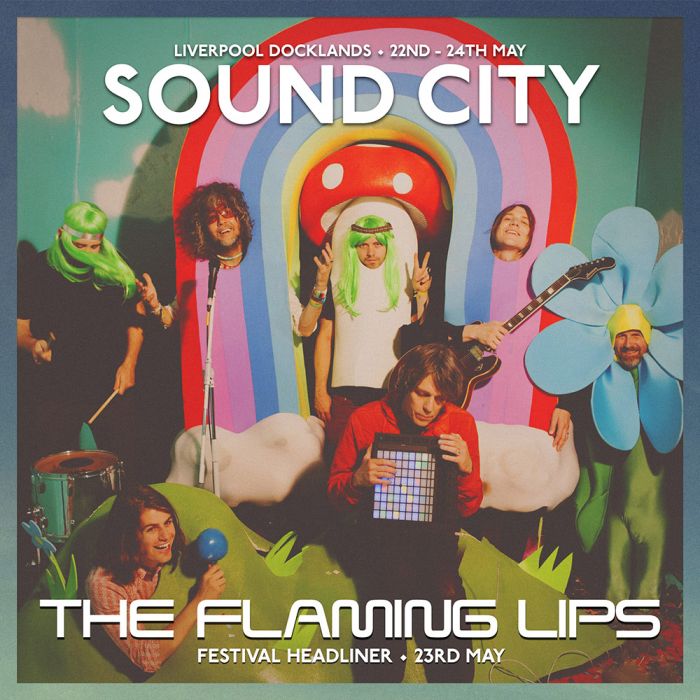 The Flaming Lips are to bring their acclaimed live show to the banks of the Mersey, Getintothis’ Paul Higham reports on Sound City’s latest headline act.

Following the recent news of the relocation of Sound City to Bramley Moore Dock and the announcement of Belle and Sebastian as Sunday night headliners, Sound City have pulled off another major coup.

Renowned psychedelic experimentalists The Flaming Lips have been confirmed as Saturday night headliners for its 2015 incarnation.

Legendary is a much over-used term in popular music journalism, yet if any band is befitting of the term it surely is The Flaming Lips. Formed in 1983 in Oklahoma City, the band are characterised by their layered and textured psychedelic sound and are perhaps best known for their elaborate live shows, stage settings and light shows.

Past Flaming Lips live shows have featured people dressed in animal costumes, large amounts of confetti and singer Wayne Coyne being propelled into the crowd inside a man-sized plastic bubble. A Flaming Lips show has to be seen to be believed, so much that in 2002 Q magazine named The Flaming Lips as one of the 50 bands to see before you die.

With the recent Brett Gregory film Liverpool: Beyond The Beatles having considered the artistic legacy and influence of The Beatles on Liverpool‘s contemporary music scene, it seems appropriate that The Flaming Lips be included as a headline act for the newly revamped Sound City.

As if to highlight the clear influence of The Beatles on their sound, the band has recently released With a Little Help From My Fwends, a collaborative cover version of Sgt. Pepper’s Lonely Hearts Club Band. In this context it seems appropriate that the band should return ‘home’ to Liverpool to headline 2015’s Sound City.

Sound City CEO, Dave Pichilingi commented, “We are delighted to have The Flaming Lips for 2015, a band we have wanted on the bill since our first year and a band with a massive connection with the city. We couldn’t have booked a better act to play at the beginning of our next chapter. It’s going to be an amazing spectacle on the banks of the Mersey. Unmissable.”

Early Flaming Lips music is sonically wilder and more experimental. Despite 1993’s commercial success of She Don’t Use Jelly and signing for a major label in Warner Bros. Records, the band, almost deliberately, eschewed commercial success.

Incorporating tape loops and strange sound effects into their sound this experimentalism reached its apogee with Zaireeka. Released in 1997 as a four-CD album, it was intended that all four CDs be played simultaneously to create a lysergic and truly quadrophonic sound.

Mainstream success really only came with the release of 1999’s masterpiece Soft Bulletin and its follow-up Yoshimi Battles the Pink Robots. Musically both albums presented a more accessible sound while preserving the lyrical pre-occupations of their forebears. Lyrical weirdness, covering philosophy, space, the universe, and science fiction, was married effectively to more traditional and catchy song structures.

Latterly the band has moved away from accessibility and back into denser and ominous territory. 2009’s Embryonic was followed by 2013’s The Terror, the latter being bleak, often impenetrable and filled with experimental noise. Thematically it follows familiar themes to its predecessors but sonically offers something different.

Recent releases have also been noted for their collaborations and include a reimagined version of Pink Floyd‘s Dark Side of the Moon alongside Peaches and Henry Rollins and also Heady Fwends, a collaborative album renowned for a limited number of vinyl pressings containing the actual blood of some of its contributors.

With recent Flaming Lips festival headlining sets proving to be joyous ‘greatest hits’ occasions, we are no doubt in for a real audio-visual thrill next May.