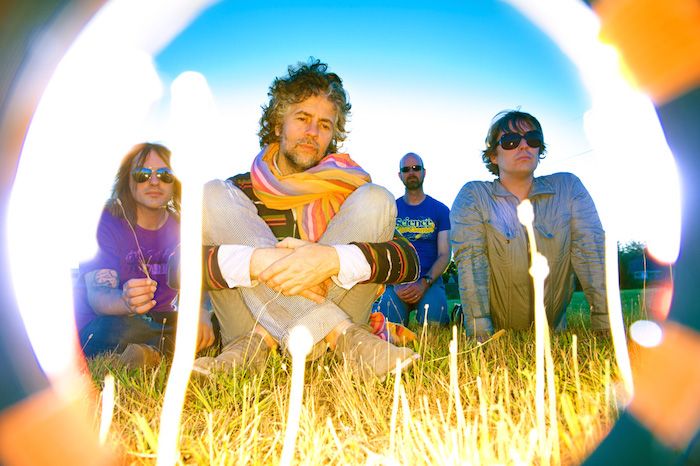 As the fearless freaks are announced for a special headline performance at Liverpool Sound City, Getintothis’ Adam Lowerson delves into their back catalogue to find their 10 best tracks.

The word legendary is bandied around far too easily when describing bands. Any band that releases a couple of hit singles, and lasts for more than just a few years usually end up being referred to as ‘legends’, when they haven’t really achieved anything out of the ordinary.

The Flaming Lips have never had a hit single, in fact only one of their tracks, She Don’t Use Jelly, has ever even reached the top 10 in the UK or USA. But in terms of pushing musical boundaries, exploring new ways of creating and releasing music, few bands in the past 30 years have had as much of an impact as Wayne Coyne and Co.

The Flaming Lips are true pioneers of sound, one of the most influential experimentalist bands since the original wave of psychedelia, and are still evolving today, over 30 years after forming in Oklahoma. They’ve released albums embedded into human skulls, released records that can only be heard by playing four discs simultaneously, and collaborated with artists as varied as Yoko Ono and Miley Cyrus.

Ahead of their headline performance at Liverpool Sound City 2015, we take a trip through their back catalogue and pick 10 of their best tracks.

Probably the most beautiful song about death you’ll ever hear. Arguably the band’s most well known track, it’s an uplifting yet melancholic piece of euphoric psych-pop. The lyrics convey a feeling of optimism and togetherness, making it a special moment of any live performance by the fearless freaks.

One of the stand out tracks from one of the Lips’ most critically acclaimed albums At War With the Mystics, The W.A.N.D sees Coyne at his cosmic prime. With his trademark sci-fi lyrics, warped vocals and a killer guitar riff the song is an explosion of sound.

The opening track of the album and one of the band’s biggest sing-a-longs, it tackles the issue of the power hungry and elitist world leaders while still managing to sound fun with its ‘yayayaya’ verses. Another anthem in the mould of Do You Realize?

Made up of layers of colossal drum sounds, glittering harp and woozy synths poured over Coyne’s emotion filled vocals, Race For the Prize is dreamy and celestial. The track was since made the official song of Oklahoma City Thunder, the group’s home town NBA team.

5. She Don’t Use Jelly from Transmissions From the Satellite Heart (1993)

The band’s only top 10 single sees them at their daftest and most fun with lyrics about a girl who butters her toast with vaseline and a man who blows his nose with magazines. They might sound the product of a lot of drugs, and to be honest they probably are, but they have a poignant message. We’re all freaks for some reason or another.

The surreal sci-fi lyric theme continues here with a song about a woman with a black belt in karate destroying the evil pink robots. The rest of the song however is probably one of the least experimental, with a soft, acoustic guitar laced with more dreamy synth to give a feel of gentle optimism.

One taken from one of their more recent studio LPs sees the Lips back to their freakiest, with musical mastermind Steven Drozd’s constant, almost krautrock drumming driving the chaotic fuzzy mix of screaming synths and guitars over Coyne’s faraway vocals.

This track sees the Flaming Lips stripped back (kind of) to basics, for their attempt (kind of) at a bit of a ballad. Delicate piano and acoustic guitar gently building towards a climax led by a raw, emotion driven guitar solo. Perfect.

9. Pompeii Am Götterdämmerung from At War With the Mystics (2006)

Drozd takes lead vocal duties on an epic journey through music. With cloud like synth lines, bursts of guitar and otherworldly vocals driven by enormous drums, the Lips sound truly intergalactic, and feels like a paean to one of their biggest influences Pink Floyd.

10. One Million Billionth of a Millisecond On a Sunday Morning from Oh My Gawd!!!…The Flaming Lips (1987)

This early track from the band’s second LP is at the complete opposite end of the psychedelic spectrum to a lot of the material people may be more familiar with. The raw, fuzzy guitars are reminiscent of the gritty psych sounds of the 13th Floor Elevators, and is a great example of the Lips before the multi-layered explosions of colour and sound were their trademark.