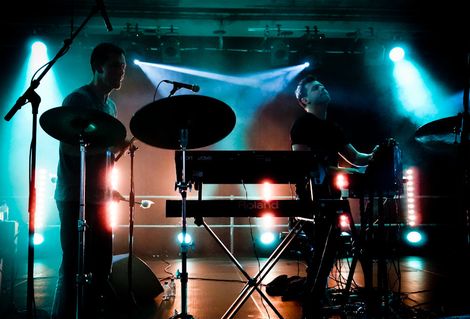 It’s been almost six months since Baltic Fleet won the GIT Award 2013 and were asked to support Yoko Ono at her Meltdown Festival. Getintothis caught up with main man Paul Fleming for a behind the scenes chat about Yoko, Sean Lennon, playing the Southbank Centre and what the future has in store for the band.

It’s been something of a whirlwind few months for Baltic Fleet.
Debut LP Towers immediately and rightfully threw them into the mix as one of Liverpool’s best and brightest groups.
Having picked up the beautifully avian-themed GIT Award 2013, the powerful electronic trio have gone from strength to strength.
Yoko Ono, having very generously offered the award winner pride of place on her own curated Meltdown Festival, gave the group a new platform.
Paul Fleming took time out of an increasingly busy schedule to grant us access to a little tour diary.
He discusses the buzz of playing at the world famous Southbank Centre, meeting the other-worldly, regal Yoko and how the future looks even brighter for this most industrious of groups.
We join Paul on the day of the festival. A big crowd awaits and nerves are jangling… 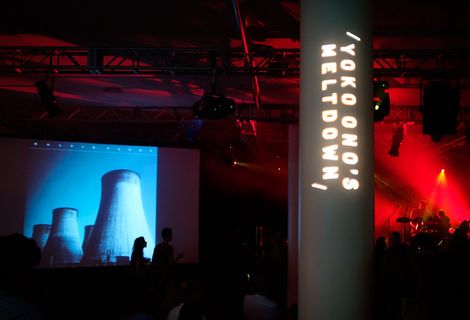 “We arrived down at the Royal Festival Hall mid afternoon. The Southbank Centre sits right on the Thames and is a real spectacle.
We were directed to stage to set up and sound check, the crew were great and it seemed like we had all the time in the world.
Our stage was set in the huge concourse that is open to the public, the setup was impressive. We’d heard that Yoko had just done a meet and greet with staff and crew and we’d missed it by minutes.
After sound check we were shown to the dressing rooms and had a bit of a tour around. The Southbank Centre is simply a sublime venue.
We took off then for a tour around the food market and a walk down the South Bank.
There was tonnes happening all around, it’s a cultural centre and very family focused, so it was a great vibe.
We took in the sights, the place sits next to the London Eye, Big Ben and the Houses of Parliament are on the opposite side of the Thames.
We were asked to play two sets; pre and post Yoko’s show.
The organisers asked if we could do an acoustic set then a rock set. As an electronic band that wasn’t really feasible so for that first set we did some of the more ambient Baltic tracks and some experimental improvisation.
The crowd was completely mixed in the first set from pensioners who were passing through to some Fleet fans who had especially made the trip.
They’re a clued up bunch in the Southbank though and I was informed the crowds are generally open minded and culturally educated, which probably added to my nerves.
With a well received first set behind us we headed back for the catering, set in a glass fronted restaurant looking out on said views. Still no hint of meeting Yoko.
The food was great and we were given our tickets for Yoko’s show in the main hall. Yoko’s set was preceded by a huge video screen showing a film of lots of close-up bottoms.
That might sound more than a little obscure (and it was!), but it was thought provoking in regards to ‘the norm’ and what is natural.
The show started proper with another film, a poignant one about Yoko’s life and her time with John.
The music kicked off with Yoko and a full band, Sean Lennon being the main orchestrator and sharing bass and guitar duties. They sounded great and Yoko is such an engrossing spirit.
We had to dive out with about 20 minutes left to get ready for our second set.
As we started in the concourse with one of our motoric tracks, Black Lounge, the crowd started streaming out of the main hall and into our show.
Thankfully a large chunk of Yoko’s crowd stayed and watched (and danced). We kept the energy up with other tracks from Towers and the second set was harder and more edgy.
The reaction at the end of the set was one of the best we’ve had and we sold a lot of albums on the night.
Afterwards we headed up to the aftershow and Linzi, who’d been our liaison all day (thank you Linzi!) took us to meet Yoko. 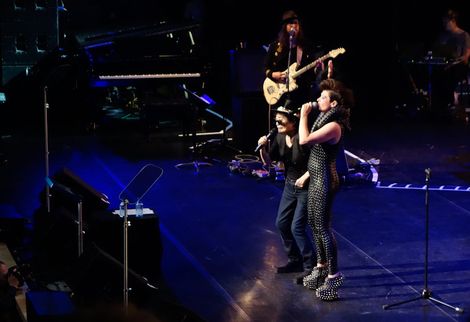 Yoko Ono proved no slouch, aged be damned, at Meltdown Festival
Yoko was amazing, very softly spoken and told us how pleased she was that we’d come down representing Liverpool and the award.
She seemed genuinely enthused about our part there and the link back to the city through John which was more than humbling.
The occasion had a strange effect on myself and Macky (Baltic bass player and best friend); with Yoko sitting down to greet us we both ended up on one knee in front of her, it was like we’d met the queen.
From a cultural point of view I guess we had!
We met Sean Lennon and had a quick chat before he was off to talk to someone more important than us.
My final comment to him was “me Dad knew your Dad“. When I reflect on that it sounded totally naff but he didn’t understand anyway. I think he thought I was talking Spanish and repeated ‘mi dad?’ 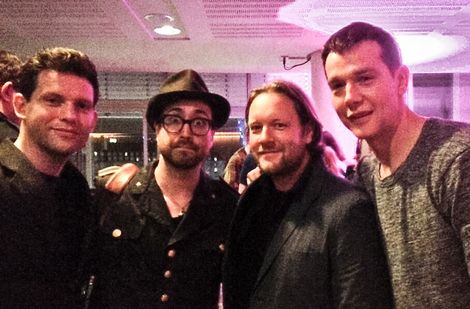 Baltic Fleet and Sean Lennon defy the language barrier for this photograph
We headed home after that in the van through thunderstorms, getting back up north well after 4am. It was light when I got home.
Two hours after going to bed my one and three year old children were clambering on me awaiting news on the night before; rock and roll!
Since winning the GIT Award 2013, things have gone really well.
On the live front we’ve played a string of dates with Public Service Broadcasting including their sold out homecoming London show, as well as supporting Hookworms for the Psych Fest at Blade Factory.
Playing with Mount Kimbie at Sound City and FestEVOL was a massive highlight too.
We’ve managed to take the Baltic sound further afield mainly in London but also to Newcastle and the Midlands.
There’s been a lot of local and national press and interviews. We’ve been interviewed by the likes of NME and The Guardian.
The BBC have been playing lots of tracks from Towers on some of their biggest shows and documentaries too.
BBC6 Music have been massively behind the record and have continued to play our tracks alongside Dave Monks, Radio 2 and XFM.
All of the support, well wishes and airplay has been overwhelming really.
I’m currently in the middle of remixes for Public Service Broadcasting and Aviator after remixing Tea Street Band, Eva Petersen and the Red Suns already this year. I’ve also done a bit of DJing on the side!
When it comes to the future I really want to sit down and put down some new material now though.
I’ve had that creative itch for a while and have a few demos and lots of ideas for tracks.
We’ve been concentrating on the live show since Macky and Mark McKenny (guitar) joined me in March, but my real passion is the creative process and I’m happiest when I’m in my home studio making sounds and tracks.”
All photography courtesy of Blow Up Records.
Further reading on Getintothis:
GIT Award 2013: Baltic Fleet: To be involved and win will always stay with me
The GIT Award 2013 report, reaction and review from Leaf Tea Shop, Liverpool.
GIT Award 2013 winner announced as Justice Collective win Inspiration Award
GIT Award 2013: picture gallery featuring Baltic Fleet, Nadine Carina, Conan, John Heckle, Tyler Mensah and more.
GIT AWARD 2013: Nominee profile – Baltic Fleet
GIT Award 2013: Jayne Lawless on making the Award
GIT Award winner Baltic Fleet to play opening night of Yoko Ono’s Meltdown