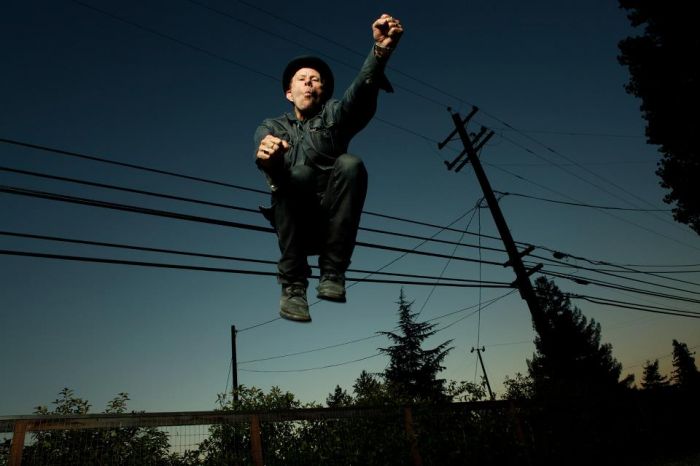 Getintothis’ Shaun Ponsonby takes a distinctive journey into the cult world of Tom Waits to celebrate 30 years of Rain Dogs.

Listening to Tom Waits for the first time is a daunting experience. What is he doing, exactly? What did he say? Does that really count as a melody? Does he need a cough drop?

But there’s something about Uncle Tom that keeps you intrigued, and behind the grotesqueness of his presentation lies some real beauty. It’s a bizarre dysmorphic way of making music, and very few have maintained that balance for so long.

Then we discovered that by the 1980s he had cleaned up his act, but somehow got weirder.

1983’s Swordfishtrombones was unprecedented. A complete left turn, the last thing anyone expected. This sounded nothing like the guy who came before, hunched at his piano howling about a Bad Liver and a Broken Heart. This was filtered through Captain Beefheart. Except whereas Beefheart is someone we can only really listen to out of interest, Waits is never truly inaccessible.

But for our money it was only warming up for its follow-up, 1985’s Rain Dogs. It seems as though critics and fans are split 50/50 on which of these is the superior record. Let us arrogantly put an end to this once and for all: it’s Rain Dogs. Although its predecessor was a breathtaking experiment, most of the songs feel like just that – an experiment. The songs on Rain Dogs, however, are far more realised and manage to mould the crazy avant garde experimentation of Swordfishtrombones with a greater emphasis on tunefulness.

Take the album’s best remembered song; Downtown Train. It’s probably the most “pop” he’s ever been, even if we do use that term loosely. And yet the general populace don’t remember it as a Tom Waits song, they remember it as a hit by Scottish-when-he-wants-to-be irritant Rod Stewart.

Like 99% of Stewart’s post-Faces material, his reading of Downtown Train is bloody awful. Cleaned up with sheen, completely lacking the grit and edge of Waits’ delivery. But the melody is perfect for AOR playlists. The same could be said about Hang Down Your Head or Blind Love. A more radio-friendly voice easily could have made them hits.

And that is the common complaint you hear about Waits. “Great songwriter, terrible singer”. We’d like to counter this. Listen to the difference between Stewart’s Downtown Train and Waits’. It’s immense. Rod might sound better in a more traditional sense, but in no way does his voice sound like the character in the song. Waits sounds like a drunken vagabond. He sounds like the kind of guy who would “climb through the window and down the street” rather than simply using the door. Rod sounds like he is – perhaps deservedly – more likely to fall out of the window and seriously hurt his ankle.

Despite this, very few of the songs feel explicitly like they fit within those comfortable genres. Waits is a junkyard artist, and I’m not convinced all of the instruments listed are accurate. As the man himself said in a promotional interview for the record:

“If I want a sound, I usually feel better if I’ve chased it and killed it, skinned it and cooked it. Most things you can get with a button nowadays. So if I was trying for a certain drum sound, my engineer would say: ‘Oh, for Christ’s sake, why are we wasting our time? Let’s just…sample something and make it bigger in the mix, don’t worry about it.’ I’d say, ‘No, I would rather go in the bathroom and hit the door with a piece of two-by-four very hard’.”

It may shock you to that we here at Getintothis were pretty weird kids. There wasn’t really anything on the charts that interested us; some of us found the indie bands of the day intolerably dull, pop seemed to be at a nadir, there was something about hip hop that hadn’t yet grabbed a couple of us, maybe we found electronic dance music pretty hollow. It was perhaps much more common for some of us to delve into music of yesteryear than that of our youth.

Maybe part of our affection for Waits is that he claims the same. He got into Dylan and the Stones later in life, the same way some of us got into Eminem later in life. None of the music he has ever made has fit in the time he’s made it. Listen to any other album made in 1985. It don’t sound like Rain Dogs.  But this is where he truly started making music that didn’t fit anywhere. It sounds like the past and the future at the same time, and to this day nothing sounds quite like Rain Dogs.

It was Tom Waits (and this album in particular) who made us think about music in a different way. All these rules about melody, arrangements and instrumentation were obviously bullshit. There are no rules in art.

We’re not alone in that. Perhaps that’s the power of its influence; not so much it’s rarely mimicked style, but the spirit behind it.  As he supposedly instructed his band when they were rehearsing the material, “play it like a midget’s bar mitzvah!”

On some level, aren’t all the best bands playing it like a midget’s bar mitzvah today?