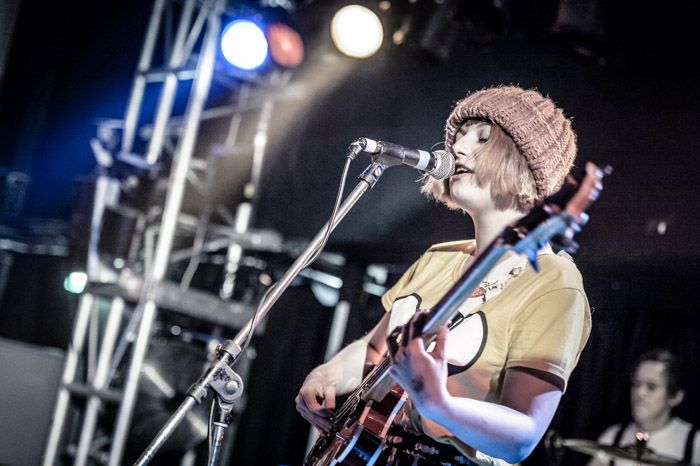 Bathymetry performing as The All at District

With the Jesus and Mary Chain support slots now filled, Getintothis’ Paul Higham takes a listen to Bathymetry who will kick off the tour in Liverpool next week.

As we reported last month, following the cancellation of Eagulls‘ intended support slot on the hugely anticipated The Jesus and Mary Chain tour, the legendary Scottish band made what might just be an unprecedented offer.

Offering perhaps the opportunity of a lifetime, the Reid brothers invited the best emerging bands from each of the cities in which they are scheduled to perform to apply to be considered for a support slot. Along with no doubt many of you, we were eager to see which group would be given the chance to begin the tour in style at the Guild of Students in Liverpool next week.

Well, the lucky recipients are Bathymetry, a transatlantic three-piece hailing from Liverpool and Manchester. You might be aware of the band under their former name, The All, before they were forced to change their name following a legal challenge. The group supported Go Fiasco at District last October and delivered a kookily good set.

The new name, Bathymetry, refers to the topographical study of the ocean floor (we had to google it!), so perhaps it has had the result of adding an extra dimension to the band’s sound. A few hidden depths perhaps?

The band describe themselves as “a fusion of loud and quiet, light and dark…perhaps a little bi-polar” and recent song, Goblin Fruit, is built around a supple rhythm section of jazz-inflected drums and rumbling bass. It is intriguing and atmospheric with a tendency to drift in dreamy circles revelling in its dextrous subtleties rather than seeking a big crescendo.

Daft Bint is a slightly more forceful and guitar-led but possessing a syncopated rhythmic drive and an unconventional structure. The distinctive vocals are there just enough to make you strain in to hear more. There’s definitely something of the C86 era about them; their quirky individuality giving sense to their selection.

I imagine these guys make a bit more of a racket live than on record, their tunes hint at a wall of sound that might take off on the live stage. We will definitely be getting in there early to check them out.

Chatting to Getintothis’ Jamie Bowman ahead of the gig, Ariel who is from Richland, in Washington, said: “We are beyond chuffed to open for the Jesus and Mary Chain.

“It’s an absolute dream come true to play with such a great band and we can’t wait for the 16th.

“We had the honour of playing Alan McGee’s ace Creation Session nights in Liverpool a handful of times after dropping a sketchy demo in his hands on the very first event he put on at District so I suppose that’s why he might have had us in mind (McGee manages the Jesus and Mary Chain).

“When we saw the Jesus and Mary Chain’s Facebook status about the Eagull’s dropping out of the tour we sent an email off right away with our details and crossed the old fingers. We saw the massive response to the status though and knew it might be a bit of a long shot.

“Then about a week later they asked if we wanted the slot and I accidentally threw the ipad down the stairs typing yes. It still works somehow.”

Ariel added: “To add to the excitement we’re due to record our first album in the not too distant future.

“We feel like a bunch of kids at a birthday party!”

Bathymetry will be supporting The Jesus and Mary Chain at The Guild of Students, Liverpool on Monday 16 February.