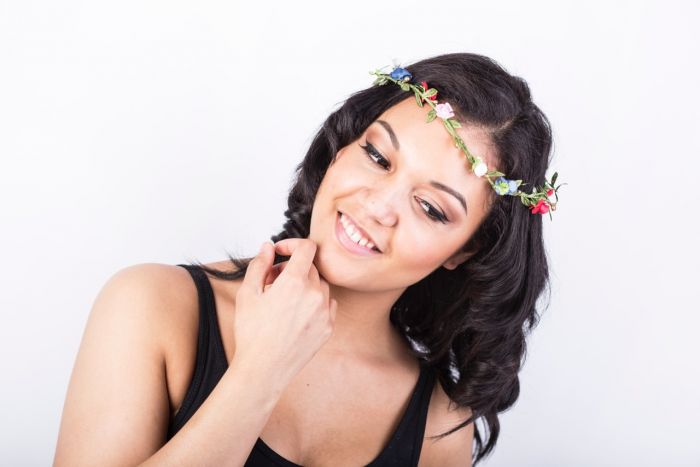 Fawning over the feminist soundtrack of the year, Getintothis’ Emma Walsh catches up with GIT Award nominee #6 Roxanne L Jones.

“I look at men in the industry and it’s easier for them to gain respect. Women have to work that much harder and often get called ‘divas’ for simply being strong and independent and knowing what they want from life.”

At the tender age of 22, R&B songstress Roxanne L Jones already has the underlying sexism of the music industry pinned down to a tee.

She’s witnessed first hand how female artists can find themselves labelled a ‘diva‘ or ‘sassy‘ or similar thinly veiled sexist snubs, simply because they dare to exercise a passion and determination to match that of their male counterparts. Jones has already overcome many challenges in her fledgling career and if her single I am a Woman (due for release March 16) is anything to judge by, she’s not content to be pigeon-holed as just another sassy female artist. There have been inevitable comparisons drawn with Queen B Beyonce but be under no illusion – Roxanne Jones is putting her own stamp on things.

Growing up in Toxteth, Jones says music has always been a big part of her family life. Her dreams of singing stardom began, as they have done for so many: “As a child I would sing in front of the mirror with my eldest sister with our hairbrushes to all the great classics. My sister was very musical and it fascinated me”.

She also took inspiration from powerhouse songstresses Whitney Houston and Mary J Blige, two artists whose vocal power Jones has emulated in her own incredible style. But despite her natural talent and passion for music she admits she hadn’t really considered that she might be able to make a career from her voice, it wasn’t until she was older that she stumbled into the business: “Music has always been a part of my life but I didn’t realise how much I wanted to sing until I entered competitions and started to take music more seriously”.

But just as she was getting started Jones hit the first and perhaps biggest bump in the road. It was during one such competition that she fell ill. In the midst of a competition, Jones had to persist with doctors visits: to get an answer: “They just kept dismissing me, until I got really sick”. Jones was diagnosed with pleurisy, an inflammation of the pleura (the serous membrane surrounding the lungs), and had a perforated ear drum. Understandably, this had a big impact on her singing.

“I didn’t realise until the second stage of the competition. Doctors advised me not to carry on because it would make my condition worse, but I continued because I didn’t want to give up. If you know me you’ll know I’m not one to give up”.

Taking the risk with her health, her determination paid off. Jones was spotted at a competition and signed to rolA Productions. In 2013 she began recording her debut album In My Own Words, a mix of old school R&B, jazz and soul inspired by personal experiences.

By the end of the year she’d released her first track Living a Lie that racked up radio spins nationwide and published an accompanying video that turned heads on both sides of the Atlantic, gaining her recognition and a brief stint with RSG Media in London.

Jones returned to Liverpool to finish recording her album and debut single I am a Woman has already attracted interest from major labels across the globe.

Reflecting on I am a Woman, Jones says: “It’s a very personal song. I had reached a point in my life where everyone was telling me ‘No, give up, music is a waste of time’. I am a Woman was me saying ‘Yes, I have seen good and bad in life. Yes, the music industry is very hard to succeed in. And yes, it’s OK if you don’t believe in me, because I believe in me and that’s all that matters.“

It seems that Jones has had to draw on her own tenacious spirit and dogged determination to get her this far, and there’s no risk of her losing that drive any time soon. This is a woman ever reaching for bigger and better things.

With great ambition comes strong roots, family driven Jones is at no risk of forgetting where she came from. “I have such a great team around me and loads of support. I am very blessed and honoured for the help and support I have received“.

This year looks to be a big one for Roxanne Jones, her GIT Award nomination just one of many exciting prospects on the horizon.

“Right now I am writing a lot of music, I can’t wait for my fans to hear it” she tells us, “I will have a lot of gigs coming up too“. Jones is set to bring her sound on a six city tour (keep your peepers on her Facebook page for upcoming details on that) and next month she’ll begin shooting a video for the new single I am a Woman with Iron Sky to be partly filmed in Sefton Park.

With so much on the agenda, has she had time to take in the nomination and look forward to her upcoming performance at the GIT Awards showcase at The Kazimier? “Firstly I would like to say thank you – it’s such an amazing honour to be nominated,” she said. “I feel very blessed, to have my hard work and my team’s hard work acknowledged. It’s an amazing feeling.”

Despite the drive, determination and ambition that has so defined Jones’ career so far, there’s no doubt that she is still the down to earth girl who started out singing into a hairbrush in front of her bedroom mirror, preserving that same appreciation she had for her sister’s talent that first inspired her when asked about her competition: “Everyone is so talented, it just inspired me to see others doing well. I wish them all good luck.“