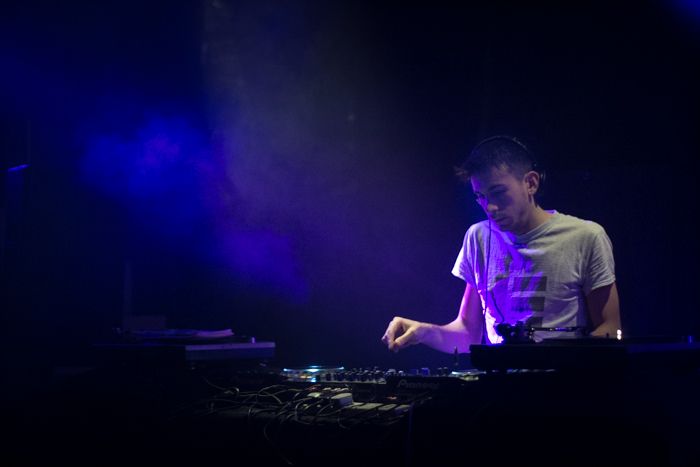 A Less Effect DJ appearance at The Kazimier

Back with his second instalment of dance and club talk, Getintothis’ Martin Hewitt proves a lot can change in one month, even if it’s the shortest month of the year.

The last few weeks have been typified by concerns in club culture over the future of some sacred institutions. As Mike Boorman’s article for The Ransom Note highlights, recent changes to UK laws could potentially put many a party at risk of closure thanks to new powers that can see police ‘predict’ anti-social behaviour, such as noise complaints.

Meanwhile, here in the North West, Liverpool’s Garlands, one of the city’s longest-running regular bashes, was at the centre of a drug-related dispute that saw nocturnal haunt Republik slapped with a closure notice following a raid by authorities resulting in several arrests.

Tough times could potentially be ahead, then, not least if Britain continues with its model of capitalism that gives preferential treatment to big money developers, even when those developments jeopardise the future of creative and cultural organisations.

Thankfully, though, there has been far more positive news coming from the ever-burgeoning electronic release schedule, with an abundance of high-profile, much-hyped and (reassuringly) well-worth-the-wait albums all set to drop in the coming weeks.

First and foremost is the new Late Night Tales compilation, as put together by high-flying man of the moment, Jon Hopkins. A collection that runs the gamut from beautiful serenity to warm beats and infectiously head-bobbing left field rhythms, it veers between the likes of Ben Lukas Boysen– a truly talented pianist who also helped score Gravity- to the 60s-edged acoustics of Alela Diane, whose Lady Divine is the most pleasing folk song you’ll here on any electronic album this month. Oh, and it’s out March 1.

From quality comedown material to something more in keeping with that what makes feet move, Local Talk, the Stockholm-based imprint with a penchant for up front house music and disco-inflected offerings, is preparing to unveil Crescendo, a new album from Crackazat. Landing on March 6, it throws sounds including bleepy-downbeat e-funk (fans of Proviant Audio take note), early-Daft Punk-ish grooves and soulful four fours into the mix, making for an accomplished effort which, weather permitting, will do well on hi-fis and car stereos when summer finally arrives.

A week later and March’s most-anticipated long former finally finds its way into shops. Ramadanman, a mainstay of the Hessle Audio dynasty, dons his Pearson Sound cap for the first time on a full length album, with an eponymous debut that’s both mature and somewhat experimental in parts. Featuring strange off-beat techno, one of the best breakbeat tracks to come our way in years (the understated, drummy Glass Eye), and dubby oddities, it’s well worth checking out, although you’ll have to take our word for that as there are no preview streams available for this one.

Scuba Why You Feel So Low

After all those, Hot Flush bossman Scuba unveils his third full length LP this month, too. Arriving on March 24, in this humble opinion Claustrophobia is the toughest and most dancefloor-focused to come from Paul Rose to date, which makes perfect sense given it was apparently inspired, at least in part, by his experience of Labyrinth, Japan’s techno festival that has a reputation of taking very few prisoners when it comes to tunes.

It has been a busy time on the singles front, too. James Teej– AKA one third of Canada’s My Favourite Robot– drops the Moonstalker EP on March 16. A darkly-tinged workout of scuzzy synths and stepping kick drums, it’s part retro-inspired house, part contemporary slo-mo mood builder, the package comes with another two original tracks, and Inside gets remix treatment by Simon Garcia, Sahin Meyer, and Garnica.

Sharing the same release date is perhaps the highest-profile cut of the month, from non-other than Roisin Murphy. Jealousy is coming out on the monolithic Crosstown Rebels label, with help from The Crooked Man, AKA DJ Parrot (previously of Warp’s Sweet Exorcist and FFRR’s All Seeing I). Sitting on the housier side of the imprint’s output, the single boasts house and disco mixes, and as you might expect from the former-Moloko-singer-cum-superstar-soloist, both are all about the combination of lyrics and groove, although in contrast to her forthcoming album, they are definitely aimed at genre purists.

Rounding things off on a completely different note, the Peverelist-established Livity Sound unleashes more mutant noises the same day. Coming from that label founder and the ever-exciting Kowton, Signal 3/Low Strobe comprises two tracks of rhythmic atmosphere, with the former stopping short of ever properly kicking in, instead melding percussion into something of an alarm-raising outing, whilst the latter combines weighty staccato thuds with airy waves of reversed-out synth to incredible effect. Definitely one to check, as are the following choice North West events…

One for the heads, Levon Vincent– the man behind Deconstruct alongside Anthony Parasole, and his own Novel Sound imprint- touches down for what should be a top party at Kazimier courtesy of the Abandon Silence crew. Expect dubbed out techno and the kind of raw, pared back fours that burrow a way inside the mind and make shoes stomp.

Fumiya Tanaka, Japan’s finest purveyor of minimal techno, and one of the faces who introduced the sound to the Land of the Rising Sun in the early-90s, makes a not-so-common appearance at Camp & Furnace to help Modu:lar celebrate 12 months of debauchery. Meanwhile, Ion Ludwig, who impressed at the first of these events last year, is set to deliver one of those critically lauded live sets.

It takes a lot to make anything work for 15 years, whether that’s marriage or a club night, so Chibuku’s people have obviously been doing something right. And, with an anniversary line up like this clearly there’s no sign of that stopping; Andy C, Annie Mac, Ben UFO, Benji B, DJ Craze, David Rodigan DJ EZ, Four Tet, George Fitzgerald, Jackmaster, Joy Orbison and Oneman being amongst the highlights.

Adapt’s first session of the year sees them draft in the mighty Sleeparchive for an intimate bash at the Soup Kitchen, recently listed in The Guardian’s list of the ten best clubs in the UK. Agree or disagree, it’s a space that packs a massive punch despite its tiny size, and so we’re looking forward to one of Germany’s more innovative techno heads arriving to play. Oh, and fellow countryman Marcel Heese is also on the bill. Proper stuff then.

Perhaps that Guardian list was right after all… either way Daniel Avery means serious, electro-fuelled, fist clenched business, bringing with him the kind of beats that ensure all those back-to-backs he plays with Andrew Weatherall make perfect sense. BleeD’s top man Volta-Face and John Loveless, a Manchester mainstay, are also involved in this one, making for a quality line up to say the least. Hence the reason it sold out a while back…