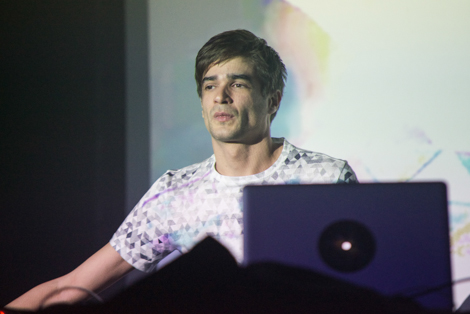 Expletives in the Cathedral, Liverpool’s fastest rising stars in the Moon Museum (!) and Jon Hopkins closing Liverpool Sound City day one in definitive fashion, Getintothis’ Andy Kelly kicks back ahead of Day Two.

While Liverpool’s Metropolitan Cathedral spent Thursday installing the new Archbishop in a wave of religious pageantry, over at the Anglican a beautiful pop singer is shouting ‘FUCK‘ rather loudly.
‘I just wanted to see if it echoed,‘ says Miranda Kilbey, one half of the twin sister combination (she’s dark, Elekra is blonde) at the heart of hotly-tipped Say Lou Lou.
Half Swedish, half Australian, if anything they look even better than that most promising of descriptions and – expanded to a five-piece for this live show – they throw in a stunning keyboardist just for good measure. 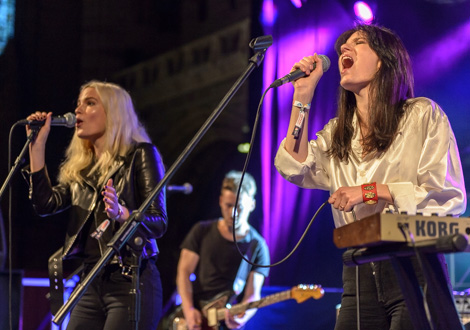 Say Lou Lou performing live at Liverpool Cathedral
We’re sure the band are royally sick of people talking about their looks, but image and sex has been part of rock and pop since well before Elvis started getting people weak at the knees and it can’t be ignored.
But can they back it up with the music? Sadly on this showing, the answer is a definite no.
Their sound is less retro than just plain dated, a disappointingly bland 80s keyboard-driven rock-pop which makes me think only that they could have made a support slot on a Roxette tour when they’re probably thinking Fleetwood Mac.
Both sisters have decent voices and there are hints of promise in new songs Nothing But a Heartbeat and Skylights but it’s not enough to make this an underwhelming start to Sound City 2014. 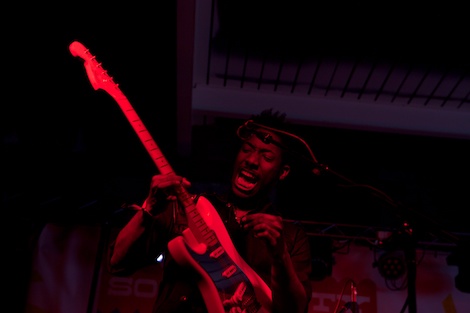 The Bohicas at The Factory at Liverpool Sound City 2014
Thankfully The Bohicas pop along straight away to lift the spirits with a no-nonsense set of rattling indie rock in The Factory.
This Essex four-piece look great, brandishing their guitars like a young Weller, machine gunners about to straff the crowd as they spit out intense, post-punky gems.
They save the best to last, with both sides of their debut single for Domino. XXX is blisteringly explosive but is topped by Swarm where the drummer’s whirling arms all but send him into flight. Game On!
Next up it’s the outdoor Moon Museum stage for VEYU, perhaps the band most on everybody’s lips as Liverpool’s ‘next big thing’.
At their best the band make shimmering dream pop which – were this 1991 – would have everybody staring at their shoes in blissful reverie.
But while the shoegazers would have their guitars building into feedback frenzies, VEYU are an altogether more delicate thing, fey almost, as if auditioning for a slot on Sarah records.
When the guitars jangle I think of those wonderful Mancunian should-have-beens The High just as much as the more obvious influences of say early MBV or Galaxie 500. Sometimes you’d actually like them to let rip, but perhaps the restraint is part of their undoubted allure. 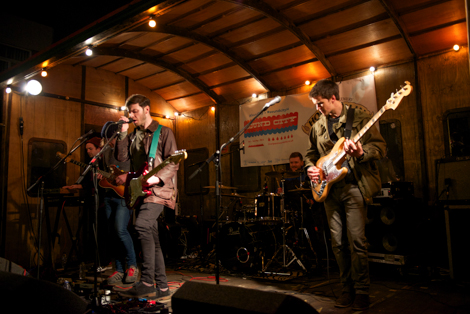 VEYU live at the Moon Museum at Sound City 2014
This is the longest set I’ve seen by VEYU and the second half does drift just a little, not helped by the enthusiastic dancing couple at the front who force the rest of the crowd to stand 10 yards back for fear of serious injury.
Lead singer Chris Beesley‘s likeness to Xabi Alonso is striking but with his band continuing to show great promise there’s no red card for him tonight.
Next up are Slaves in the Duke Street Garage and they are undoubtedly my band of the night. I can hear them before I see them, full-on slabs of in yer face garage punk rock created by just two men but it sounds like about eight.
Singer/drummer Laurie and guitarist Isaac have more energy and attitude than everybody else put together tonight and combine their sound with some great lyrics which have an almost Streets-like quality to them.
And while they may be two angry young men, they also play it for laughs as showcased in the likes of Girlfight, a classic tale of flying hair extensions and nails while walking home with his ‘takeaway dinner’ in Royal Tunbridge Wells.
White Knuckle Ride is just that – and brilliant with it – while OK and Hey are full of shouty attitude and fire. A discovery. 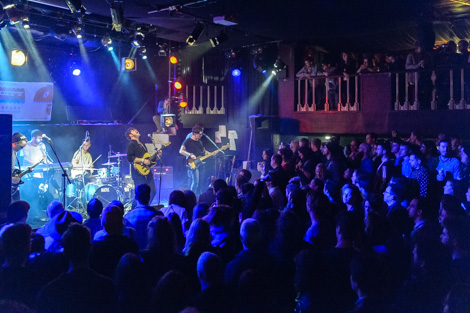 Amber Run performing live at The Kazimier
Over at The Kazimier, Amber Run have attracted a big crowd, though we’re not sure if this is partly because it’s got a bit nippy outside.
The Nottingham outfit are unfeasibly young and seem to have a real gang spirit while singer Joe Keogh has what Michael Stipe would call ‘a great set of pipes’.
The music itself, perhaps because of the strength of Keogh‘s voice, does remind us a little of early Keane, though without meaning that as the insult it might sound and while the band don’t agree, there’s no doubt a bit of folksy Mumford and Sons in there too.
They work best when three or four voices combine into impressive harmonies and there is undoubted talent here, tho it’s all a bit too ‘pleasant’ for us to really take to it.
And so onto the Getintothis Stage at Nation, for what is effectively tonight’s headline act in Jon Hopkins.
Despite his Mercury nomination last year, we have to say that Hopkins‘ rise had largely passed us by and we were eagerly awaiting some of the ambient/dance crossover which has garnered him a strong following. And for at least the first half of the set, we were left rather disappointed.
Playing in front of an impressive video backdrop, Hopkins rather seems to play it safe for this midnight festival crowd and we hear nothing more than some standard build-it-up ravey dance before a huge bass beat gets all the hands in the air.
Thankfully the second part of the set is infinitely better, with Hopkins using some of the vintage equipment he favours to create some unique sounds and dropping in some gorgeous nuggets of electronica, lifting the whole mood while a shape-shifting kaleidoscope unfolds behind him.
This is what we’d come for and eventually we got it. Day 1 – done!
ps: Look – new, shiny Jon Hopkins!