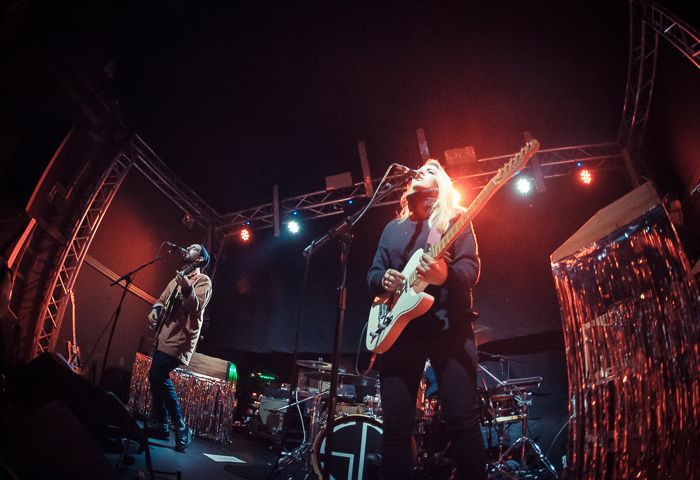 Slow Club at the Arts Club

On a bumper night in Liverpool’s gig calendar, Slow Club’s sweet harmonies and sunny melodies had Getintothis’ Paul Fitzgerald sporting the biggest smile in the city.

Gigs, gigs, gigs, everywhere in town tonight: War On Drugs are holding a sold out O2 in the palm of their hands, The Jesus and Mary Chain’s Reid brothers are busy disliking each other, while performing the sublime and marvellous Psychocandy at Mountford Hall.

We decide, however, to join a packed and grinning throng at the Arts Club, to enjoy another great Slow Club show. And when we say grinning, we mean it. The room was a sea of smiles.

Back with their third album, Complete Surrender, they do what they they do with an understated confidence, and a quiet Sheffield humour.

Slow Club are from Sheffield, though at times it’s difficult to imagine them outside of 1960s Laurel Canyon. Sweeping, intricate sunkissed melodies abound, emphasised by some of the sweetest harmonies available this side of the Mason-Dixie line. Or the Pennines, for that matter.

From the chilled comfort of Everything Is New, which marries these two fantastic voices together so well, to the absolute marvel of Suffering Me, Suffering You, which starts off bringing Nashville to Seel Street before launching into a full on Hammond organ driven Motown stomper, it’s clear that these two lovely people are enjoying their craft, and having a whale of a time creating these great pop songs. Classics in the making.

There’s much instrument swapping, such is the democracy of Slow Club, singers play drums, drummers play guitars, guitarists prod keyboards, and there are more than enough singing voices to go around. Including the massive tonsils and incredible lung power of Rebecca Taylor. Boy, this is some voice – the sheer strength of it had the whole room hanging on each and every word.

After some unplanned mic stand acrobatics, nearly taking out a couple of the front row, Taylor found it difficult to hide her amusement and laughed all the way through the next song. More smiles from the crowd.

As we headed towards the end of a magnificent set, drinking in the splendour and fragile beauty of songs like Wander Wandering and 2008’s Thinking, Drinking, Sinking, Feeling, our only regret was that it wasn’t Christmas. It’s Christmas And You’re Boring from 2009, is a belter Chrimbo classic. The fact that it was February didn’t stop someone shouting for it, though.

So. How to end such a blistering set? Well, all four members of the band could come into a clearing in the tightly packed crowd, and finish with a blinding version of The Pieces from the new album. That would work. Four guitars, four voices, one fantastic finish to a truly great gig.